Our African Penguin - On the List of endangered Species

By Bernd Grahl
It’s surprising to think of penguins in the African heat rather than in colder climes, but the African penguin is endemic to the southern tip of Africa. An unusual flightless bird, ungainly on land, it is an agile master of the water world as it careens swiftly through the water powered by its webbed feet and small flipper-like 'wings'. Because of its loud braying call, it was once referred to as the Jackass penguin. The tough 60-70 cm bird has an attractive black-and-white coloring that serves as camouflage; the white underbelly to disguise it from underwater predators below and the black back from predators above. Its disguise has not protected it, however, from its greatest competitor - man, and African penguin numbers have plummeted over the last century to a fraction of what they were. In 1956/57 the total population was estimated at 141 000 breeding pairs, a number which had decreased by 60% in 2009 to just over 25 000. The Namibian population comprised approximately 5 000 pairs in 2008/9 and the South African, 21 000.Historically, the decline in penguin numbers has been attributed to the harvesting of penguin eggs and the collection of guano. Without the guano layer, penguins are unable to dig their burrows, which protect them from predators and provide cover from the hot African sun. 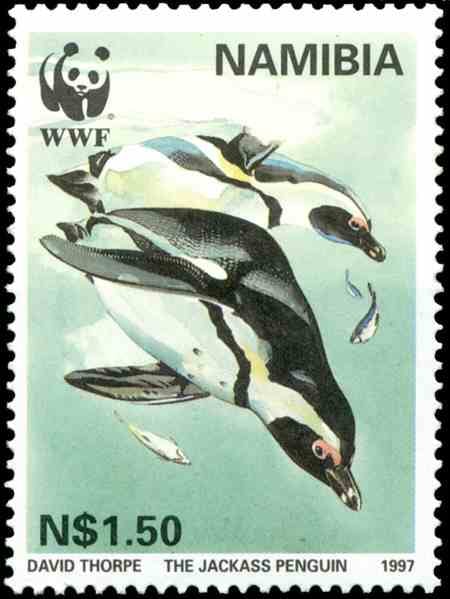 The African penguin is now facing an even more severe crisis - food scarcity, being unable to compete with the commercial fisheries. Many penguin mortalities have also resulted from oil spills. Natural predators include seals and sharks in the ocean and the mongoose, gull and genet on land. The dramatic decline in numbers led to the African penguin being reclassified on the IUCN’s Red List in 2010 from Vulnerable to Endangered.The distribution of the African penguin Spheniscus demersuscoincides with the area influenced by the nutrient rich waters of the Benguela Current that runs up the coast of Africa and the availability of off-shore nesting sites. (Some mainland sites have been colonised in recent years. This has been attributed to an eastward shift of pelagic fish.) Its breeding range extends from Hollamsbird Island, off central Namibia, to Bird Island in Algoa Bay in the Eastern Cape. In Namibia, Halifax Island, Mercury, Ichaboe and Possession islands account for approximately 96% of the Namibian penguin population. Sardines and anchovies, the penguins preferred diet, were overfished in the 1960s/70s making it difficult for penguins on islands like Halifax to find food. The guano layer covering the island was also removed for fertiliser during this period.Several distinctive behaviours are evident in the penguin colonies during the year, most noticeably the annual moult, where penguins fatten-up for weeks before their 20-day starvation period when they are unable to enter the ocean, and the breeding season. In Namibia most penguins moult in April and May, and in South Africa from November to January. 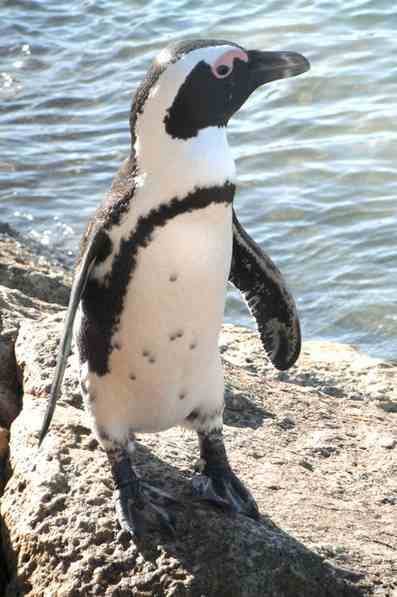 There are also regional differences of breeding season, with the peak of the breeding season occurring in Namibia in November and December and in South Africa from March to May. The African penguin is monogamous, the breeding pair sharing the 40-day incubation and feeding duties. About 60 days after hatching, the chicks’ down has already been replaced by blue-grey waterproof plumage, and from 60 to 130 days the 'baby-blues' are ready to leave their natal colony. They will return after 12 to 22 months, after journeys of up to 1 900 km, to moult into adult plumage.There are 'happy feet' and success stories these days as more protection is being granted to the species, nesting boxes supplied and organisations like SANCCOB (South African Foundation for the Conservation of Coastal Birds) rehabilitating abandoned chicks and oiled birds. Over a hundred birds from Lüderitz were transported to Cape Town in a rescue mission in 2009 where the oiled penguins spent 4 weeks rehabilitating before their release and long swim back to Namibian waters. After 18 days, the first of the group were seen arriving home.