I raced the sun this morning. To the Namib wild horses.

We arrived at exactly the same moment. And were just in time to watch a lone stallion coming in to slake his thirst. The sun caught his mane, the drops on his muzzle and the dust kicked up by his hooves. He rolled in the sand and was off... 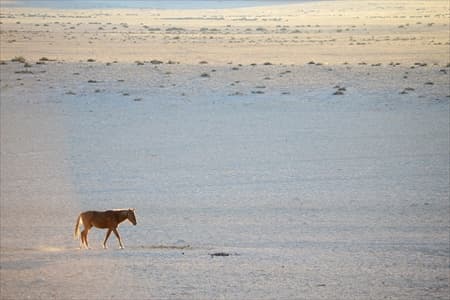 As I sat, enjoying the warmth of the rising sun, waiting for more horses to come in, I thought about these animals that had arrived to this corner of the country more than a century ago, becoming part of the Namibian land that they are synonymous with today.

Horses have had a rough deal – generally. Domesticated 5000-6000 years ago, they have served us loyally for centuries. They have changed the face of history, being used for transport, exploration, agriculture, industry, sport and recreation, war and conquest. Until the advent of the motorcar, civilisation was dependent on the horse and progress was ultimately carried on the horse’s back. We tamed them, used and abused them and then discarded them. 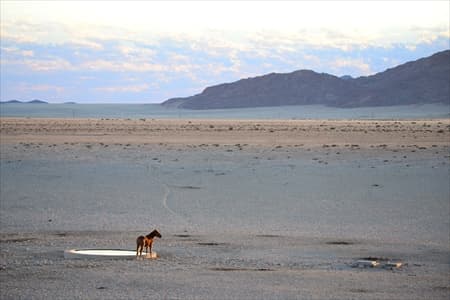 Small pockets of wild horses live on most continents of the world, and with the exception of the Przewalski’s/Mongolian Wild Horses (whose numbers had to be bolstered by breeding in captivity because they were on the brink of extinction), all wild horses originated from domesticated stock.

The Namib wild horses began to form a population during the time of WW1. Their origins were most likely a combination of horses from the Kubub stud farm, 35km to the south-east (photographic evidence from the time shows remarkable similarities between the Kubub horses and the Namib wild horses of today), and horses that evaded capture after the Union forces’ base at Garub was bombed. 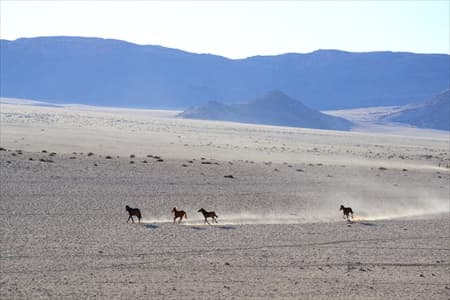 They have formed family groups as they do in the wild and live a tough existence, surviving according to the seasons and the ways of the land. The young, frail and old fall prey to hyaenas and are first to feel the effects of drought, keeping the numbers low and the genetic pool strong. The horses have adapted their behaviour and drinking patterns to the arid environment. (The dynamics of the groups are fascinating; their behaviour has been studied in detail by Telané Greyling who has monitored the population for the last eighteen years.) 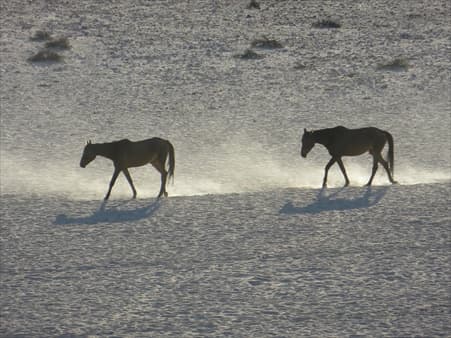 The horses’ remarkable survival deep in the hostile Namib Desert, primarily due to their own adaptability and hardiness, was aided by the inadvertent protection they received living in the forbidden diamond territory, the Sperrgebiet, and by the South African Railways, which maintained the Garub borehole long after trains stopped using steam. A few ‘angels’ also acted as their custodians over the years. (The area where the horses reside has now become part of the Namib-Naukluft Park.) 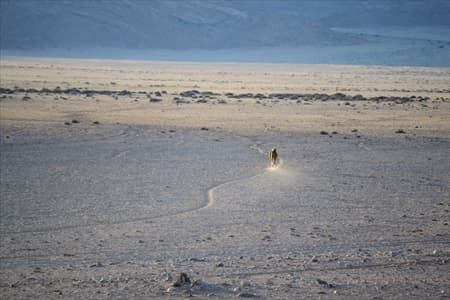 I stopped writing to look up. A group of horses were visible in the distance, coming in to drink. Their excitement was almost palpable. They started to run. Dust flew up from their hooves. It was breath-taking. Time and the world stilled and stopped for a few moments, save for wild horses running across the plains under a true-blue sky.