Travelling off the beaten track, we found sandy backroads that skirted homesteads comprising several huts surrounded by palisades. This was the back and beyond of Owamboland, away from the sprawling shopping centres which were emerging in the towns like mealies (corn) after the rain.

We were up early, too early it seemed for this shebeen-oriented culture and the homesteads were quiet. As the sun rose in the sky, so we began to notice movement as children appeared on their way to school and people began to open their gates to let their cattle out to graze. Soft pastel tones brightened and the countryside transformed into a tapestry of homesteads and butter-yellow mahangu fields dotted with emerald makalani palms and an assortment of trees.

Traditionally, huts were mud thatch-roofed dwellings and the palisade was made from sturdy mopane branches. Today, with the area denuded as the population increases and as the modern world merges with the old, a house made of bricks or corrugated-sheeting is often incorporated and a corrugated-sheeting palisade surrounds the compound. It was refreshing then to visit a homestead and find a woman sitting in her yard breaking open marula nuts to extract the kernels that would later be pounded into the delicious ondjove oil, as it was to see a man weaving a large granary basket according to the traditions of old. Although basket weaving with makalani fronds was considered a women’s job, this tougher work is the domain of men. Skills like these are slowly dying out as western items replace the traditional but, as we witnessed, are still alive in the backroads and beyond, and several basket-weaving groups have been initiated to keep the art and knowledge alive. 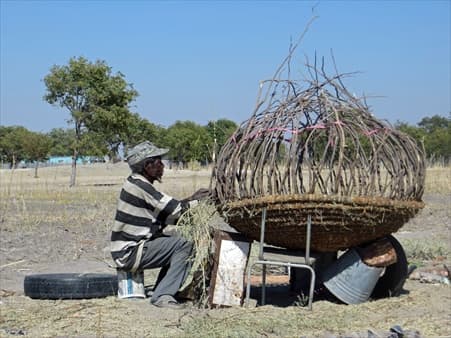 But the elusive Lake Oponona called and we negotiated the track, avoiding drowsy cattle. When we asked astonished locals directions, they responded, “Dis vêr (It’s farrrrr away).” The land became flatter (if that is at all possible) and emptier until we found ourselves travelling through the floodplains. A short crewcut of bleached grass covered the expanse and dried out depressions and sculpted mud spoke of wetter periods. A few oshanas appeared as we made our way westwards following the sun, and herds of cattle moseyed across the expanse to and from these water-bodies. People were fishing with their woven funnel traps for the whiskered, square-headed catfish, walking through the water in the hope of surprising a fish.

Water sparkled and smiles flashed. We continued to search for the lake, until it suddenly appeared in front of us in all its glory. Although it resembled a large oshana in this dry period, the waterbirds skimmed the water, knowing better, and the peace of the lake hung in the air with the pungent smell of cattle dung.

The sun was now sinking into the horizon and we found a lone makalani palm around which to assemble our camp chairs and enjoy the Owambo scene before tackling the sandy roads to find our way back home.