The sun and blue sky finally appeared today, thanks to the gods, angels and all celestial beings!

It was the perfect day to visit Walvis Bay. The 30km drive south is always overwhelming. As you pop out of Swakopmund, you find yourself between undulating golden sand dunes and a sparkling blue sea. ‘Sand’ caution signs appear and areas have been fenced-off to protect Damara tern breeding sites. Halfway is Langstrand, devoid of vegetation except for a few palm trees - and some of those are cellphone towers! After that it’s Dolphin Beach (with even less vegetation) and an ‘aromatic’ guano platform jutting out to sea.

Once a British enclave - and the only deep-water harbour in the country - Walvis Bay was firmly held by the South Africans until they relinquished it in 1994. Although many of the activities around Swakopmund take place here or in the Namib Naukluft Park, further south, the town itself was never a huge tourist draw card. Things have changed in the last few years and a relaxed and charming waterfront area has been developed. This is the place to head for when visiting the town.

A line of palm trees waves you in to Walvis and if you follow the main road until you can’t go any further, it becomes 5th Avenue and leads past the harbour into Atlantic Rd, the Walvis Bay Yacht Club and the waterfront. Most of the dolphin/seal cruises in the Walvis Bay lagoon begin here. Old boats serve as oversized flower pots, vegetable gardens and tables at the rustic Anchors restaurant and a pelican or two from the rehabilitation centre can often be seen waddling about. The newer restaurants and bar (‘Sarah se gat’) share the superlative sea views.

There was something more today though (besides sunshine and charm). Although a group of flamingos occasionally dawdles in the shallows at the entrance to the waterfront, there were now a few flamingos right below where I was drinking a cup of coffee. This was a chance to become better acquainted with the long-legged birds that were scratching and preening (with mind-boggling neck manoeuvres) and falling asleep a few metres from me.

It was only when my camera battery ran out of charge that I moved on towards the saltworks and the road to Paaltjies where they gather during the winter. This year, with little rain countrywide, the birds have assembled en-masse in Walvis. The Walvis Bay lagoon is a RAMSAR site, acknowledged worldwide for its plethora of waterbirds, and today, it was living up to its well-deserved reputation.

The sand in the hour glass was running out. I rushed back to Swakop to walk down the long jetty and watch the sun setting over the sea, a rare and magical experience in the often misty town. Gold floated on the water and ... as if on cue, a flock of flamingos flew elegantly past against the crimson sky. 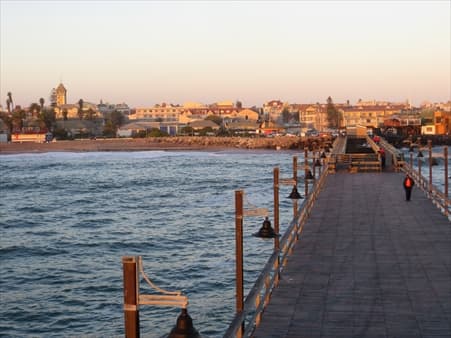