After a day in Windhoek, I had clean clothes, had done what was needed and was ready to hit the road. I made my way along the B2 towards Swakopmund and the coast, full of city blues (it doesn’t take long). Checking my Ron gauges, I found that they were all on low and I needed to plug in to the natural world again. I decided it would be a good idea to turn off 100km before Swakop (as the locals call it) to the Spitzkoppe massif, to re-energise heart and soul.

Spitzkoppe appears after Usakos, Tolkien-like, a world unto itself. It’s a group of friendly-looking granite mountains with the main Spitzkoppe peak distinctive at 1728m, a minor peak called Klein (Little) Spitzkoppe, and the rounded Pondok mountains. Creating an amphitheatre of wonder in between, it is a nature-lover’s getaway. 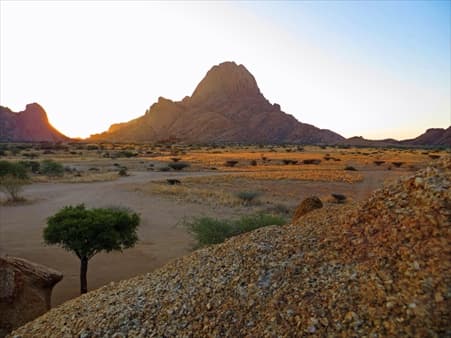 First, I made a stop in Karibib though, en-route to the inselberg (island mountain) and the coast. Artist Anita Steyn has a gallery and studio on the main road where she creates and sells her artwork. Anita was hands-deep in clay when I arrived, making her popular ceramic basins, and I lured her from her work for lunch at the OK store. Although her home language is Afrikaans and mine is English, and neither of us has mastered the other’s language, we managed to get the gist of what the other was saying. What I did understand clearly, however, as I looked at a portfolio of her latest charcoal drawings and watercolours done recently near Rosh Pinah, was her affinity with the natural world and her incredible ability to convey it in art. She is of the opinion that if more people spent time in Nature, connecting with their source, there would be less need for psychologists. Amen to that, Anita.

I looked at my watch, the short winter day was once again flying past and I still had a stretch of tar and a corrugated gravel road to negotiate before reaching the mountain kingdom. I stopped briefly to give a woman a lift to the Spitzkoppe village and to take a few photographs as the mountains appeared before us. The sun dipped behind the granite dome as I pulled up at a campsite. Moments later, I noticed a full moon rise in the sky to the east. Breathtaking!

The night was perfect. Still, clear and warm. I lay on a warm rock for a while in the moonlight, nestled in the love of the land. Barking geckos called their mates and for a while I could hear the mumble of campers further away. Dreamtime was calling and I had to leave the perfection of the night and close my eyes. As I curled up, I remembered a line from a film about the Bushmen/San called ‘My Hunter’s Heart’, which had been aired several times on South African TV. It played through my head as I gave thanks for the day and the good Earth, and all the blessings in my Life that enabled me to be here at this time:

‘The sunset has seen me, the sunrise will find me.’