Black Eagle - A magnificent Doyen of the Hills and Mountains

The black eagle or Verreaux’s eagle, as it’s officially called, is one of four large African eagle species – the others being the martial eagle, crowned eagle and our national bird, the African fish eagle - each specializing in a different ecosystem.

This king of the skies inhabits mountains, hills, cliffs and broken rocky habitats throughout southern and eastern Africa, from Table Mountain to Israel, excluding the Kalahari basin. There are about 500 to 1000 pairs of black eagles in Namibia, from the cliffs of the Orange and Fish rivers and the Karas Mountains in the south through the western escarpment belt, the Khomas Hochland, the Waterberg, Kaokoveld and to the Kunene River in the north.

Verreaux’s eagle, Aquila verreauxii, has a wingspan of about 2 m and like most birds of prey ('raptors') the female (±4.5 kg) is larger than the male (±3.7 kg). One of the reasons for this may be because smaller males are more agile and proficient hunters, while females need a good supply of body fat reserves to incubate eggs and brood small nestlings for long periods.

The eagle’s main prey is the rock hyrax or dassie. In some areas where hyrax are plentiful and readily accessible they may comprise 90% or more of the eagle’s diet while in other areas they comprise as little as 50%, with other medium sized mammals (e.g. hares, rabbits, small antelopes) and medium to large birds (e.g. guineafowl, francolin and bustards) making up the balance. Verreaux’s eagle will also scavenge. It sits imperiously on top of a carcass which, if it is a sheep, leads farmers to assume that the eagle killed the animal.

Seven such incidents were investigated with farmers and in six it was found that the sheep died of other causes, mainly predation by domestic dogs, birth problems or disease. In the 1970s and early 1980s farmers in the Karas Mountains, because of perceptions of small-stock predation, largely eliminated Verreaux’s eagles from the area. This resulted in an explosion of rock hyrax, which ventured out far from their rocky areas over the plains where they competed with small-stock for grazing. (Twelve hyrax eat the same amount of grass as one karakul sheep.) Once the Karas farmers understood this they started protecting Verreaux’s eagles and today the Karas Mountains once again supports a healthy population of this magnificent eagle. 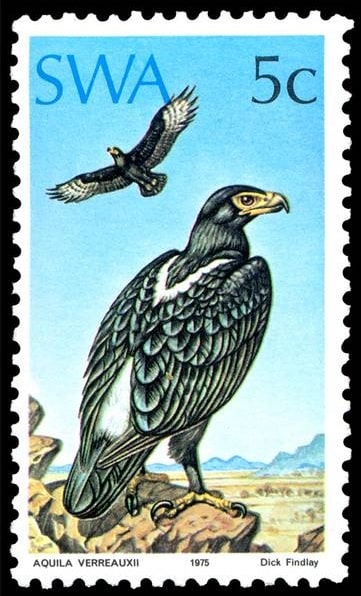 The nest is a large stick platform lined with green leaves, usually built high on a ledge on a sheer cliff face, safe from baboons. Verreaux’s eagles are monogamous, forming lifelong pair bonds, and are territorial, defending their home range. Breeding starts in late April and May with spectacular courtship flights and displays. The peak egg-laying season in Namibia is June and most clutches comprise two eggs. The eggs usually hatch 2-3 days apart after an incubation period of 45 days.

On hatching, one of the most interesting biological events takes place. The first chick to hatch, which is larger and more developed, attacks the second in what has become known as the Cain and Abel struggle. Reasons suggested for this are that the second egg serves as a reserve in case the first is infertile and that one fit young eagle has a better chance of surviving and ultimately rearing offspring than two less fit young eagles. The fledgling leaves the nest for the first time at about 95 days after hatching, and is chased from the territory about 30 days later.

Verreaux’s Eagle is listed as 'Near Threatened' on the Namibian Red Data list because of persecution from small-stock farmers and because it is vulnerable to the use of poison, usually set to kill mammalian predators of small-stock. It is a sad fact that, for every target species killed in this way, over a hundred non-target scavengers are poisoned, most of them vultures and scavenging eagles. Fortunately, because of the remote mountainous terrain in which they live, the population of Verreaux’s eagle in Namibia is stable.