The Dorslandtrek (II) - Commandant Lombard and his group

By Bernd Grahl
The previous issue discussed the futile efforts of the first Trek Boers to establish the Republic of Upingtonia around Grootfontein.
Although the Republic of Upingtonia, which was founded in 1885, was short-lived, it formed the basis for later Boer-settlements in the Grootfontein District. The German government also recognized the validity of the land purchase made by W.W. Jordan. The South West Africa Company, which was founded in 1892 in London, became the beneficiary of its concessions, which mainly included mining rights and the development of roads and railways, as well as the partition of land into settler farms.In 1891, some Transvaal-Boers, amongst them commandant Jean M. Lombard and B.D. Bouwer, who had occupied the farm Strydfontein during the time of the Republic of Upingtonia, requested the German Consul in Pretoria to settle in 'Damaraland'. They also asked to return to their former farms in the Grootfontein District. The area however, had changed owner and now belonged to the South West Africa Company. 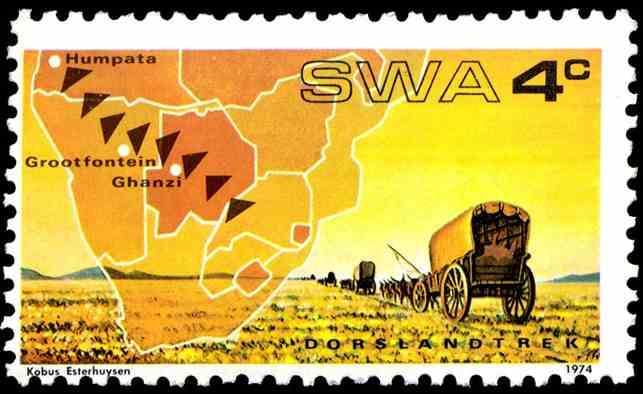 In March 1892, some one hundred Boer-families left Transvaal and trekked via Rietfontein, along the border of Hereroland and Otjituwo to Grootfontein. Most of them proceeded further to Angola. Forty families stayed behind and were subsequently settled there in 1893 by the representative of the South West Africa Company, Dr Georg Hartmann. The S.W.A. Company was most accommodating towards the Boers, as they wanted to keep them there. They were encouraged to purchase land, for which they were allowed to pay in the form of cash and/or farm products.According to Dr Hartmann, there were 98 Trek Boers living around Grootfontein in October 1894. J.M. Lombard, C. de Jager, G. Kriek, I. du Toit, D. Jordaan and M. Botha were living at the fountains of Grootfontein, while H. du Plooy, A., H. and B. Smith, G. Fourie, H. Joubert and J. Diderikzen occupied the farms Volstruisfontein, Gemsboklaagte, Kereefontein and Kalkfontein. As from 1895 more farms, some of which had already existed in the 1880s, were allocated to the Boers. Among them were Strydfontein, where commandant Lombard settled, Venterspost, Kransfontein, Spitskoppe, Jagersfontein, Uitkomst, Khusib, Okamambuti(fontein) and Olifantsfontein, where the German farmer Carl Heinrich Schulz settled in 1896. Other Boers, who arrived from Omaruru, included Dreyer, de la Porte, Nieuwenhuizen, Barnard, Siemens, Britz, Poolman and Prinsloo. 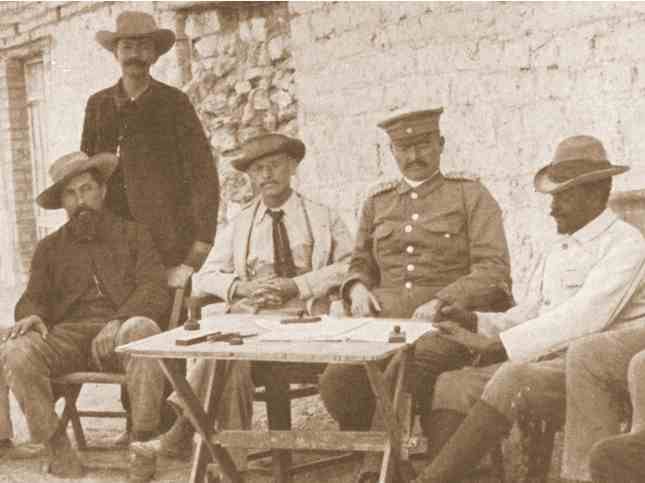 In August 1895, the German governor Leutwein visited Grootfontein and found a ‘friendly Boer settlement’there. During his visit the northern border of Hereroland was demarcated. Furthermore an agreement was signed with the Boers, which stipulated that 40 families, who had to become German citizens, would be allowed to settle on the land of the Company. They also had to commit themselves to permanent settlements and perform military services.In September 1895, Lieutenant Steinhausen was dispatched to Grootfontein to become the first District Head. 1896/97 brought some excessive rains, which was followed by a severe fever epidemic in Grootfontein. Although the Boers had erected 6 dwellings and a church already, many of them left the unhealthy place and settled at Omaruru. Meanwhile Dr Hartmann and Lieutenant Steinhausen had also left. Dr Philaletes Kuhn, who became Steinhausen’s successor as from 1897, laid dry the swamps and thereby improved the health situation in Grootfontein, which prompted the Boers to return. As they did not have a market for their products, many of them made a living by becoming transport drivers. In 1899, Grootfontein became an independent district from Outjo.

Commandant Lombard remained a renowned and leading personality in Grootfontein throughout his life. He was not only instrumental in founding the first school of the district in 1900 at his farm Strydfontein, but was also elected into the German 'Landesrat' in 1906 as representative of the Boer community in the country.