Save 30% on all Gondwana books!

“To understand the present you must know something of the past.”This was the opinion of Lawrence Green, one of the first travel writers in southern Africa. He proved that writing about history does not need to be prosaic and boring. Quite the opposite: it can make fascinating and enlightening reading.With the Gondwana History series Gondwana followed in Green’s footsteps.

Gondwana History was originally intended as a series of articles on captivating occurrences in Namibia’s past, to be published once a week by the local dailies Republikein and Allgemeine Zeitung. The project was launched in August 2010. With resounding success!

Requests from readers, asking for copies of a story that they had missed in the paper, started pouring in and the series developed a life of its own. Gondwana reciprocated with a compilation of the stories in the book ‘Gondwana History - Memorable Moments from Namibia’s Past’.

How is it possible that a coughing train steward served death to hundreds of people? How did the camel thorn tree get its name and why is a rocky outcrop called Murder Hill? Did you know that back in 1910 a shipping route was opened from Lüderitzbucht to New York? That the small piles of rock found next to roads in southern Namibia honor Haiseb, a Nama deity? We dealt with these topics in an entertaining and colorful way. And there were many more: a farmer’s wife who attempted to wrestle down a lion with her bare hands; farmers who employed rain rockets and aircraft for cloud seeding; an armed robbery and murder at the Kupferberg road which kept the population of German South West Africa in suspense...

So many intriguing episodes from Namibia’s past... And what an inspiration for our readers! They sorted through old documents and photo albums and told us their own stories. We bundled 250 tales, attractively packaged, into five Gondwana History editions. Number six is in the works. The stories are in random order, self-contained and richly illustrated. They convey different facets of our country’s diverse history, culture and natural environment.

Riding the crest of enthusiasm, another project along similar lines was born in 2011 in cooperation with Nampost and the newspapers Republikein, New Era and Allgemeine Zeitung: ‘Stamps & Stories’ yielded another 100 stories, in this case related to our Namibian postage stamps which are among the most beautiful in the world.

Both of these projects were initiated by Gondwana’s Managing Director, Mannfred Goldbeck, who used to teach history and geography. He is passionate about Namibia and wants to share his enthusiasm for this country and its inhabitants with as many people as possible. Thus it does not come as a surprise that each of Gondwana’s 14 accommodation establishments all over the country sport a unique design. Each lodge features a different aspect from Namibia’s past to provide an unforgettable experience to its guests. 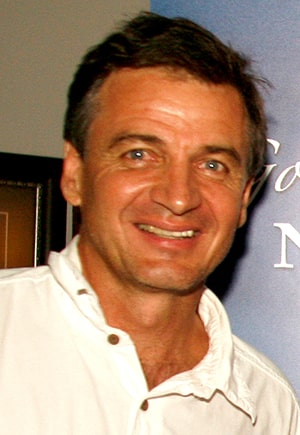 Among the most notable examples are the bar and restaurant of the Etosha Safari Camp. They are styled like a shebeen, a typical socio-economic and cultural phenomenon in Namibia, which was also covered in the Gondwana History series. The story of the (formerly significant) heavy old ox wagon which adorns the restaurant of the Canyon Village was told as well.

“Passionate, authentic and sincere we make Namibia’s history come alive. Our guest becomes part of this magic and the stories become part of him”, says Mannfred Goldbeck. “With the Gondwana History series and the many other publications of the past years we also made a valuable contribution towards preserving Namibia’s natural and historical heritage and passing it on to as many people as possible. We will continue to do so, but right now it is time for us to turn our attention to other projects. This is our last item in the Gondwana History series, and it provides a unique opportunity to extend the most sincere thanks to everybody involved.”

Gondwana History was a team effort. Numerous members of the team members were directly involved in researching, writing and translating the stories and publishing the books. Thank you all for your fantastic input - and special thanks to those who participated during the whole four years: Christina Rockstroh, Ron Swilling, Inke Stoldt, Errol Hurter, Iris le Roux, Clare Galloway, Antje Otto and Walter Rusch.

Sincere thanks to the newspapers Republikein and Allgemeine Zeitung and to John Meinert printing for their excellent cooperation. A big thank you is also due to Gunter von Schumann, Trudi Stols and Werner Hillebrecht who - with endless patience and expert knowledge - haveled us through the wealth of material preserved by the Namibia Scientific Society, the Scientific Society Swakopmund and the National Archives. And thank you to the many private individuals who contributed their memories and personal photos to the Gondwana History series. 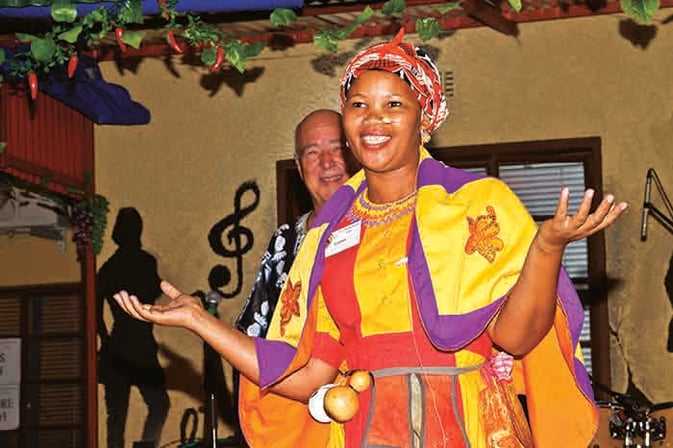 Narration as part of the company culture: Gondwana’s Alwina Naris in action. In the background the South African author and narrator Dr Dorian Haarhoff who conducted ‘wordshops’ at the Gondwana Lodges.

“Thank You” Special - Save 30% on all Gondwana books

All books of the Gondwana Collection will be on sale in November. On 31 October the last story of the Gondwana History series will be published in the newspapers Republikein and Allgemeine Zeitung.

Since 2010 we bundled more than 200 tales, attractively packaged, into five Gondwana History editions. Number six is in the works and will be the last book of the series. The stories convey different facets of our country’s diverse history, culture and natural environment.
Thank you to the many private individuals who contributed their memories and personal photos to the Gondwana History series and last but not least to our readers who took a keen interest in our publications.

The specials are valid from 1 until 30 November 2014 at all Gondwana lodges and at the Gondwana Travel Centre, Nelson Mandela Ave 42, Klein Windhoek.