January 1905. The steamship Professor Woermann lies in the roads off Swakopmund. Leaning against the rail young Schutztruppe soldiers, bound for Lüderitzbucht, are staring at the aspiring harbour town.

From 1905 anchorage in Swakopmund was shifted from the harbour a little to the south, where a wooden jetty had been built. In 1912 construction of an iron jetty started right next to the wooden one.

One of them is Albert Plietz: “The first glimpse of the mainland was a very desolate one. There was nothing to meet the eye but the yellow sand of dunes. At that moment probably most of us wondered what we had let ourselves into. It was really saddening to see the look on the comrades’ faces. The sun was hot as hell. Hopefully the south is better, because everybody was glad that they did not have to disembark here, in Swakopmund.” This even though Swakopmund is boasting 40 houses at the time, making it a rather sizeable place compared to conditions elsewhere in the German colony.

Swakopmund was created out of necessity because the German colony urgently needed a harbour. The bay 30 km to the south, Walvis Bay, was already in British possession when South West Africa was declared a protectorate of Imperial Germany. In 1892 the Reichskommissar (commissioner) of the German colony, Curt von François, started to search the central part of the coastline for a site suitable for a harbour.

“After the way he sounded off in August 1889 it was to be expected that the Cape’s official in Walvis Bay would do anything to prevent troops and munitions from passing through in transit. He was less interested in preventing the passage of provisions for the troops since most of the provisions were shipped from Cape Town. It was advantageous for Walvis Bay that the settlers spent their disembarkation fees etc. on British territory, had to find their first accommodation and buy their first necessities there. More than ever it therefore seemed vital to me to build landing facilities in Swakopmund in the near future.” (von François 1899, p. 157)

On 4 August 1892 the crew of the gunboat Hyäne discovered a spot where the coast could be accessed – later the pier (Mole) was built there – and marked it with two beacons. This date is celebrated as the day when Swakopmund was founded. Another reason for building a harbour in this particular spot was the availability of potable water in the Swakop River mouth nearby. Von François set up a military station slightly to the north, which consisted of accommodation facilities and a storage shed put together with corrugated iron.

The surf boat and eleven Kru sailors, requested by von Francois for the landing operations in Swakopmund, arrived in January 1893. In August that year the first steamship, the Marie Woermann, called at Swakopmund with 120 Schutztruppe soldiers and 40 settlers onboard. 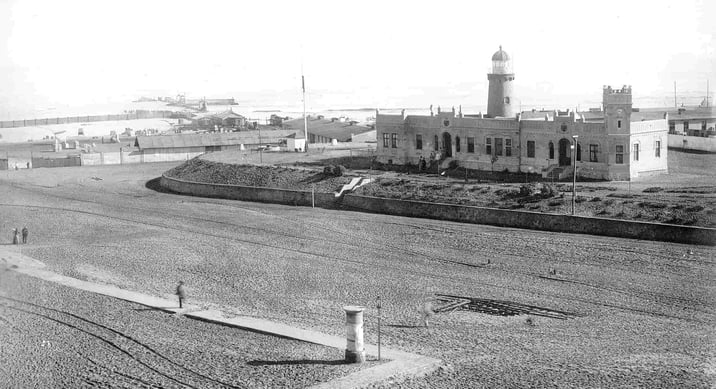 The lighthouse and the district office (Bezirksamt) in 1905 overlooking the pier (Mole) and harbour cranes for unloading shipments.

The Walvis Bay trading company Mertens & Sichel opened a branch in Swakopmund in 1893. The following year 19 inhabitants were recorded for the settlement. One of them, Kurd Schwabe, who was appointed station commander of Swakopmund in the end of 1893, described life between the desert and the sea in a letter to his family back home.

“My abode consists of two parlours (if you want to call them that), a larger one and a hole where I have set up my bed. (...) Windows – none, but the wind makes up for that and whistles through a thousand gaps. Every now and then I take the time to plug the cracks with tow, assisted by Schneidewind. In the absence of floorboards the floor is the fine sand of the higher lying area, teeming with millions of sand fleas. Boxes and crates serve as furniture, some of them for sitting on, others for storage. (...) Barely 20 paces from my palace towards the sea a cave has been dug into the sandy precipice of the higher level and boxed up with boards. The roof across huge whale bones, which you find scattered everywhere in the sand, consists of corrugated iron, pieces of sailcloth and scraps of roofing paper covered with a layer of sand. This is not the dwelling of jackals, oh no, but that of a father and son by the name of Unglaube. They have set up their field smithy in front of their mansion. Both are industrious and skilful, making good money with wagon repairs and similar.”(Schwabe 1904, p. 115f)

In early 1895 the Damara & Namaqua trading company arrived on the scene, built three accommodation facilities and set up its business. Soon afterwards the first zoning map was designed for Swakopmund, a postal agency was opened and a scheduled postal cart connection to Windhoek was established. Now the little settlement started to grow; in 1897 it had 113 registered inhabitants.

In 1897 construction work started on the narrow-gauge railway line to Windhoek. Each kilometre of railway that edged forward through the Namib towards east shrunk the distance which had to be covered by ox wagon. Railway traffic from Windhoek to Swakopmund started on 19 June 1902, boosting the economy. The long waiting periods for transport opportunities inland had become a thing of the past.

Soon afterwards the pier (Mole) in Swakopmund was completed. It had taken three-and-a-half year to build. Inauguration festivities took place on 12 February 1903. Steamers finally moored in the harbour now. Together with the pier the lighthouse was put into operation. Initially 11 m tall, its intermittent light was visible 14 sea miles out at sea. The German colony was proud of its artificial harbour and the railway line into the interior. And Swakopmund’s inhabitants were very pleased that they scored a water pipe when the harbour was built. 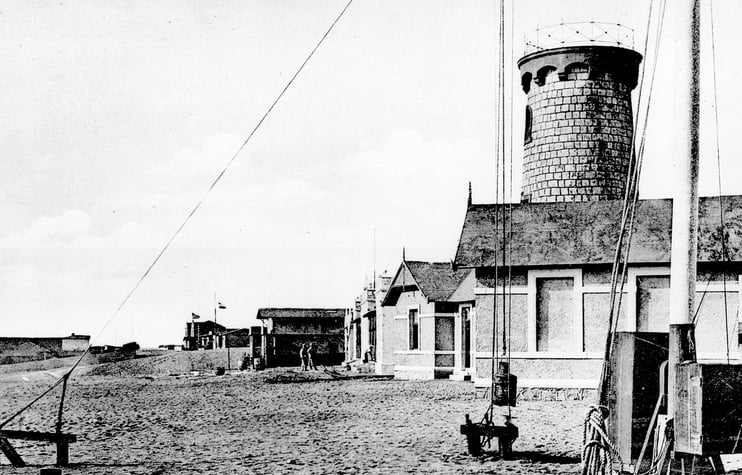 Swakopmund’s first lighthouse around 1900. In the following ten years it was raised twice.

After the turn of the century colonial-style houses were built of stone. Previously the street scene had been characterised by prefabricated wooden structures. In 1901 the railway station was completed; the building is part of the Hotel and Entertainment Center now. Other historic buildings include Ludwig Schröder House, built for the Woermann Shipping Line in 1903, and Woermann House with its striking tower and two gables. Completed in 1905 as headquarters of the Damara and Namaqua Trading Company this building was originally known as Damara House.

Elisabeth Brock, who arrived from Germany in December 1903 with her husband, described Swakopmund with approving words: “Early on Monday, the 28th all passengers were taken ashore with the large lighter. (...) Swakopmund looks quite impressive even from a distance, and on arrival I also found it to be a very pleasant place. There are several charming buildings - the railway station, the lighthouse and the telegraph office are particularly noteworthy. A beautiful large store is being built for the Damara Company. It looks similar to the shipping line’s premises in Hamburg (...). Of course you are still wading through sand a lot but there are already quite a few cemented sidewalks and proper steps to the higher lying streets, even some facilities and gardens.” (Brock, s. 16)

Since the pier silted up more and more, to an extent where after just two years steamers were rarely able to sail into the harbour, a newly-built wooden jetty was taken into use in 1905. It soon became clear that this structure would not be able to defy the forces of nature for very long. In 1912 construction work started on an iron jetty right next to the wooden one. The new jetty was to have a total length of 640 m, but when it was 262 m long the First World War put a sudden end to construction work. Imperial Germany lost its colony in south-western Africa. Naturally, the subsequent South African administration used the deep-sea port of Walvis Bay. Swakopmund lost its importance as a harbour town and turned into what it still is today: the most popular holiday resort in Namibia.

The Gondwana History series is a selection of memorable glimpses of Namibia’s history. Collections of the stories are also published as several small volumes in English, German and Afrikaans. Gondwana History III is available since early June at the offices of the Gondwana Collection in Klein Windhoek (42 Nelson-Mandela-Avenue), all the Gondwana lodges and in bookshops.