If postage stamps could talk they would have lots of stories to tell... In this book they actually do.“ This is what the text on the back cover of the book „Stamps & Stories“ promises. The book was published by Gondwana Collection Namibia in cooperation with Namibia Post Limited and was launched yesterday [Monday evening, 19th November 2012]. 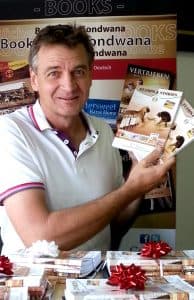 Stamps & Stories contains 50 entertaining and illustrated stories related to pictures on Namibian postage stamps - stories about the dangerous life of postal runners almost 200 years ago, about exploding mushrooms or the medicinal properties of Devil’s Claw, about the gladiator insect which was discovered only recently, a reluctant steam ox, the Mbalantu woman’s braid touching the ground or about Brukkaros Mountain, the false volcano. Covering the country’s natural environment, culture and history in a colorful mix, this book is a Namibian portrait resembling a mosaic which here and there may even surprise those who know the country inside out.

Namibia’s postage stamps are without doubt among the most beautiful in the world. They have won various prizes in international competitions. What is more, the stamps portray the country in its many fascinating facets: plant and animal life, attractions and population groups, public figures, achievements and history.

“Every significant event in Namibia, before and after independence, has been commemorated with a stamp”, said Festus Hangula, the managing director of Namibia Post Limited. “The fascinating stories of the country’s natural environment and history can hardly be told in a more vivid manner than this,” added Mannfred Goldbeck, the managing director of the Gondwana Collection Namibia group of lodges.

Against this background it was obvious that the stories behind the postage stamps should be told and a partnership between NamPost and Gondwana seemed like the way forward to this purpose. There are similarities between the two companies: both of them bring people together, they promote Namibia throughout the world and both advance the country’s development.

And so the weekly “Stamps & Stories” series was launched in four Namibian newspapers in September 2011. Every week a brief, entertaining and exploratory story relating to the picture on a particular stamp would be published. From the readers’ response it soon became clear that these stories were being very well received. Some readers began cutting out the weekly installments for safekeeping. There were also many requests from readers for copies of a story which they had missed for some reason or another.

This triggered the idea of publishing a collection of the stories in book form. While the weekly installments would ensure that Namibia’s beautiful stamps did not remain hidden in the albums of a few collectors but were made available to the public at large, a book of the collection annotated with fascinating stories about the natural environment, culture and history would safeguard them for future generations. With the book “Stamps & Stories” NamPost and Gondwana therefore make a valuable contribution to the preservation of Namibia’s natural and historical heritage. This is the first volume containing the first 50 stories. Further volumes are to follow.

For NamPost, this book combines their past, present and future. The first two stories are a memorial to the postal runners, the pioneers of 19th century postal services in Namibia. This volume also marks the 20-year jubilee of postal services in Namibia since independence, and the enthusiastic response of readers at home and abroad shows that the appeal of letters and postcards remains undiminished in the age of email.

For Gondwana, “Stamps & Stories” is another title in a series of books that Namibian and foreign guests can buy at Gondwana lodges to complement their stay, as an addition to the library at home, a memento of a wonderful holiday or as a gift.

The book is product of a team effort with a lot of contributors: Mannfred Goldbeck with the idea for the project, his stamp collection and research; project manager and author Sven-Eric Kanzler; authors Antje Otto, Ron Swilling, Alfred Schleicher and Chris Brown; designer Heike Lorck (cover and inner pages) and Inke Stoldt who prepared the book for print.

For their assistance for research Gondwana and NamPost like to thank Gunter von Schumann, Trudi Stols, Konrad Schüllenbach, Walter Rusch and Kuno Budack. A sincere word of thanks also goes to the National Archives and the National Museum, the library of the Namibia Scientific Society in Windhoek and the Sam Cohen Library in Swakopmund.