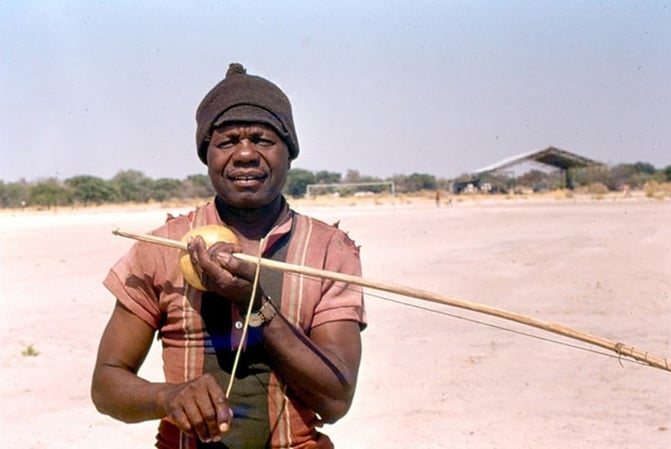 The curved bow is made from a branch of the omuhongo tree (Spirostachys africana), while the string is made from sinew or wire. The bow and the string are braced together by a small piece of string whereby the string is pulled closer to the bow stave and is divided into two lengths. The resonator, which usually consists of a hollow calabash, is fastened in the center of the bow or closer to one side. It has a large hole on the one side and a tiny hole on the other, through which it is fastened to the bow. A small cloth pad is sometimes placed between the bow and the calabash to prevent rattling. A cracked calabash resonator can be mended by neatly drilling holes along the crack and sewing over the crack with sinew.

When played, the bow is usually held horizontally with the string facing away from the player. The bow stave and the open end of the resonating chamber are pressed firmly against the chest with the left hand while the string is played by striking it with a stalk of omaoloolo grass or a small wooden stick held in the right hand. Pressing the string with the first finger produces different tones, while the thumb nail works as a stop. Increasing or decreasing the pressure of the calabash against the chest can also change tones. By moving the brace slightly with the small finger ‘fine-tuning’ is achieved. The okambulumbumbwa is played by men only and is always used singly, accompanying a deep vocal drone produced by the player. Three or four different notes can be played on the instrument, and the rhythm can also vary. Although the sound is not very loud, it can be heard some distance away. 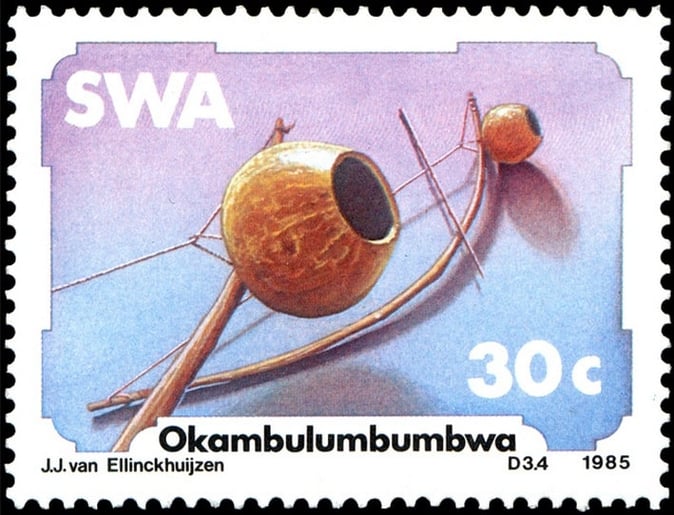 Musical bows are often handed down from one generation to the next and old instruments are today highly prized. The National Museum of Namibia possesses one example of the okambulumbumbwa, which was collected by Sybil Bowker during the 1920s.

Another musical bow, played by women, is the so-called okayaya. The bow of the instrument is shaped like a hacksaw and it has notches cut into it. The string usually consists of a piece of palm leaf which is secured at the one end to the bow by a knot, while the other end is wound around the protruding point of the bow stave a few times until the tension is correct. During a culture festival in 1976 it was observed that the player had wound the end of the palm leaf around her thumb instead. The bow is played with a small stick, which is scraped across the notches. The mouth serves as resonator.

An unusual musical instrument, the so-called ekola, was only known from the AaKwanyama, where it was played by medicine men. It consisted of two or four hollow calabashes, which were glued together in sequence from big to small to form the resonating chamber. The largest calabash had a hole at the top. A curved stick of palm rib, which was notched, extended over the length of the calabashes. The sound was produced by rubbing across the notches with a short thick stick and a bundle of long very thin sticks alternately. Before 1940, the National Museum of Namibia managed to obtain a fine example of the ekola, consisting of four calabashes, which unfortunately became damaged. Another example with two calabashes can be viewed in the Swakopmund Museum. Other musical instruments used among the AaWambo include the big and smaller drums carved from wood of the omunghete tree, lamellophones, kudu horns blown during rites as well as gourd and ankle rattles.