The Mbalantu live in the extreme northern parts of the Omusati Region and part of their tribal area extends into southern Angola. As they take a rather insignificant position among the OshiWambo-speaking groups, they were neither frequented by early traders during the nineteenth century nor did they participate in the agreements, which were signed between the German Government and various OvaWambo chiefs in 1908. Mission stations were also only founded much later, which contributed towards the Mbalantu having retained some of their traditions, e.g. the skills to make handsome pottery and the rather spectacular headdresses of their women, for a much longer period of time than some of the other tribes. At the age of approximately twelve years, Mbalantu girls started preparing their hair for later headdresses. As among the Ngandjera and Kwaluudhi, the Mbalantu girls also covered their hair with a thick layer of finely ground tree bark of the omutyuula tree (Acacia reficiens), which was mixed with oil. The mixture was applied to improve hair growth. A few years later the thick fat-mixture was loosened so that the hair became visible. Subsequently, fruit pips of the bird plum were attached to the hair ends with the aid of sinew strings. 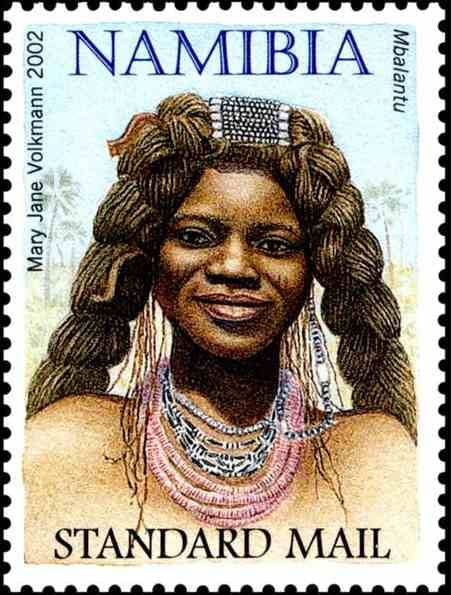 If a girl had reached the age of sixteen years, the headdress consisting of fruit pips was discarded and instead long sinew strands, which often reached the ground, were attached to the hair. According to reports dating to the early 1900s, some 80 strings of sinew were sometimes used.

Just before the girls could enter the ohango initiation ceremony, the long sinew strands were converted into two or four thick plaits, which were known as eembuvi. They were hanging down on the sides of the head and at the back. Sometimes small ornaments, which were adorned with white porcelain beads, were attached above the forehead at the base of the plaits. If one considers that the plaits remained part of the head of the girls for day and night, one can imagine the extreme exertion the young girls had to go through during the initiation ceremony, which was just about to commence. 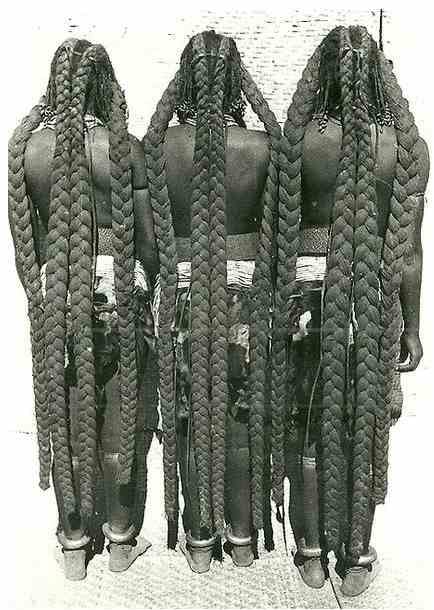 If the girls had managed to proceed through the initiation ceremony, they were called "brides" (ovafuko). At this stage another thick layer of ground tree bark and fat was applied onto the head. Various ornaments made from beads were attached on top. Finally, the long plaits were taken up and arranged in a specific manner along the sides of the head and at the back, where they were attached. According to historical reports this headdress was a "mighty coiffure" and its weight was of such nature, that the upper ends thereof were often attached to a piece of rope or skin, which was fastened around the forehead in order to distribute the weight more evenly. The front edge of the coiffure, which was known as omhatela, was often decorated with a band of large, white beads (omawe gomupolo). At the back just below the omhatela a leather strip decorated with cowrie-shells was also sometimes attached. The young girls were now regarded as married. The omhatela-coiffure was often worn long years after marriage.