By Bernd Grahl
Few tortoise species are as well-known as the African leopard tortoise (Stigmochelys pardalis, former scientific name: Geochelone pardalis). The reasons for being so easily recognised are their attractive markings, appealing size (in some areas females may reach up to 70 cm!) and their distribution throughout Africa. 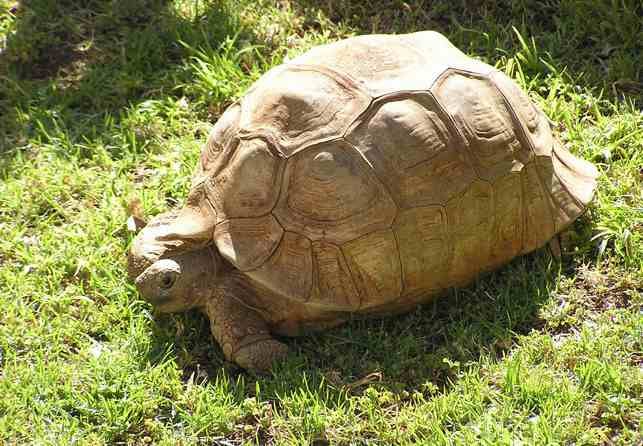 Leopard tortoises are found in an area stretching from southern Sudan and parts of Somalia across Kenya and Tanzania in East Africa and all over southern Africa. This versatile species occurs in Mozambique and South Africa as well as Zimbabwe, Botswana and Zambia, in the arid regions of Namibia as much as in the rain forests of Angola, no matter whether annual rainfall is just 100 mm or well above 2,000 mm.

The leopard tortoise favours semi-arid thorny to grassland habitats but seems to thrive anywhere from coastal to mountainous landscapes. It is able to cope with heat as well as extreme cold, aridity as well as humidity. Tortoises in the Mountain Zebra National Park near Cradock in South Africa are known to dwell in the abandoned holes of small predators during the cold winter months. Likewise, in the arid scenery around the Tiras Mountains in southern Namibia, they shelter in similar holes to survive the heat and extended periods of drought. There, however, the occurrence of leopard tortoises is no doubt proportionately much smaller than it is in the vast savannah of Serengeti National Park in East Africa, for example.

Leopard tortoises are herbivores which graze on grasses like lawnmowers. They also favour various fruits, succulents and thistles and even eat the dung of other herbivores. The key to success seems to be versatility combined with resilience.

Adaptability is also reflected in the reptiles’ size within different tortoise populations. The largest ones are found in areas where food is plentiful and, perhaps, where the reptiles have enough time to grow. In many African cultures large leopard tortoises are seen as a food source. For the San (Bushmen) in the Kalahari this tortoise used to be a special treat and the empty shells were treasured as containers for collecting berries and roots. But the numbers of tortoises always remained stable, even though baby tortoises have many natural enemies to contend with – hornbills, eagles, hawks and secretary birds. Bush fires are another threat. 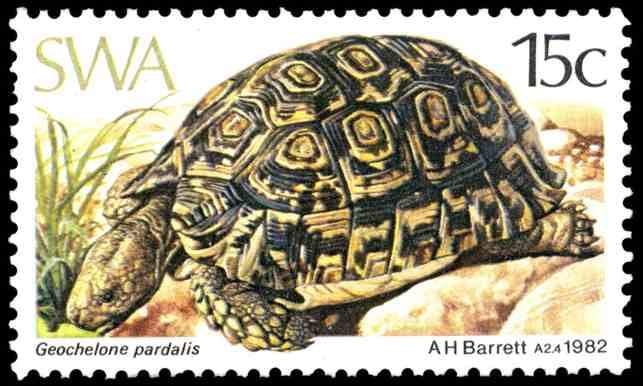 Leopard tortoises are very prolific. In years with generous rainfalls females lay up to three clutches of up to 12 (sometimes 20) eggs each, even in Namibia. Eggs are the size of a ping-pong ball. Females, as in all tortoise species, use the strong nails of their hind legs to dig a nesting hole of 30 to 35 cm deep. They moisten it by emptying their anal bladder and then, sliding down the hind leg, one egg after the other is dropped to its place in the hole. After the last one the nesting site is carefully covered up again and smoothed over with the plastron to make it less conspicuous.

Incubation time differs from 80 to 120 days in areas which are humid and always warm, to more than one year in mainly arid regions – like Namibia, for example. This is another form of amazing adaptability: if the rains stay away the hatchlings would find no grass and starve. It does in fact happen that fully developed baby tortoises hatch but stay in their nesting hole in a state of 'drought hibernation', waiting for the proverbial better times. After sufficient rain has fallen they will finally make their appearance. In typical tortoise manner the baby 'leopards' are immediately able to look after themselves without restriction and have all four little feet firmly planted on the ground.

In some parts of their original habitats leopard tortoises have nevertheless become rare. The reason will most certainly be the impact of the most destructive of all living creatures, modern man. Because even the most adaptable species are unable to cope with fast changes in their habitat. Perhaps we, as humans, should take a leaf out of that book.