Braving the early morning freeze that comes with the annual game count in Gondwana Cañon Park was all worth it again. As expected, numbers have increased after the exceptional rainy season this year. The count was conducted on 25 June

Especially two large herds of Oryx antelope, 180 and 140 animals respectively, caused an excited stir. They heralded promising results for the preliminary projections later on. According to projections the number of Oryx in Gondwana Cañon Park has risen from 600 (game count in June 2010) to 1,100. Springbok showed a similarly rapid growth, increasing from 3000 last year to 5000 this year. 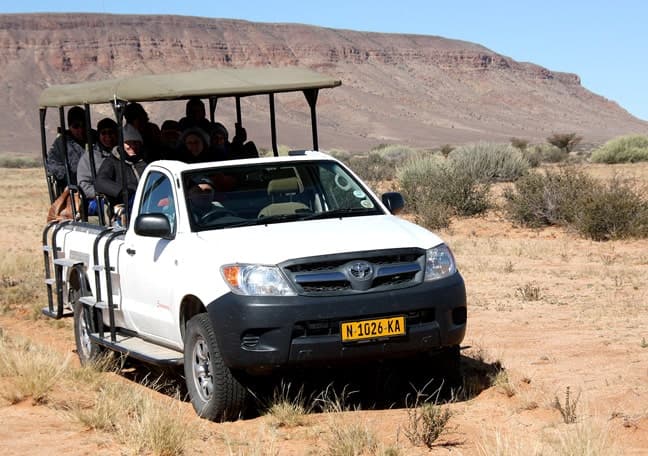 The number of Kudu caused amazement: it has risen to 890 (700 in 2010). Experts had in fact expected a decrease because after a good rainy season these antelope usually withdraw to rocky terrain where they are not so easy to spot.

Smaller numbers than last year were recorded for two species, but there is a feasible explanation. According to preliminary projections the number of mountain zebra has decreased from 470 last year to 360 this year. The reason is the natural migration of mountain zebra. After low rainfalls in neighbouring Ai Ais / Richtersveld Transfrontier Park during the 2009/2010 season large numbers of mountain zebra moved east – into Gondwana Cañon Park. This year’s abundant rainfalls prompted the animals to return to the Ai Ais / Richtersveld Transfrontier Park.

The preliminary results of the 2011 game count also show that there are 180 ostriches in Gondwana Cañon Park at present, compared to 600 last year. This decrease had to be expected due to the poor rainfalls in 2009/10. But lots of ostrich chicks, which hatched during the past rainy season, were spotted during the count this year. They are not included in the count, however, because the result would become distorted due to the high mortality rate of ostrich chicks.

More than 50 participants travelled to Gondwana Cañon Park for this year’s game count, led by park managers Trygve and Sue Cooper. They were supported by nature conservation experts Chris Brown and Jo Tagg as well as former park managers Rachel and Danie Brand.

The game count in Gondwana Cañon Park follows the same method every year so that results can be compared and trends can be established. It is the 'Fixed Route' method: counting is done on standard routes, from a vehicle, without binoculars, and apart from the number of animals their exact location and their distance from the route is recorded. Routes have been chosen in such a manner that the park’s different habitats are covered – such as sandy and gravel plains, river courses, rocky hilltops and inselbergs. 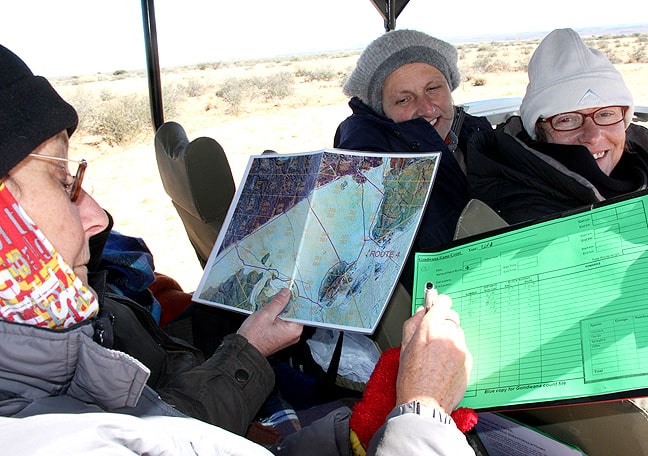 From the data collected the total number of each species is calculated by computer for the entire park. Since small animals (e.g. steenbok) are more difficult to spot than larger ones (e.g. oryx), these projections are computed with correction factors for each species. The total area of each habitat and the total length of the routes through each habitat are taken into consideration as well. In this way a population estimate for certain wildlife species is obtained even though the entire park is not covered by the count.

Gondwana Cañon Park covers an area of 126,000 ha (1,260 km²). Most of its borders with adjoining farmland in the north, east and south are fenced in – mainly to avoid conflicts over predators with neighbouring small-stock farmers. In the west, however, where it borders the Ai Ais / Richtersveld Transfrontier Park, the fence is open in many places. Rainfall is very low in the Nama Karoo Desert on the south-western fringe of the summer rain area: the annual average is about 80 mm and fluctuations from one year to the next are considerable. This means that availability of food resources for game changes accordingly. Sustainable management of the park therefore includes seeing to it that fauna and flora are in balance.

The return of jackals to Gondwana Cañon Park is a very good sign for a balanced ecosystem. Over the decades they had almost been wiped out by farmers but now their numbers are increasing quickly. According to this year’s projections there are 330 jackals in Gondwana Cañon Park. Park management regularly checks the jackal-proof fencing on the eastern boundary to the farms to ensure that our neighbours, who farm with sheep and goats, are not troubled by the increasing number of jackals.

Gondwana operates a scientifically sound game management programme in order to increase the diversity of species and restore nature’s original state as far as possible. Red hartebeest (2006), Burchell's zebra (2006) and blue wildebeest (2008) have been released in Gondwana Cañon Park. It has not been possible to record these species accurately during the past game count because of their low distribution so far. All of these species used to occur in this area; many of them were hunted to extinction or driven away by human activities during the past 200 years. 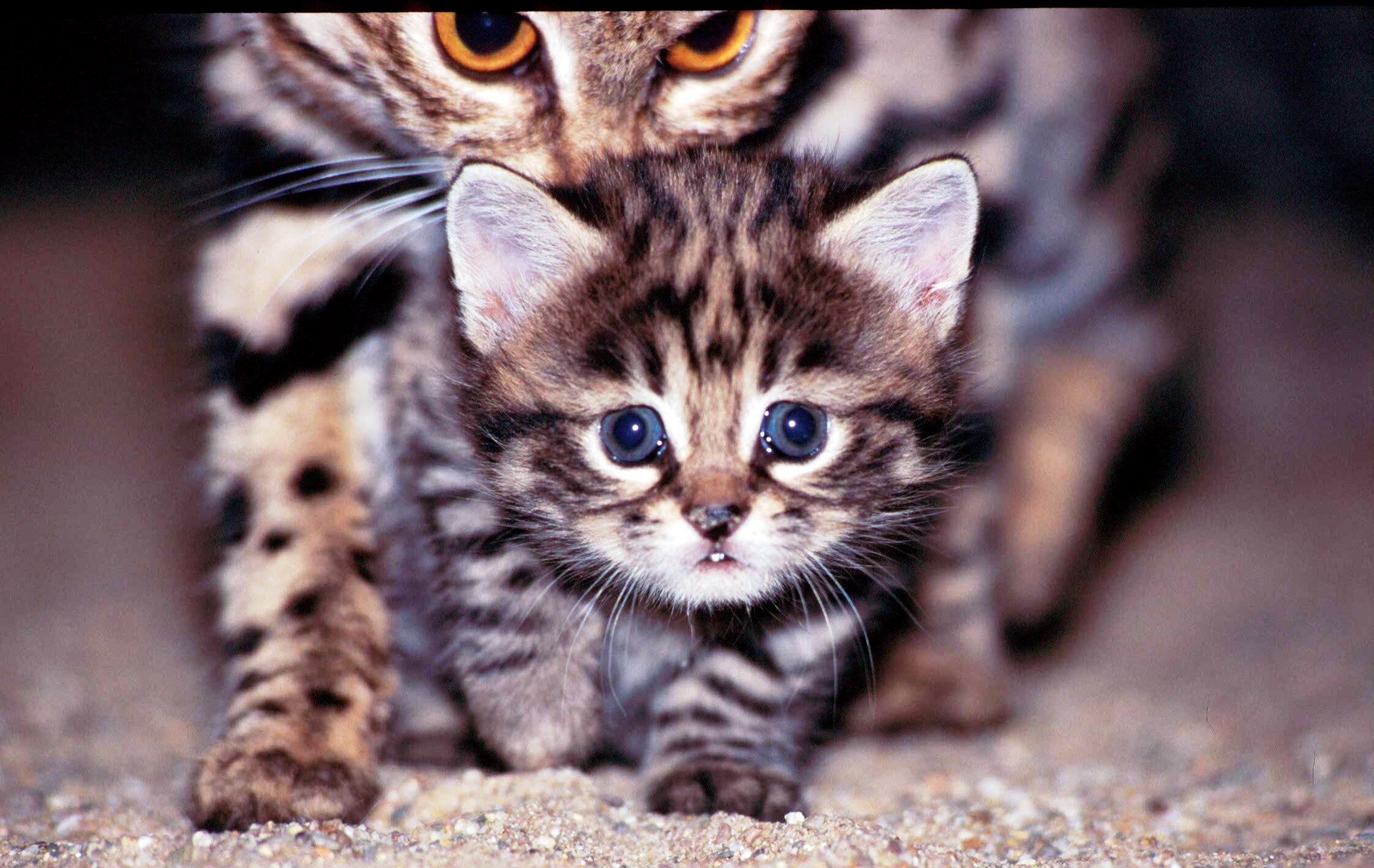 Did you know the Black-footed Cat in Namibia is threatened by extinction? 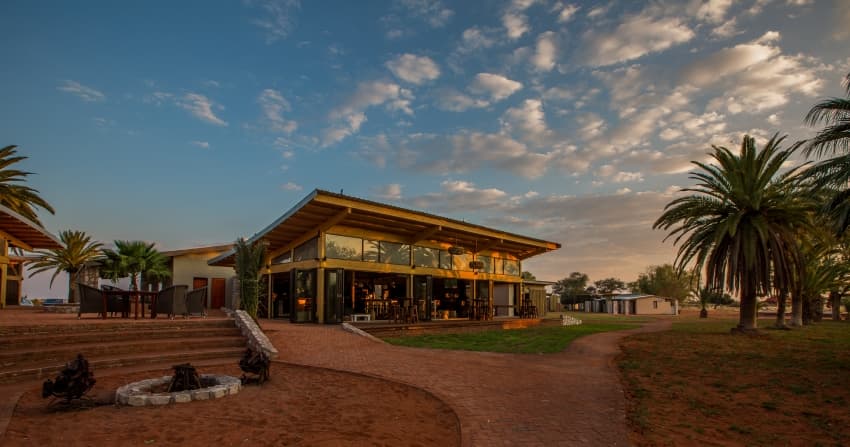 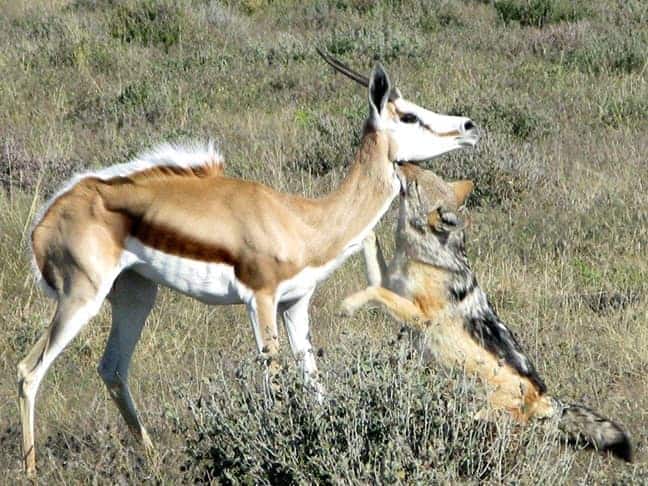 Why is the Jackal called a trickster?