At the start of this millennium Namibia caused worldwide headlines when biologists found a mysterious insect on Brandberg Mountain which did not fit into any known genus, family or order. In the end a whole new order had to be established - for the first time since 1914. Thus some scientists felt that the discovery of the 'gladiator' was as sensational as finding a life mastodon or sabre-toothed tiger.

The predatory insect was nicknamed 'gladiator' because parts of it are covered with spiky armouring reminiscent of the legendary warriors of ancient Rome. The name 'heelwalker' is also used by some because the insect always points the feet on its hind legs away from the ground and puts down the heels only.

Between 1.5 and 4 cm long, the gladiator has a size that made many scientists wonder why it took so long to notice this insect. It does, however, live rather inconspicuously: it is nocturnal and prefers to stay in the shelter provided by clumps of grass and rock crevices. Males are smaller than females and have to beat a hasty retreat after mating, otherwise they may get eaten.

The discovery of the gladiator insect turned into a piece of detective work: At the Max Planck Institute for Fresh Water Research in Plön, Germany, Ph.D. student Oliver Zompro is busy examining a fossil insect trapped in a drop of amber which is 45 million years old. He concludes that the insect cannot be classed with any of the known categories and turns to the Museum of Natural History in Berlin. There he comes across a specimen which appears to be related to his object of research and which had been collected in the German colony of South West Africa in 1909. Reason enough for the exciting assumption that an insect, which over the past 45 million years became extinct in Europe, had possibly survived in Africa.

Enquiring at the insect department of the National Museum in Namibia he learns that indeed they have a similar insect - in fact it was received only a few days earlier. Namibian biology student Martin Wittneben found it on an excursion to Brandberg Mountain in north-western Namibia. The tiny creature had come into his camp and he was unable to identify it. This was a very lucky coincidence, as Wittneben had of course taken down the GPS coordinates. 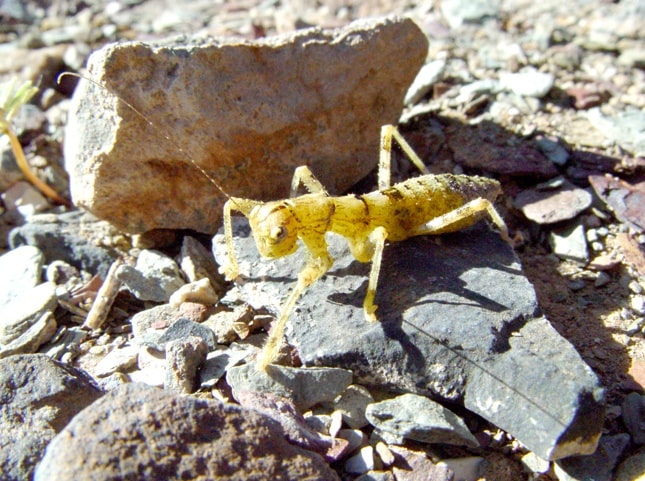 Zompro decided to travel to Namibia. In March 2002 he joined an expedition to the Brandberg, jointly sponsored by Conservation International, the Max Planck Institute and the National Museum of Namibia. The team consisted of 16 entomologists from Germany, Britain, South Africa, Namibia and the United States. The scientists were dropped onto Brandberg and began a painstaking search on the stony, arid summit. Zompro collected a dozen of the insects and carried them back to his lab in Germany to study mating, feeding and other forms of behaviour in the insects. Aggressive tendencies became one area of interest — a couple of the insects apparently were eaten during the trip back.

After in-depth research it can be stated without doubt that this insect does not belong to any known genus, family or order. The last time this happened was in 1914. And so another new order was added to the 30 known ones – the gladiator or Mantophasmatodea.

Since then some 20 gladiator species have been identified and divided into 10 genera and 3 to 4 families. These species have so far only been found in southern and east Africa - more precisely in Namibia, South Africa and Tanzania.

In Namibia, by the way, Brandberg is no longer the only site where gladiators have been found. The inconspicuous predatory insect also occurs at the Fish River Canyon. On an expedition arranged in 2006 by EduVentures, an initiative of the National Museum of Namibia, to the northern parts of Gondwana Cañon Park biologists and students unexpectedly discovered three gladiator specimens.