After an uncomfortable night being eaten alive by mosquitoes, I climbed out of my sardine-can of a car, stretched cramped legs, donned a fleece jacket and made my way to the quiver trees for sunrise. The sun was hiding behind a cloud but it peeped out to light up the corky trees in gold. 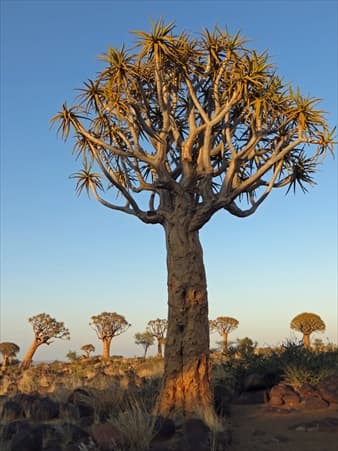 Making coffee was an ordeal in the wind but was eventually accomplished. It was then time to explore Keetmanshoop. Highlights were the museum, housed in the original church built in 1892 and supervised by missionary Fenchel, and the saying that I found in ‘Die Bak-oond’ restaurant: ‘Possible can be done immediately. We’re already working on the impossible, but please allow 48 hours for miracles.’

It took a while to do the things I wanted to in Keetmans and I had to remember to slow down to African time. When I stopped at the museum, no-one was there, the attendant had apparently gone to the municipality office. A worker told me to return in an hour. When I drove to Karas Huisen, the industry that makes charming soft toys in Tseiblaagte, it was closed. I discovered more Africanisms. The info centre was unable to offer any info but did give me a good map, vagrants seemed to have occupied the Eagle Monument and food-sellers sold their dishes next to the narrow fenced-off strip of land referred to as ‘Central Park’. I had a look at what was cooking. Tripe was on offer on the one side and two women, Marinda and Ronica, were cooking vleis en vetkoek on the other. “We live by faith,” they chorused. I could relate to that and bought a freshly cooked vetkoek for breakfast.

When I returned to the museum, it was open and I wandered through. It holds some colonial household items, rock specimens and fossils, information on the Nama traditions - including the laslap dresses worn by the women, and has intriguing information and photographs of the 1904-1908 War of Resistance. It also has a collection of pass tokens, a system which the Germans introduced in 1904 to control the movement of the local people. 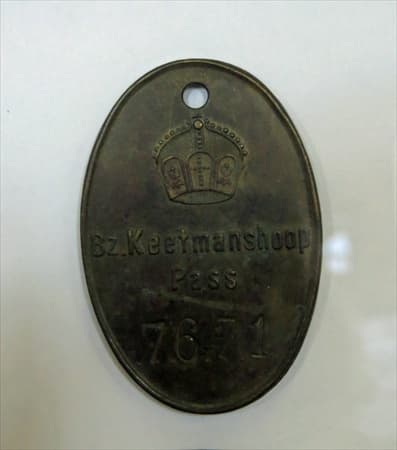 My last stop of the day was //Garas Park, a campsite and quiver tree forest 20km north of Keetmans. Here, campsite-minder Willem posed for photographs wearing his Kaiser Chiefs beanie, and owner Marian Hulme told me how she had taken over the place from her late father and continues their 20 year tradition of making the wacky figures that are dotted around the park.

The sun beat me to the Kalahari Anib Park, east of Mariental. As I drove into the lodge, springbok pronked and trotted off into the darkness and I disturbed a herd of hartebeest crossing the road. It was a good (&fitting) welcome to the Kalahari.

Ron Swilling is a freelance writer, based in Cape Town, writing for Namibian and South African publications. She is a regular contributor to Gondwana’s History and Stamps&Stories columns and documented the intriguing information of the Wild Horses in Namibia for Mannfred Goldbeck and Telané Greyling. She invites you to ‘Follow my footsteps’ on her journey from the Orange River, exploring the Gondwana routes through the intriguing country of Namibia.