The imposing ‘Finger of God’ remains a landmark in the memory of most Namibians, even though it tumbled to the ground more than twenty years ago . . . The 450-ton, 12-metre-high sandstone rock feature was difficult to ignore.

It rose above the arid landscape of Asab in southern Namibia, balanced precariously on a narrow shale pedestal only 1.5 metres wide, looking as if it was defying gravity. 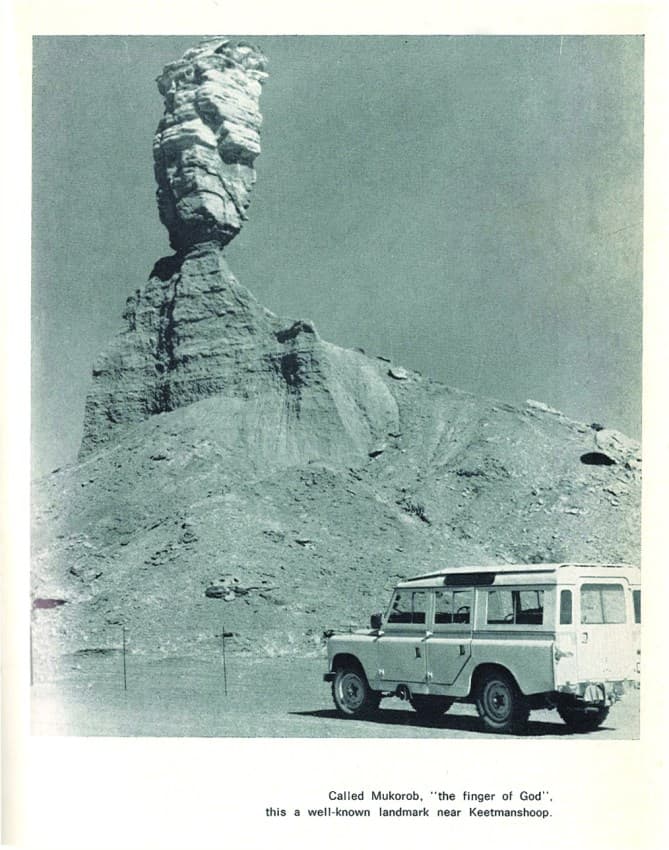 It didn’t escape the notice of two young climbers, who threw caution to the wind in 1973 to stand on the ‘fingertip of God’. 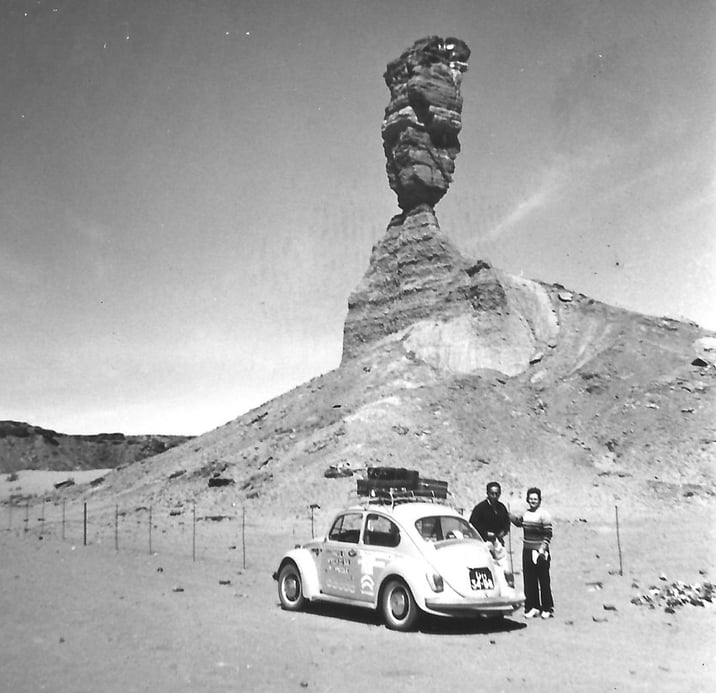 While studying in South Africa, the two Namibians from Windhoek joined the University of Cape Town’s Mountain Club. They had been introduced to mountain climbing as boy scouts. Rodney Lichtman was only 19 years old at the time and Patrick Evans 17, yet they were bursting with energy and zeal for life, and hungry for adventure. 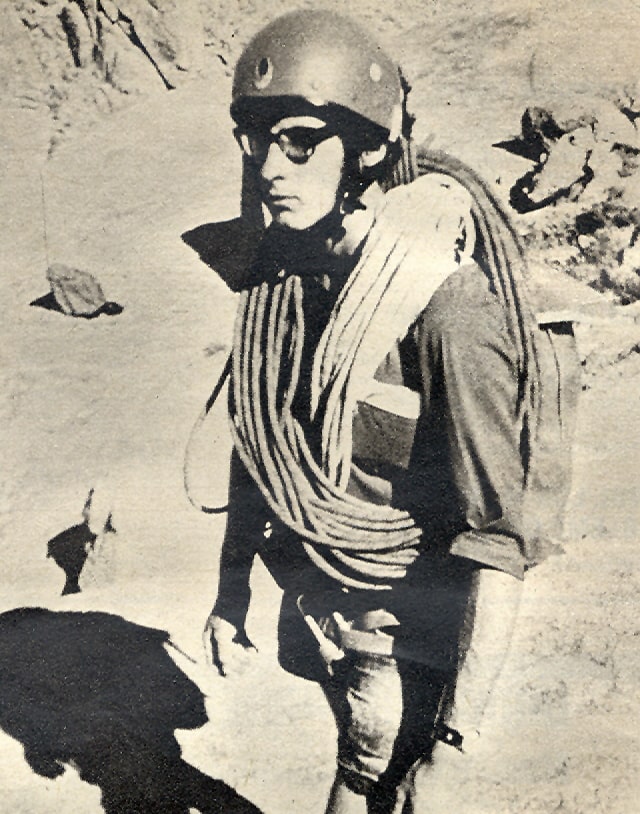 Rodney describes the sentiment of the time: “In those days competition in climbing involved opening new routes up a mountain or climbing the unclimbed.

The Finger of God was like an enticing finger beckoning to us.” The pair had no desire for glory or accolades. This was just between themselves and the rock.

They set off early one summer’s day to begin their ascent. The rest of the world disappeared as they turned their focus on the rock and the climb ahead of them, conscious of the fragility of the ancient rock structure. 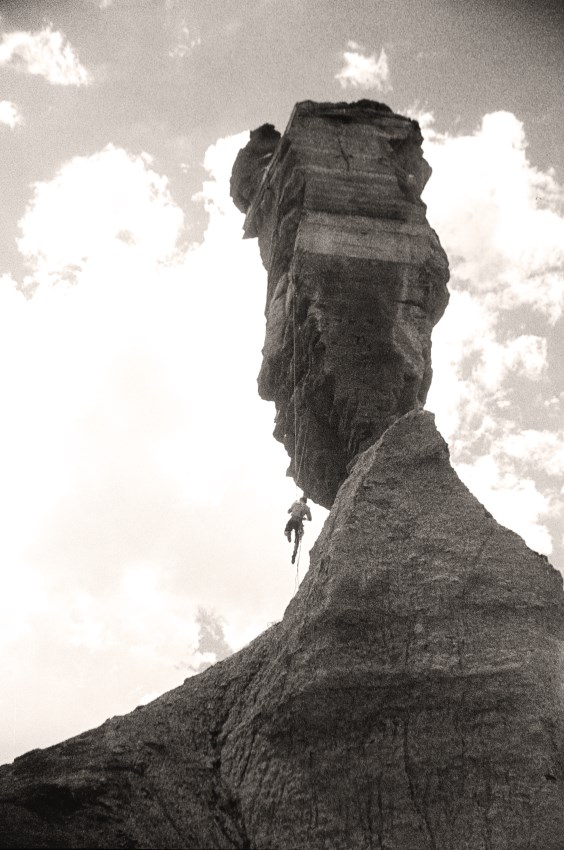 They honed-in on the smell and feel of the rock, the cracks and the foot- and hand-holds, concentrating on every decision, which needed to be precise. Their lives depended on it; there was no place for error.

Each took their turn as lead climber on the rock face. When one of them tired, they switched positions, letting the other tie in and take over the lead.

By late afternoon they had made it to the top to take deep gulps of air and appreciate a view of the gods. 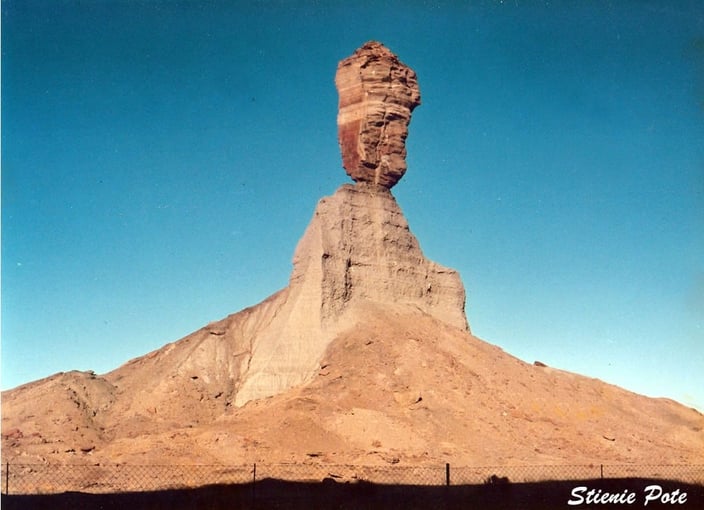 Tired, hot and weary, they climbed down carefully, stowed their ropes and made their way to the Asab Hotel to celebrate and quench their thirst. They told their tale to an incredulous barman. 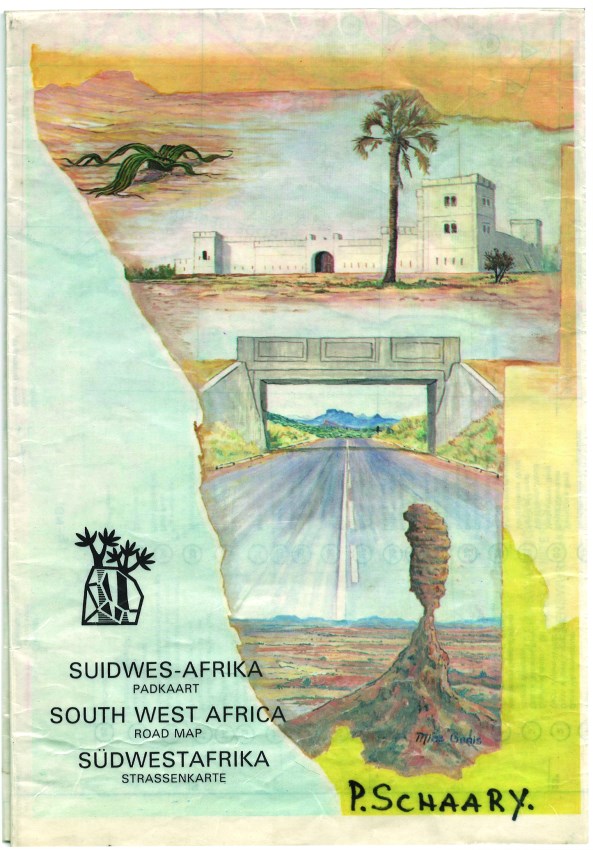 They also decided to recount the story of their dramatic feat to Huisgenoot magazine, who bought the story – and their mind-boggling photographs – paying the students enough to cover the cost of their holiday.

On their way back to Cape Town, they made a stop in Asab to drop off a copy of the printed article for the barman.

The Finger of God is also known as Mukorob, derived from its Nama name ‘Mûgorob’ meaning ‘someone saw’. Whether its unusual name stemmed from the Nama legend inspired by the rock pinnacle is anyone’s guess.

The legend, of which there are several variations, tells the story of how the Nama, who live in the arid southern reaches of Namibia, were visited by a large group of Herero from further north. 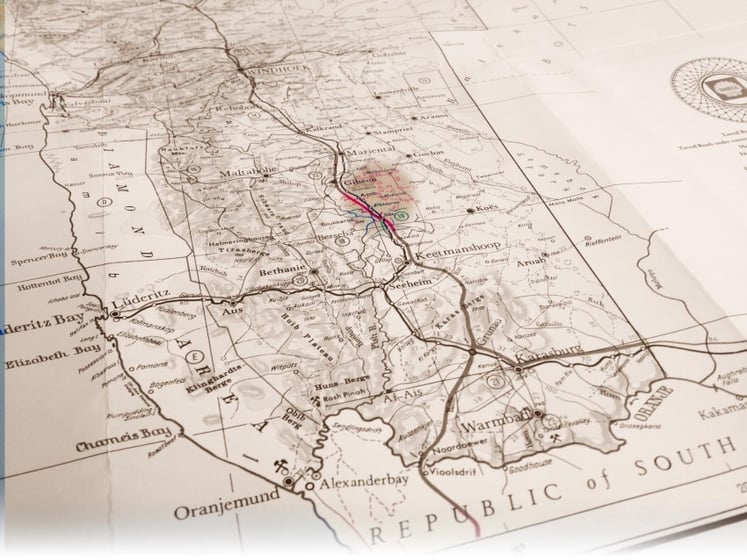 The Herero, always at loggerheads with the Nama, boasted how rich they were with their herds of fat cattle. “And what do you have?” they mocked. “Nothing but rocks!” The Nama quickly replied that they indeed had a very special rock and that they would be the lords of the country as long as it stood. 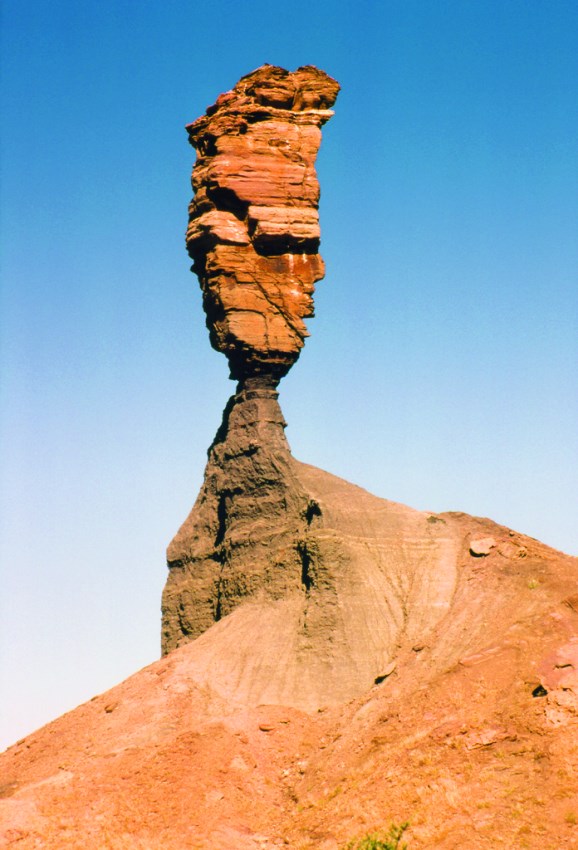 Annoyed, the Herero tied thongs together, wound the long rope around the rock and hitched it to their cattle, trying to topple it.

But, as hard as they tried, they were unable to budge the rock. “Mû kho ro!” the Nama
shouted – “There you see!” 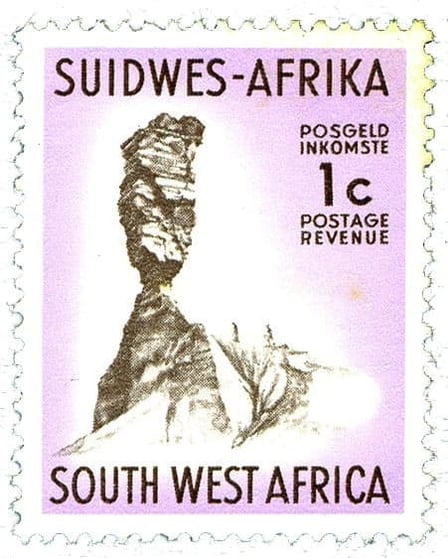 Although it was declared a national monument in 1955, Mukorob’s history began many years earlier at the end of the Gondwana ice age, 280 million years ago. As the glaciers began to melt, they formed lakes and swamps in which glacial debris and clay-sand sedimentation collected.

These deposits solidified over thousands of years when the lakes dried up forming the grey shale below and the more weather-resistant sandstone of the Weissrand Escarpment above. 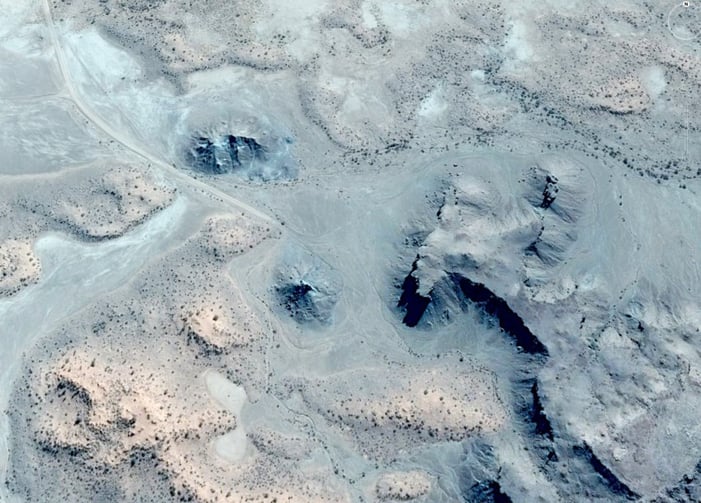 With the breaking up of Gondwana 120 million years ago into the southern hemisphere continents as we know them today, the continental edges were raised and slightly tilted to the east. The erosive power of the Fish River intensified in subsequent humid conditions, cutting a steep riverbank.

This was followed by widespread erosion causing the edge of the Weissrand to move further east over a period of millions of years. Impressive rock islands like Mukorob remained, towering into the sky as the escarpment eroded around them. 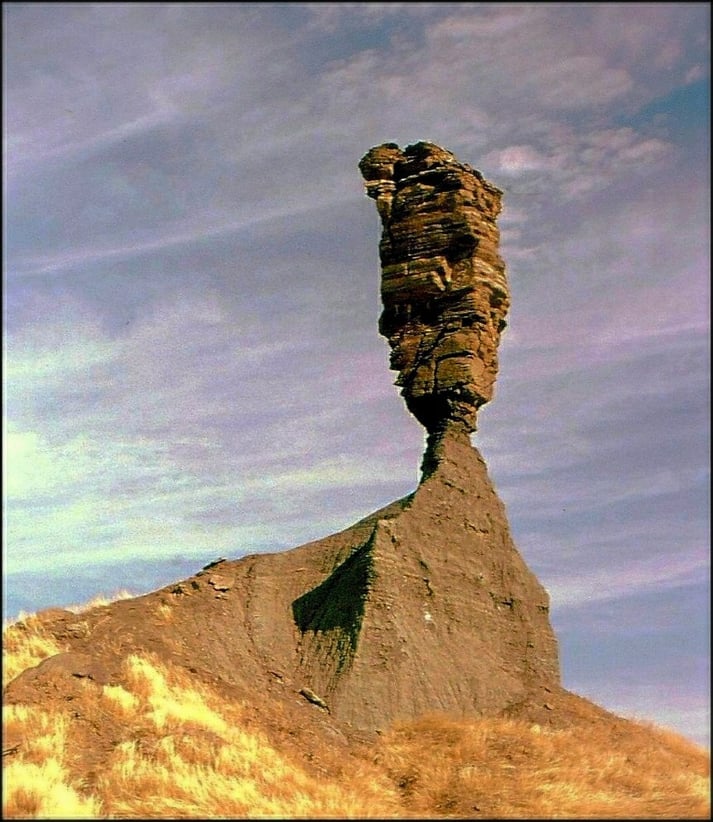 An awe-inspiring balancing act, the rock pinnacle towered over the land over the aeons, gradually weathered by the wind and rain at the slow pace of eternity.

Eventually, in December 1988, the last stones of the pedestal gave way and it tumbled down to the ground. There were no witnesses, only the vast landscape and deep blue sky. 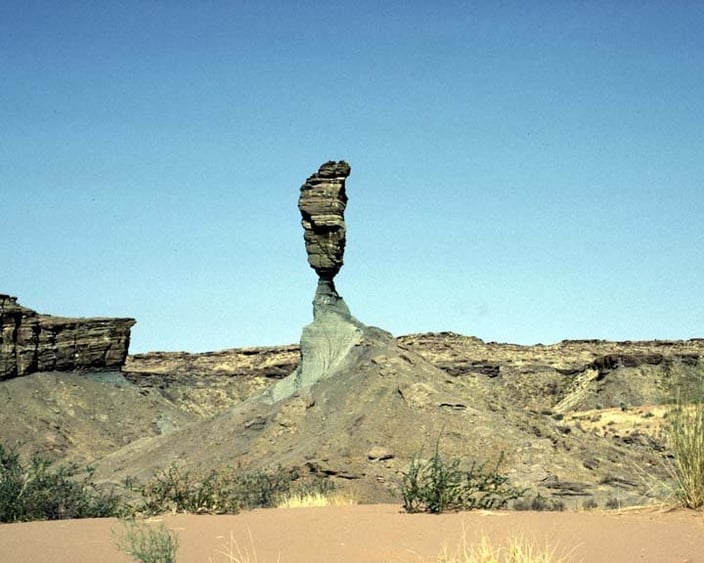 Since then, several stories surfaced, including one that the supremacy of the white man would end when this geological structure fell, and one from the extreme right that God was showing his disapproval.

The legends were, in all probability, embroidered as the country neared its independence in 1990. 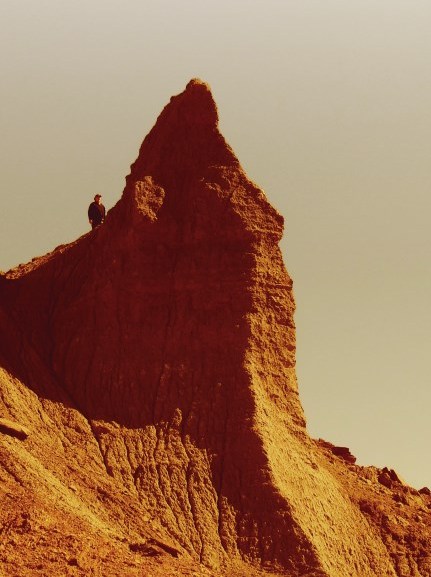 Geologists have determined that rather than giving any apocalyptic signs, Mukorob merely collapsed under its own weight after millions of years of erosion, a shudder from the Earth and a final rainstorm. 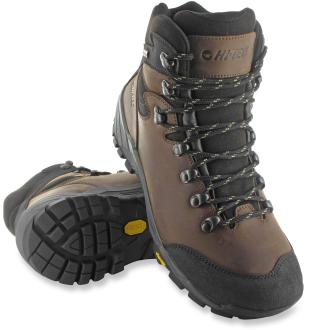 A Namibian hikers guide to packing 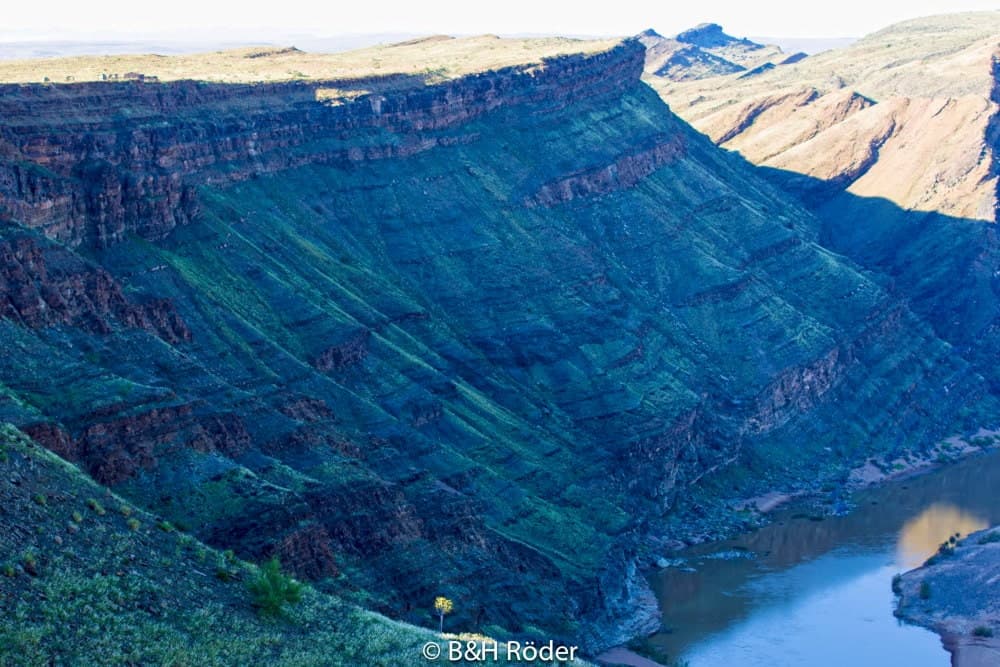