Although you may think that mini-bus taxis, buses and bakkies are the modern means of transport in an ever-expanding Africa, on the dusty roads of the Namibian interior, far from crowded cities and the hustle and bustle of the 21st century, it is also the donkey cart that is one of the quintessential Namibian forms of transport. 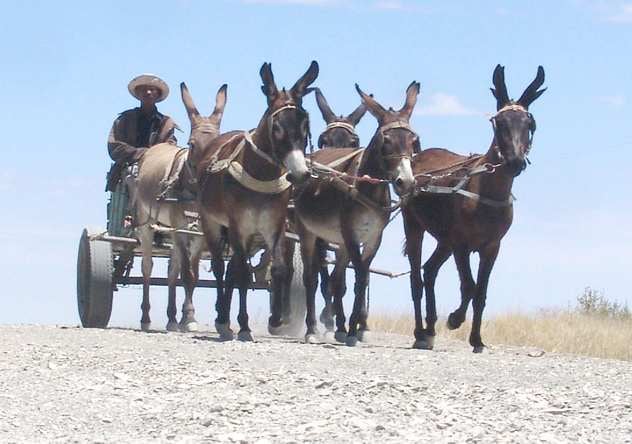 A donkey cart on a dusty Namibian gravel road.

The many gravel roads that bisect rural Namibia are arteries in the vast country, ideal for this transport of old that has survived the centuries, providing a vital form of affordable non-motorised transportation for local inhabitants and for carrying essentials such as firewood and water. Donkey carts convey people from village to village, to wells and clinics, and transport children to school. They are a common sight in the communal areas from southern to northern and eastern to western Namibia as they wind their way to their destinations at a pace appropriate for rural Africa. The two-wheeled '4x4s' of the Namibian countryside are often emblazoned with car names like 'Toyota', 'Ford', 'Opel' and even 'Mercedes Benz' and are led by teams of up to five donkeys. Humorous inscriptions such as 'Take me home', 'Lady man', 'Barjero – It’s a lifestyle' and 'The king of the road' are often also added. 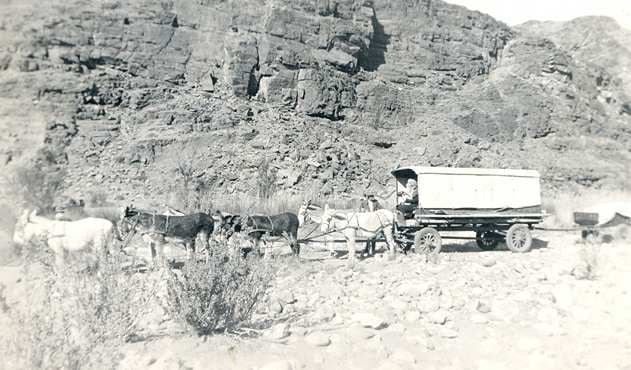 With these donkey carts poor Afrikaner farmers from South Africa trekked northwards over the Gariep (Orange) river in the 1920es in search for a better life.

The donkey descended from the African wild ass and was domesticated about five thousand years ago in Egypt or Mesopotamia. From there, it spread around the world to be used for transport and as a pack and draft animal. Donkeys, like horses, are not indigenous to southern Africa but were imported into South Africa at the time of the first Dutch settlers in the mid-1600s when the Cape of Good Hope became a re-provisioning station for the ships rounding the tip of Africa on their journeys to the East. The hardy Equids were introduced as pack and draft animals and to breed mules (a hybrid bred from a female horse and male donkey), which were more in demand for their superior strength, stronger hooves and surefootedness. The first shipment of mules and donkeys is reported to have arrived at the Cape in 1656. Donkeys were introduced into what is referred to as southern Namibia today in small numbers as settlers began to cross over the Orange/Gariep River from the latter part of the 18th century. Later on, towards the end of the 19th century, German settlers brought in donkeys to breed mules for use in the diamond fields and for military purposes. In the depression years following World War I, there was an influx of Afrikaner farmers travelling north from South Africa in two- or four-wheeled wooden donkey carts, replacing the ox-wagon as a means of transport. In later years as cars gained popularity, the majority of donkey carts were made using remnants of old cars. The carts were made using the 'bak' or rear part of the car, rear axles and tyres. From the 1920s until the 1950s donkey carts were the main form of transport on the farms. When the karakul market started to peak in the 1940s, many farmers were able to purchase their first cars. Donkey carts were passed on to the workers and made their way into the communal areas. By the mid-20th century the donkey cart had become a popular form of transport. Paulus is fetching his employer’s children from school with a donkey cart.

With the continual rise in petrol prices and the high cost of motor vehicles, people are depending more and more on donkey carts for transport. They have become part of the lifestyle and culture of rural Namibia. These valuable carts are the Chevrolets and Subarus of the countryside, often even proudly bearing number plates. The donkeys are also given amusing names. Originally custom-made, donkey carts are now innovative modes of transport constructed with recycled parts from the scrapyard. These include the tyres, and the donkey cart occupants may be required to wait while the donkey cart stops every few kilometres for the owner to jump out and pump the tyres. 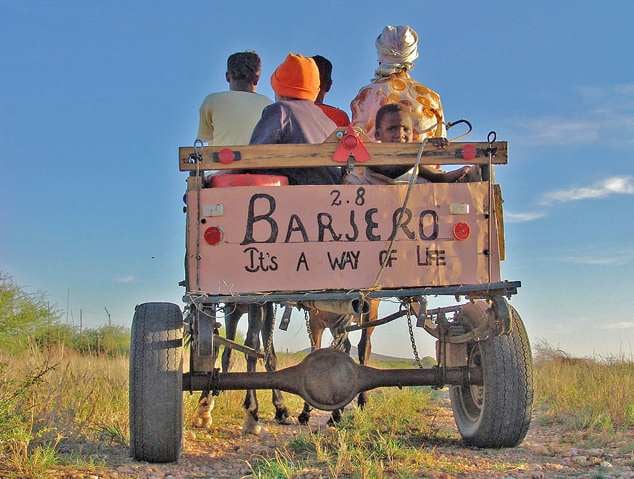 While the inhabitants of the north-central regions of Namibia have mostly used donkeys to plough their fields or to transport large water containers and the Himbas have used donkeys as pack animals, the Namas and Damaras of southern and western Namibia have wholeheartedly embraced the donkey cart culture.

An intriguing attraction for tourists, the donkey cart is part of the Namibian journey. You know you’re in Namibia when you see your first donkey cart hurtling along the auxiliary roads, disappearing between the long bleached grass into the distance or when you explore the hinterland. Just when you begin to think you are the only person for miles around, a donkey cart will appear on the horizon. These are the times to slow down, not to envelop its occupants in clouds of dust, wave and become acquainted with the colourful people of Namibia. Guaranteed they will be waving and smiling back, and will always have time for small talk.