To a newcomer, the Namib Desert may seem devoid of life, but several species of flora and fauna have adapted to survive in this unique ecosystem. Among them is the Brown Hyena, a rarely seen, secretive and solitary shaggy-haired desert animal. 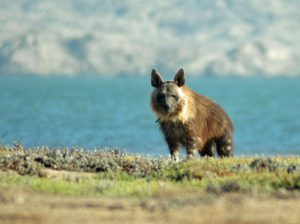 Only a fortunate few ever manage a glimpse of this largely nocturnal, stripe-legged hyena. Most only get to see its tracks etched into the sand in remote places along the Namibian coast and in the Namib Desert.

Unlike its more aggressive and larger Spotted Hyena cousin, the Brown Hyena, Hyaena brunnea or Parahyaena brunnea, prefers its own company and is predominantly a scavenger, eating carrion from animals that died a natural death or were killed by other predators, although it will also catch and eat small vertebrates and insects and predates on seal pups along the coast. It has not been recorded to attack human beings, does not have long-ranging vocalisations or pseudo-genitalia and the stronger sibling cub does not kill the other.

They are gentler creatures, at the bottom of the large carnivore hierarchy, that roam the desert, semi-desert, open-scrub, open woodland savannah and the desolate coastline. They wander through the more open areas at night when foraging but require some cover during the day. Able to survive independently of water, they obtain their fluids from their diet. Occurring in the southern African sub-region, Brown Hyenas are found in Angola, Botswana, Lesotho, Mozambique, Namibia, South Africa and Zimbabwe. In Namibia they are found throughout the country but are absent from the northern, north-eastern and south-eastern sections. 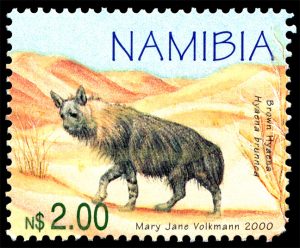 One of the rarest large carnivores, the Brown Hyena has, through lack of understanding, been unjustly poisoned and shot by farmers. It is listed on the IUCN Red List of Threatened Species as ‘Near Threatened’ as the global population size is less than 10 000 mature individuals. (The total population size is estimated at between 5000-8000 animals.) The population in Namibia is considered to be ‘Vulnerable’, likely to become ‘Endangered’ if the present declining population trend continues. There are only approximately 800-1200 Brown Hyenas in Namibia, with possibly as much as 50% of the population inhabiting the coastal areas of the Namib Desert.

Brown Hyenas have the strong muscular neck and shoulders and less developed hind legs typical of the Family Hyaenidae, although their fur coats mask their shape. They weigh between 35-45 kg, with the males being slightly heavier than the females, and are roughly the size of a German Shepherd.

While foraging for food, a Brown Hyena can travel up to 40 km in a single night. Home ranges vary from 250 km² in the Lüderitz area to 3500 km² in the interior. Although usually seen alone when out foraging, the Brown Hyena lives in family groups, usually comprising 6 adults. It joins its clan at a den where litters of 1 to 4 cubs (the average litter size is 3) are born and raised. All members of the clan bring back food to the den for the cubs and spend time playing and socialising. The cubs are weaned after 15 months. Two mating systems have been observed. In an area where there is a good food supply, immigrant males father the cubs and stay and provide for them. When food is more widely distributed, nomadic males father the cubs but don’t remain to participate in their rearing.

The Brown Hyena Research Project, initiated by Dr Ingrid Wiesel and based in Lüderitz, monitors populations of Brown Hyena in the Sperrgebiet National Park and the southern Namib-Naukluft Park where the Project is concentrated. Long-term studies have provided a wealth of much-needed information about the desert-dwellers that are so much a part of the Namib Desert.

Called Strandloper (the Afrikaans word for ‘beach-walker’) by the first settlers who noticed the shaggy animals eating carrion on the beaches, these gentle carnivores’ ability to live in desert extremes and their shy and secretive nature has ensured their survival.