Since 2019 Sinvula Michael Lukubwe, lecturer for wildlife management and ecotourism at the Katima Mulilo campus of the University of Namibia (UNAM), is researching oxpeckers in the Salambala Communal Conservancy. The area is in the east of the Zambezi Region at the border post Ngoma next to the Chobe River, with Botswana on the southern side of the river. 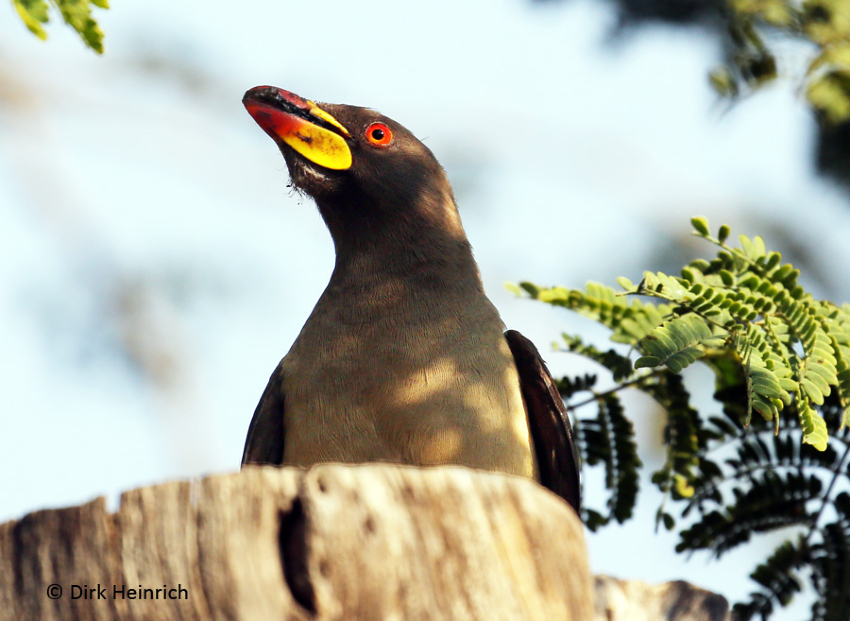 One of at least five adult Yellow-billed Oxpeckers that are looking after the chick in a hollow wooden pole at the boma at the Chobe River Camp on the bank of the Chobe River near Ngoma. Its beak is full of food. Photo: Dirk Heinrich

In May 2019 we helped Michael Lukubwe at the start of his research by capturing the first oxpeckers – 27 Red-billed and 10 Yellow-billed – at a cattle kraal at Izumba settlement, ringing and colour ringing them, taking various measurements and Lukubwe’s colleague, veterinarian Dr Simba Chinyoka, took blood samples of each bird for various tests.

This time Dr Chinyoka took blood samples of most of the birds. In 2019 we managed to obtain faeces samples of each bird which are used to find out which animals are the hosts of the oxpeckers. 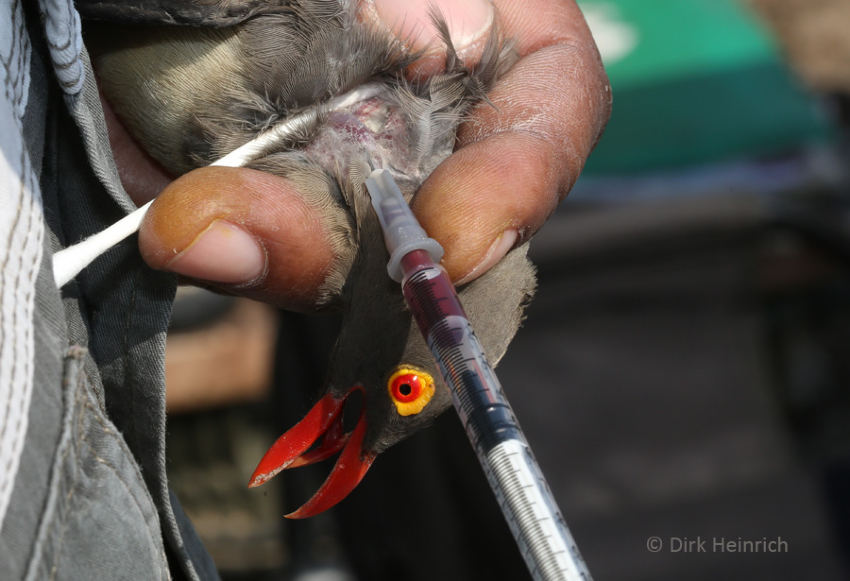 Dr Simba Chinyoka, a veterinarian, took blood of most of the birds for various tests to be done by different laboratories. The researcher wants to know if the birds have been in contact with poisons or have any parasites, determine the sex of each bird, perform DNA tests etc. Photo: Dirk Heinrich

Watching the feeding of the young

As in 2019 these oxpeckers bred in a hollow wooden pole of the "boma", a wind-sheltered terrace where dinner is served. Here guests can get within a few metres of the normally very shy birds and can watch them feeding their young.

On the 31st of August 2019 I discovered the nest hole for the first time and managed to ring two chicks. Reseacher Lukubwe then put up a camera trap at the boma with permission of Gondwana and to our surprise one of the birds caring for the chicks was one of the colour ringed birds from Izumba Village 15 km away.

Test results of the blood samples taken from the first birds that were captured revealed that no poisons were found - proof of healthy farming practices applied by the local farmers. They do not dip their cattle (arsenic-based dip kills ticks and oxpeckers), but rely on the oxpeckers to control the ticks on their animals. Ticks are the main food of oxpeckers. Both species also eat other ectoparasites, flying insects and blood from wounds. 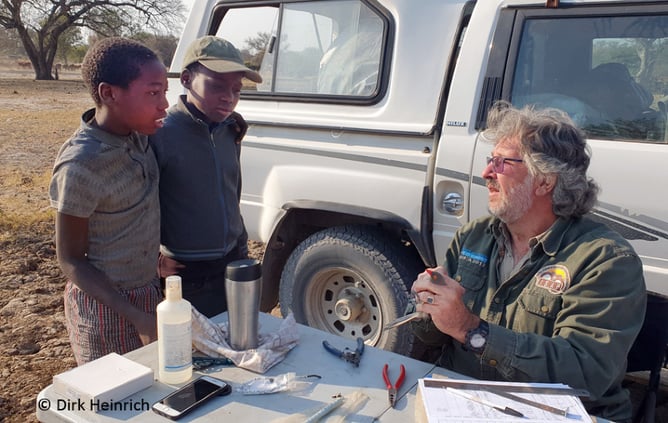 While ringing oxpeckers at Ioma Village, children came to have a look and we explained why the birds were captured, what will happen to them and answered more than one question. Adults too came to see and be informed of the project and bird ringing in general.

Oxpeckers apparently also on the move at night

With the help of trackers Lukubwe wants to find out where the oxpeckers spend the night and which areas they visit during the day. For this he has placed a receiver (node) at one of the houses of the Induna (headman) of Ioma Village and one at Chobe River Camp. In addition he drives around with a locator to try and find his birds. A few days after installing the receiver, Lukubwe recorded four birds coming to the village at 03h38! However, it still needs to be confirmed weather the devices were set to GMT (Greenwich Meridian Time). 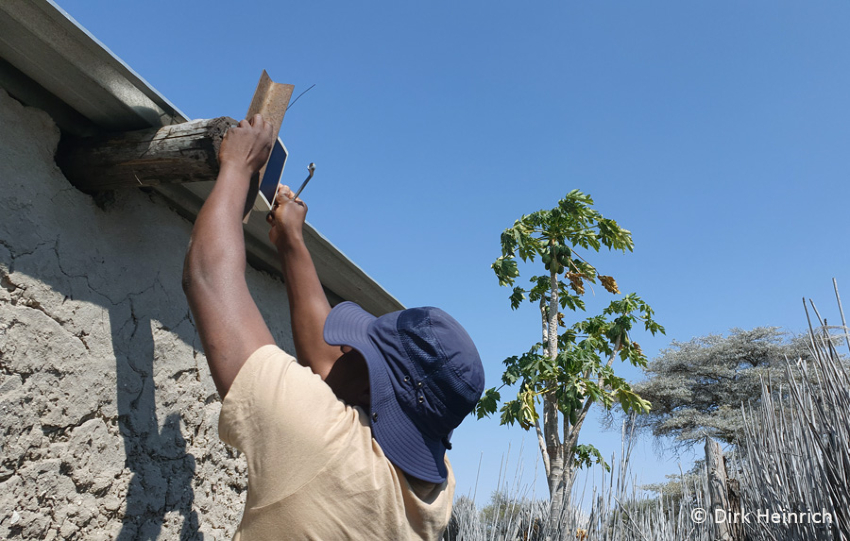 Researcher Sinvula Michael Lukubwe placing a receiver (node) at one of the houses of the Induna (headman) of Ioma Village.

As was the case in 2019, this year’s effort to ring oxpeckers for research purposes was supported by Gondwana Collection Namibia by sponsoring accommodation and meals for Mark Boorman and me.

While ringing birds at Ioma Village, children, herders, villagers and the headman came to look and inform themselves why these birds were captured and marked. We informed them about the value of ringing, reporting ringed birds, the value of birds in general and the conservation status of birds in Namibia. There was great interest and many questions had to be answered.

At Chobe River Camp, staff of Gondwana was present where possible to see how birds were ringed and trackers fitted, and learned about the project. Here too guides, reception staff, waiters and even a gardener had the chance to ask many questions and hear about the research project.