Amidst the red table-top mountains of Damaraland, a wealth of rock engravings are etched into the Etjo sandstone, powerful reminders of the hunter-gatherers of old who gathered near to the spring in the dry season and chiselled thousands of animals into the rock.

The Huab valley in northwestern Namibia, a place called /Uis-//aes - place among packed stones - by the San/Bushmen who inhabited the area, or Twyfelfontein - doubtful spring - by farmer David Levin in the late 1940s, contains these remnants of the past that endure in the hot, dry landscape under the clear blue Namibian sky, linking us to our forefathers and our ancient past.

Created through hundreds of millions of years of geological upheavals, the porous wind-laid or Aeolian rock eroded and fractured along natural fissures revealing flat smooth surfaces that provided ideal canvases for the ancient artists. 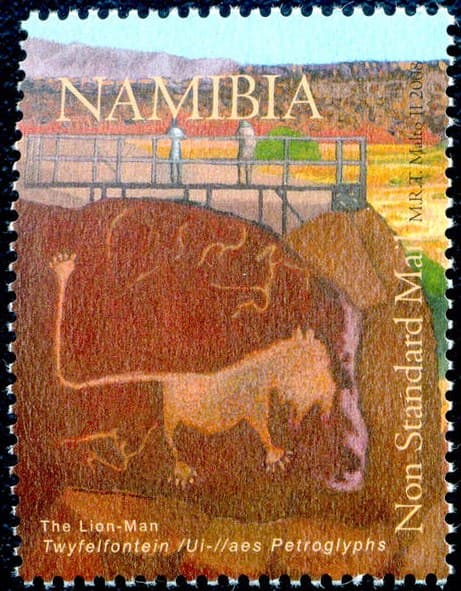 Namibia’s dry climate preserved these 'prayers to the gods' that are between 2,000 and 6,000 years old. Once thought to be merely educational in nature, maps of water points or a record of events, it has become apparent over the years that they have an important ritual and religious significance. The medicine man or shaman is believed to have entered a trance to communicate with the spiritual world to ask for food, healing, rain, luck for the hunt and protection for the people. The animals repeatedly engraved in the rock represent these entreaties to the gods that were of vital importance for people living off the land: the giraffe for rain, the ostrich for food, the zebra – luck for the hunt and the rhino, possibly for protection.

The shaman is thought to have chosen rock faces that not only served as suitable canvases but may have been portals into the other world. The act of engraving itself could have been a means of focusing energy to enter into trance. The animals are represented with elongated limbs or necks, as seen in the renditions of the giraffes, or like the well-known lion-man and dancing kudu, contain human elements or are half-human half animal, revealing the merging of the physical and spiritual worlds. 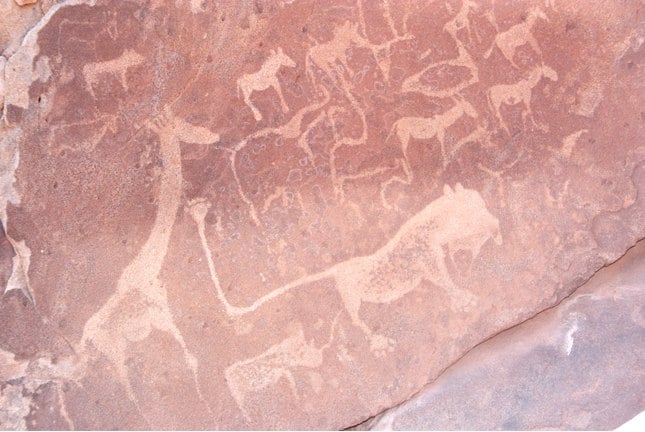 Unlike the newer Bushman/San paintings that mostly depict people involved in everyday events from dancing to hunting, the majority of the engravings focus on animals and were most probably executed by the San’s ancestors thousands of years earlier.

The Twyfelfontein engravings, recognised for their cultural importance, gained world heritage status in 2007, the Twyfelfontein area offering one of the greatest concentrations of rock art in southern Africa. In the valley, six hectares in size, over 2,000 engravings or petroglyphs have been identified. The dark patina of iron and manganese oxides referred to as 'desert varnish', allows us to determine the age of the engravings, the darker rock being the older work.

The rocky floor of the Twyfelfontein valley holds the older, more symbolic art - lines, holes and circles - while the animal engravings appear higher up, suggesting that the animals and spoor engravings took over the value of the lower symbolic engravings. A well-known rock slab revealing circles within circles - approximately 4,000 years old - looks remarkably like a representation of the solar system. 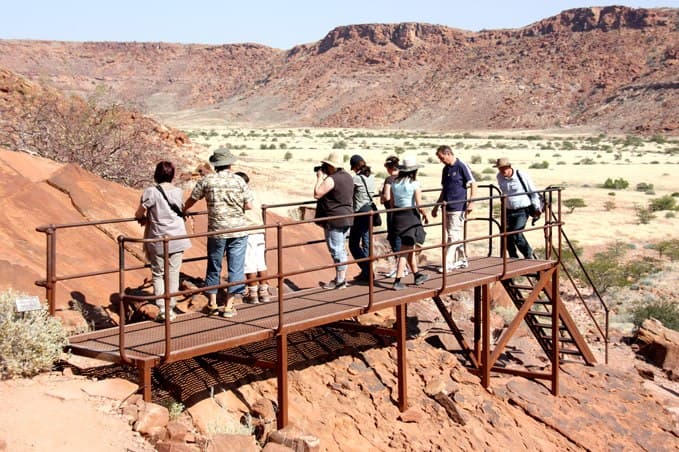 Walking through this harsh rocky world, the visitor’s perception shifts from art gallery to cathedral of prayer as he attempts to understand the nature of the work and the artists. Twyfelfontein continues to amaze and take us on a journey into the past as we imagine the herds of animals once attracted to its trickling spring and the people who passed through, leaving their engravings to bewilder and enrapture future generations.