The peculiar Tower of Tiras

The designer's and builder's name is Siegfried Schnebel. "This is a windmill which I designed and built myself", he explains in an interview in his house near Brakwater north of Windhoek. "There is an unusually strong supply of water there, just 30 m below the surface. I wanted to utilize it for irrigating orchards and fodder plants."

There is farm Neiseb which Siegfried Schnebel took over from his father, Wilhelm, in 1985. The fact that Neiseb has a lavish supply of water was already known during colonial times. "Wells for ox-wagon transports were sunk in this area in those days. The lower one of the two cisterns on my tower was part of the former drinking trough for the oxen. It is made of 5 mm steel plates." While his father owned the farm, 60 cubic metres of water could easily be pumped per hour without any noticeable effect on the water table. It seemed obvious that this abundance of water should be put to good use. Wilhelm Schnebel had already planted 400 citrus trees, 50 sultana vines, 700 prickly pears (ideal fodder) and a little lucerne. "Date palms also thrived like weeds", Siegfried Schnebel recalls. 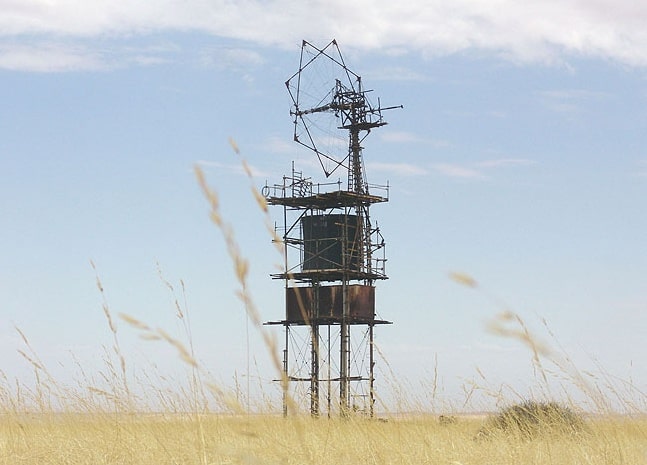 "The problem is that you need a powerful engine for pumping the water to the surface, and it wouldn't have been worth it to install smaller windmills at several smaller boreholes." The largest windmills on the market, however, weren't sturdy enough to hold out against the high winds in the area, he says. "So I came up with a construction of my own, specially designed for the requirements of my farm."

A large wheel was necessary for the high output of the pump. "But the larger the wheel the bigger the problems in very windy conditions", Siegfried Schnebel explains. A standard wheel with metal blades was not an option. Too rigid, says Schnebel. "All is well as long as there is just a light wind. But in order to cope with high winds one needs to be able to adjust the angle of the blades to the direction of the wind, to reduce the pressure on the tower." What is more, metal blades would have made the large wheel too heavy. "Therefore I used steel tubes for the wheel's rim and axle only; the spokes are made from light wire rope and canvas is attached to the rope. This reduced the wheel's weight to about 100 kg only, despite its diameter of 9.5 metres", Schnebel points out with a hint of pride in his voice. 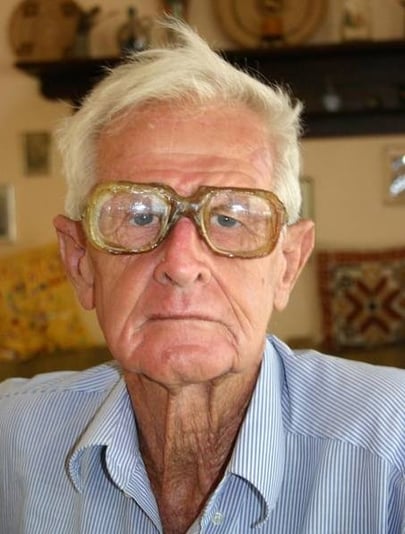 To make the sails equally suitable for strong and light wind they were arranged in two circles. In the inner circle their angle to the wind direction is 10 degrees, in the outer circle it is 45 degrees. Siegfried Schnebel explains: "Due to the higher leverage of the sails in the inner circle they push the wheel when the wind is blowing strongly, while the outer circle keeps it moving when the wind is light." The blades of customary windmills are set at a 10 degree angle, Schnebel says, and turn out of the wind when it becomes too strong. The unusually long axle of his construction also serves a purpose: joined to the rim at the top with wire rope, it maintains stability and prevents the sail-covered wheel from turning inside out like an umbrella in heavy gusts of wind.

As for the rest of the construction, stability is the most important criterion as well. "The foundation is 10 m square and 2 m deep, made of carefully packed stones and diagonal iron struts which support the vertical steel pillars", says Schnebel. "After all, the whole tower has a total weight of some 50 tons when both cisterns are full." According to his estimate the total height of his windmill is a little less than 25 m: "The wheel's axle is about 20 m above ground."

Costs were also an important consideration when building the windmill. "Since the farm didn't yield much I tried to get hold of construction material as cheaply as possible", Schnebel recalls. "I got most of it from my brother's scrapyard; Fritz ran a locksmith's workshop in Lüderitz and later in Windhoek." Building and constructing, by the way, was done without drawings or model calculations. "I simply experimented a bit, trial and error", Schnebel says. But the experimenting wasn't altogether by chance. Schnebel studied mathematics at the University of Stellenbosch and completed a Master of Science degree. He taught mathematics, physics and chemistry at the German School in Lüderitz for years.

In 1997 the work was almost complete. Only the irrigation system had to be installed. But at that point Siegfried Schnebel felt compelled to sell the farm. "It just didn't yield enough", he says. And so the giant windmill was never really in operation. He once got it going for the camera crew of NBC television. The documentary was aired in 2001.

Today the tower, citrus trees and prickly pears are all that remains of the plantation which was once envisaged at the foot of the Tiras Mountains on the fringe of the Namib. And a small café, closed down again since then, on the neighbouring farm on the opposite side of the road, overlooking the striking structure. Many a traveller stops and reaches for his camera. Small wonder. In the grassy plain the colossal contraption, welded together from pieces of scrap metal, looks like the futuristic work of an off-beat artist. Who knows, it might still turn into a tourist attraction one day - as the Peculiar Tower of Tiras.