The Jetty: Oyster Bar instead of Harbour Cranes

Swimming in the bay at the breakwater (Mole), standing on the jetty and marvelling at the sunset – that is as much part of a holiday in Swakopmund as salt belongs in the ocean. Imagine that both of these attractions are simply the result of a few quirks of history. It is quite likely that they would not exist if the bay of today’s Walvis Bay, 30 km further south, had not already been in British hands at the end of the 19th century and had Imperial Germany not declared the south-western part of Africa a protectorate and done its utmost to build a harbour for the country...

The breakwater and jetty are the remains of the first and third attempt to give Swakopmund a pier for mooring the ships - as alternative to the expensive deepwater harbour of Walvis Bay. Construction of the breakwater started on 2 September 1899. Three-and-a-half years later, in February 1903, the small harbour was ready. It was intended for smaller vessels which would ferry goods and passengers to and from the big steamers anchored in the roads. However, after just one year the breakwater basin had silted up to such an extent that even light boats could make it to the pier only at high tide. 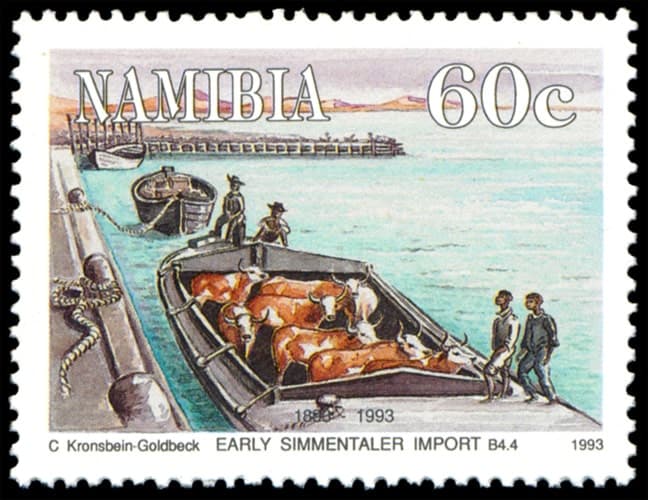 Thus a different approach was tried in 1904: A jetty with a length of 280 metres was built at a headland south of the breakwater, sporting three sets of tracks – one for cranes and two for railway wagons. Completed in April 1905, the jetty was used for unloading boats. Spruce timber had been the main building material – apparently untreated because at some stage it was noticed that the wood was eaten by woodworm.

Finally, in 1912, a real job was made of it and a new jetty was built from iron and concrete. It was supposed to become 640 m long, jutting out far enough into the sea to avoid the area where the heavy breakers form. The approach to the clearing area was planned to be 490 m long and 7.50 m wide, while the clearing area itself was going to be a platform of 150 m long and 20 m wide. The pylons, consisting of an iron core protected by a concrete case, were driven more than 2.5 m into the solid granite rock of the ocean floor. 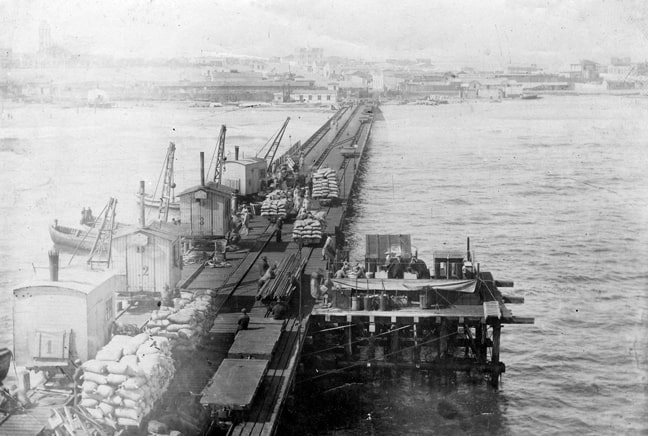 Construction work was very complex. The holes for the pylons were drilled with the help of divers and heavy machinery, then an iron pipe was sunk into it, followed by the iron abutment. Next the cavity was filled with small pieces of metal and concrete and finally the iron pipe was removed and used for making the next pylon. Construction work was delayed if the drilling equipment hit a layer of Nagelfluh (a concrete-like conglomerate of stones, sand, mud and lime) on top of the granite. Therefore only 260 m of the jetty had been completed by August 1914. The outbreak of the First World War put an end to further construction work and under the subsequent South African administration the deepwater port of Walvis Bay was used of course.

Since the iron jetty was built just a few metres south of the wooden predecessor not even the part that was ready was ever used for its original purpose, not even provisionally. As far as is known it happened only once that a ship moored at the jetty: almost choked with emotion, old Swakopmunders tell you that in 1952 the South African destroyer 'The Acteon' moored at the jetty. The whole town was astir and cheered the crew and invited them to the next bar for a roaring party. 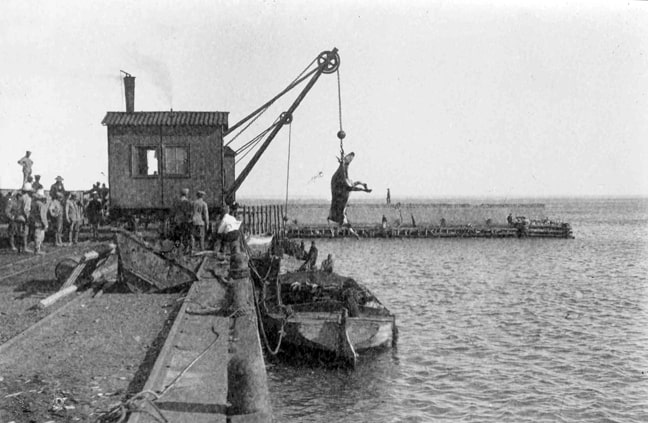 Otherwise the jetty served as a tourist attraction, a photo scene, a meeting place for dates, the start or finish of swimming competitions and also as the backdrop of a restaurant. In the late seventies the jetty was in danger of collapsing and was repaired provisionally. In the late nineties its further existence was at stake when serious damage was detected once more. After several years of public fundraising the City of Swakopmund finally made funds available for the thorough restoration of the jetty’s front part. The far end was eventually saved by businessman Quinton Liebenberg who had the platform repaired and in 2010 opened an oyster bar there.