Talk of snail mail! That’s putting it very mildly. Are the loved ones back home all right? Are mother and father still alive? Will the head office send the urgently needed bibles or won’t they? German missionaries in Namibia had to wait two years before they received an answer to the letters they sent to the home country. Every now and then they waited in vain. Around 1840 the mailing route was not only very long but also dangerous...

At that time, of course, postal services did not even exist. The missionaries sent their letters by runner or asked travellers to take them with. The first postal runner service in today’s Namibia was established in 1814 between the missionary stations of Bethanien and Warmbad. As more missionaries arrived and started to work in the central and northern parts of the country, they formed a loose network of   occasional runner services. These days it is hard to imagine the value that a letter from home had for them, the great joy that it brought... 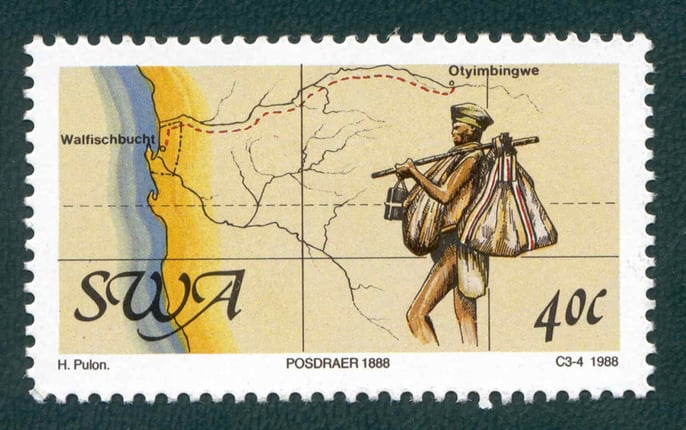 Letters to Germany had to be sent via Cape Town and the colonial power, Great Britain, because German ships had as yet no particular reason to call at the coast of South West Africa on a regular basis. Essentially there were two routes for sending mail to the Cape: by land through the south of the country and all the way to Cape Town, or the somewhat closer town of Port Nolloth, and the Baiweg (Bay Way) from the interior to Walvis Bay; ship traffic from Port Nolloth and Walvis Bay to Cape Town was erratic.

The surface route was the biggest challenge. Namibia’s first postmen were real heroes who certainly deserve to be honoured by means of a postage stamp. They covered hundreds of kilometres on foot, in the murderous heat of the summer and bitterly cold winters. They were able to take up to 17 kg of mail. The mailbag was tied to a stick which they carried on their shoulder; a bag with their provisions was attached to the other end of the stick. They took around 12 days to get from Windhoek to Walvis Bay. On foot they were faster and more reliable than saddle oxen or ox carts. Horses were not suitable in those early days because they often succumbed to horse sickness.

Apart from the exertion postal runners also had to withstand many dangers. One of the runners, who was the communication link between the mission stations of Bethanien, Warmbad and Kommagas (approx.50 km west of Springbok), disappeared one day. Tracks were found shortly afterwards which led to the assumption that he had fallen prey to a lion. One of his successors met with the same fate. In that case, however, neither the postal runner’s mortal remains nor the mail was found. People were also a threat. During the armed conflict between Nama and Herero sealed documents were viewed with suspicion by both warring parties, even though the missionaries did their best to remain neutral and mediate between the two. 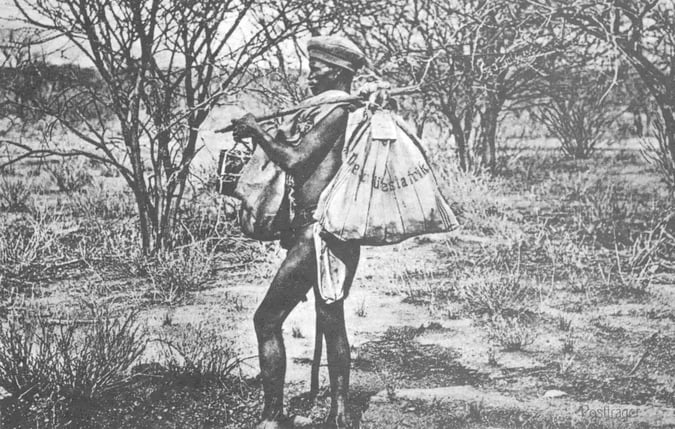 Due to the distances and dangers mailing was far more expensive that it is now. In addition to the postal charges from Cape Town to Germany via Britain, the wages for the runner as well as his provisions had to be paid – in British Pounds, then the valid currency at the Cape, and in kind.

Incidentally, the postage stamp as proof that the sender had paid the delivery costs was developed at about the same time when the missionaries were lamenting the fact that they had to wait for answers for two years. On 1 May 1840 the 'Penny Black' was issued in Britain, a printed piece of paper with an adhesive film on the reverse – the world’s first postage stamp. Sir Rowland Hill, a member of parliament who developed the concept for postal reform and submitted it to parliament, is seen as the inventor of the postage stamp.

The term 'stamp', however, refers to a method of prepayment which is 160 years older than the postage stamp. More than 330 years ago, in 1680, a merchant called William Dockwra and his partner Robert Murray established a postal service in London. A hand-stamp on the mail piece showed that it had been paid for.