OvaHimba - The Ekori-Headdress of the Women

In contrast to all other Namibian culture groups, the OvaHimba have retained their age-old prescribed sets of skin clothes, headdresses and ornaments due to their natural conservatism and geographic isolation until fairly recently. Traditionally, the OvaHimba are pastoralists and the majority still follows a semi-nomadic way of life. They are OtjiHerero-speaking and live in the arid northwestern parts of Namibia and in South Western Angola. Their social structure is characterized by the practice of double descent, which means that a person’s kinship ties are traced both matrilineally as well as patrilineally. 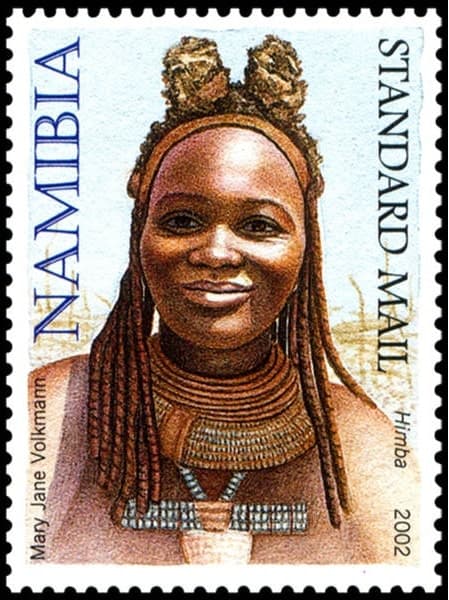 Upon marriage, a young woman will leave her parents’ homestead (onganda) and will move to that of her husband. Both, men and women wear various headdresses, of which each symbolizes a specific position within the community and a specific phase in life. Girls of pre-puberty age wear a variety of plaitlets, while slightly older girls wear loose-hanging strands, which are tied backwards after the initiation ceremony, thus denoting marriageable age. In the past, all newly married women wore the so-called ekori-headdress, which was worn until the first child was born or until a period of twelve to eighteen months had passed. However, already during the 1980s, the wearing of the ekori had become increasingly uncommon, possibly as a result of the effort involved to make it, and today it is seldom seen except during ceremonial occasions. The ekori is made of tanned sheep- or goatskin and has three leaf-shaped prongs, which resemble the ears of cattle.

The young woman, instructed by older women, makes the ekori herself. The upper section of the ekori is kept in its vertical position by reinforcing parts studded with iron beads. The structure of the ekori can vary considerably but the rolled-up veil in front and the three prongs are always retained. Women wearing the ekori, are subject to a large number of taboos, such as food restrictions and the observance of special rules of conduct in the husband’s onganda. After a woman has given birth to her first child or when the village head considers the taboo-period as over, he will invite her to participate in the meat tasting ceremony (makera) one day. Once she has participated in this ceremony, she is regarded a fully-fledged member of her husband’s patrilineage. Closely related to the makera-ceremony is another ceremony whereby her ekori is removed. One morning, while she is milking, the village head enters the cattle enclosure unobserved and tears the ekori off her head.

He hides it somewhere and the young woman, obviously much ashamed of being without a headdress, is given the erembe-headdress instead. In recent times, women generally wear a strip of brown cloth or leather during the period between the first and second child’s birth. It is attached above the forehead and its loose end points to the back. The erembe-headdress, which is made of the head skin of a sheep or goat, is worn throughout most of a woman’s life in everyday life. Even old women may wear the erembe, which indicates that they still play an active role in their communities. An essential part of women’s headdresses are the plaits, which are gradually lengthened. For this purpose they may even buy hair from other women.

Red ochre paste (otjize) is applied to all body parts, clothes and blankets. It is obtained from red ochre stones, which are found at a local mine and ground into a fine substance. The powder is mixed with fat and carried in ox horn containers (onya). During her later lifetime a woman wears the ekori-headdress only during times of bereavement or mourning, e.g. upon the death of her husband or during certain other ceremonies. If a woman passes away, her corpse is taken to the grave in full dress, including her ekori, which is only removed together with necklaces and clothing just before the funeral. Her ekori is handed back to her family as a visual sign of her death.