Attentively the bird with the strikingly large red bill and long tail watches the surroundings. His amazing eyelashes could make any woman envious. Nothing escapes his watchful dark eyes, not even the smallest of movements. Almost effortlessly the dove-sized bird hops a few branches further down. Next he has a black 15-centimetre millipede squirming in his bill and flies to a narrow vertical opening in the trunk of the tree. The slit is about six to seven centimetres high and one centimetre wide, narrowing at both ends. The hornbill passes his prey, still alive, through the opening where it is received by the tip of another bill. 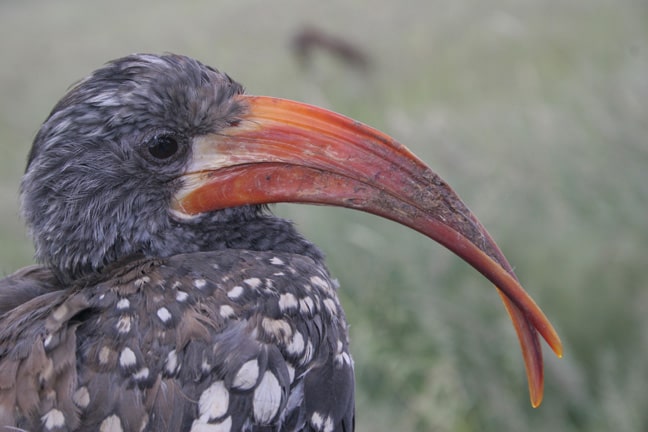 The hornbill’s companion sits in the nesting cavity. With faeces and mud she has sealed the opening, as is customary among the various types of hornbills. As soon as the sealing material turns hard the female is protected. Should a baboon stick his finger through the narrow slit, or should a snake attempt to squeeze in, the hornbill inside will inflict serious pain by pecking and snapping.

Monteiro’s hornbills enjoy a menu of various animal and plant meals. During the dry season they eat berries and small bulbs which they dig up with their long bills. When breeding, however, they prefer all kinds of insects – including their caterpillars and as large as saddle-backed bush crickets – as well as scorpions, sun spiders, eggs and chicks of other birds and even small mammals like mice. It may happen that the male bird brings a really nice fat treat which, alas, his gracious lady is unable to drag through the narrow slit. Then Mr Mouse will be seen dangling from the cavity, legs apart, as if hanged. Millipedes, by the way, are not eaten. They are squashed and chopped up by the female inside the cavity and spread around the nest.

Experts have wondered for a long time how it is possible that a bird can remain in its nesting cavity surrounded by its own faeces and later that of its chicks, too, without becoming ill. Hardly any bacteria or mould was found when nesting cavities were examined. The reason is that millipedes – if ‘handled’ roughly – secrete a liquid which is a concentrated antibiotic. The hornbills use it to disinfect their nest as well as themselves. How the birds know about this will probably remain a mystery to us humans. 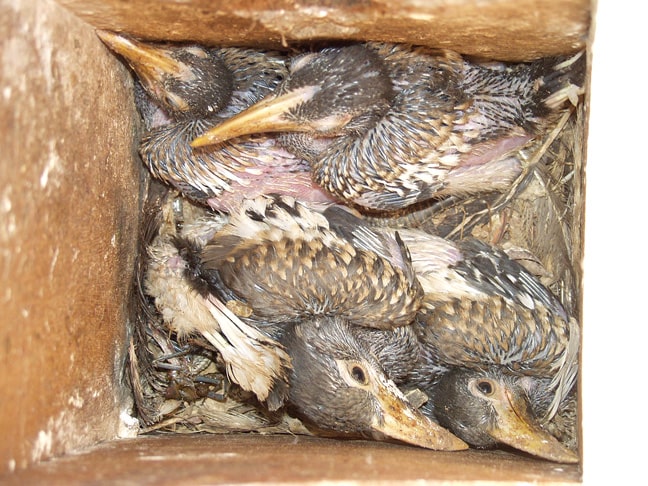 A few days after sealing the cavity the female lays the first egg. More eggs are laid in the course of several days. On average a clutch consists of four to six eggs, but clutches of up to eight eggs have been discovered in nesting boxes. Once a clutch even contained ten eggs, but only five chicks became fully fledged. Monteiro’s hornbill eggs are white.

Soon after laying the first eggs the female loses all her wing feathers and her long tail feathers – it is a complete moult of the most important feathers during the breeding period. This is unusual but makes sense because the female hornbill in the sealed cavity cannot fly away anyway and has no reason to take off either. By the time the feathers have grown back, the chicks are big enough to receive food through the slit themselves. The female then breaks out of her prison and the oldest and biggest chicks reseal the opening.

Since the eggs are laid over a period of two or more days the chicks also hatch at different times: in a nesting box - or the sealed cavity in a rock face or a tree - a chick with the first traces of plumage lies next to an egg or a tiny naked sibling which has just hatched. In another corner other chicks can be seen, smaller and more naked than the oldest but bigger than the youngest. If the male hornbill manages to bring enough food for the female and the offspring, all chicks will survive, or almost all. If insufficient quantities are passed through the narrow opening the youngest and weakest chick will die first. Since the nesting cavity is treated with millipede antibiotic chicks remain healthy otherwise. Dead chicks which the female cannot dispose of through the slit remain in the cavity flattened and mummified.

Monteiro’s hornbill (Tockus monteiri) is near-endemic to Namibia. This species is found in the central western and north-western parts of the country as well as in a small area in south-western Angola. It is named after Portuguese engineer and ornithologist Joachim Monteiro (1833–1878).