Mahangu - Manna of the north

Home to the Oshiwambo-speaking people, northern Namibia has its own distinctive character. Shebeens with wacky names line the streets, oshanas brim with water in the rainy season, and makalani palms blow in the breeze. The picture wouldn’t be complete without the homesteads bordered by palisades that form part of the rich visual tapestry and – importantly, fields of mahangu or omahangu as it’s called by locals. Daily life is shaped around what is transpiring in the fields at different times of the year, and the family’s meals revolve around the nutritious staple. 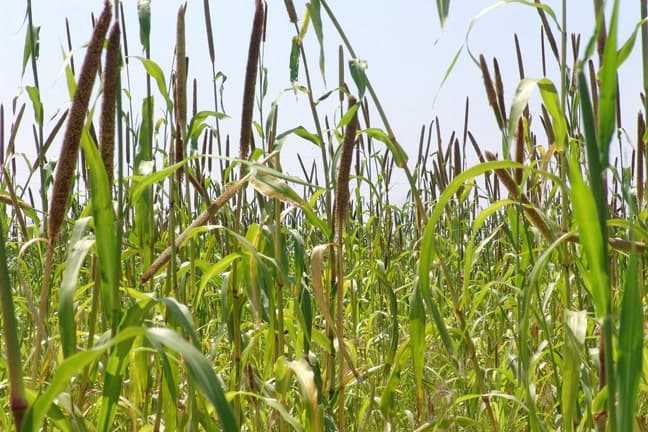 Mahangu - Pennisetum glaucum (or Pennisetum typhoides) – commonly known as pearl millet – is an ancient crop indigenous to Africa, known to have been cultivated in certain areas for the last 4000 years. It is thought to have originally been cultivated in the Sahel zone of West Africa from where it spread to east and southern Africa. Unlike exotic maize and wheat, pearl millet is a hardy local grain able to grow in areas of low soil fertility and high temperature, in soils with high salinity and low pH. The most widely grown of the millet varieties, it is cultivated in a vast area that includes West Africa, East Africa, Malawi, Angola, Namibia, Botswana and South Africa. It is also grown in India where it was introduced thousands of years ago. In Namibia, white maize and pearl millet are controlled crops, ensuring local consumption. Only a small percentage of mahangu is commercially marketed.

Pearl millet usually grows up to about two or three metres and has several culms that end in dense cylindrical spikes. The seeds are white-yellow to grey in colour, about four millimetres long and are pointed at one end, rounded on the other.

Cereals, belonging to the grass family – Poaceae, such as pearl millet, and Gramineae - have been around for aeons becoming staple diets of people worldwide and an integral part of human life. Sowing and reaping are cultural rituals that have been woven into the fabric of communal life. 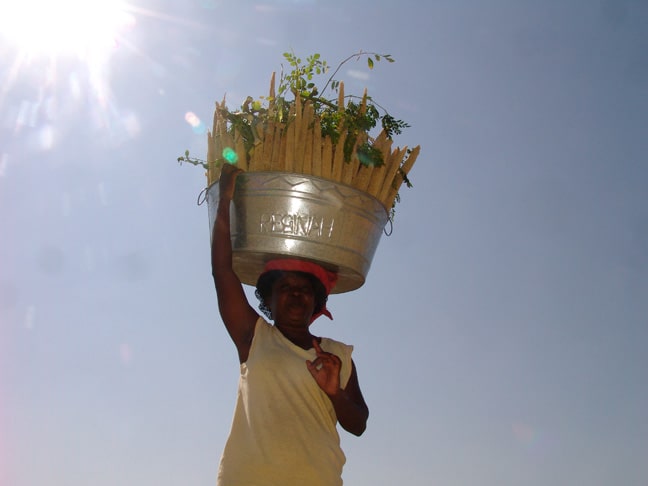 Mahangu seeds are planted on raised ground that has been tilled with a hoe and fertilised with dung and ash, preventing them being washed away in floods and serving to drain salt from the soil. Women tend to the harvest, usually breaking off the heads by hand (or with a knife, if still green), collecting them in baskets and taking them to the threshing floor to dry. When sufficiently dried, they are threshed with sticks or the thick end of pestles. The threshed grain is winnowed in flat baskets with a deft tilt of the hand to remove the chaff. It is then pounded in wooden mortars to make flour. These were once sunk into the ground, but free-standing mortars are now the more popular option. Traditionally, the floor of the pounding area was made from the clay of termite mounds, leaving the floor, and hence the flour, slightly gritty, and making it preferable to swallow the cooked porridge without much chewing. For storage, large grain baskets are used, called omaanda in the OshiKwanyama language (or eeshisha in OshiNdonga). The granary baskets are woven from mopane twine and lined with clay to protect the precious food-source from insects, rodents and moisture. They are placed on wooden poles and have grass roofs to protect the contents from rain.

The flour is used to make a stiff porridge, oshifima, undoubtedly the most important food in the north. It is eaten with a variety of dishes such as chicken, meat, wild spinach, beans, mopane worms or fish and is scooped up using the right hand. A popular fermented beverage, oshikundu (or ontaku), is also made from the mahangu flour. The stalks of the plants are used to feed cattle, thatch roofs and are even being used to make handmade omahangu paper.

A common sight of the rural north is that of two women beating a rhythm with their pestles as they pound mahangu and men sitting on the roadsides before the mid-year harvest weaving the large granary baskets. Mahangu’s ability to grow in conditions in which other less hardy grains are unable to survive makes it a more secure food crop for the unpredictable climate of the north – and a veritable manna from heaven.