This is their story, says Sue Huck manger at the Gondwana Canyon Park in Namibia.

“We have seen many around recently and we have found the first ever nests (2 of them) in the park in the last few weeks. We have had up to 30 Lappet Faced Vultures (LFV) drinking from the waterhole at the same time during the hot weather of the last couple of months. The Presence of Vultures is very encouraging for an eco-system, as they are 'Natures refuse collectors' cleaning up all the carcasses of dead animals. Unfortunately they are often poisoned by farmers and so having them here in such healthy numbers also indicates that poisons are not being used in the vicinity.

The vulture with the tag on, L144 was ringed on 14th October 2010 by Holger Kolberg at Mirabib in the Namib- Naukluft Park. We have also seen another vulture with a tag on this week but haven't managed to get close enough to read the tag yet. 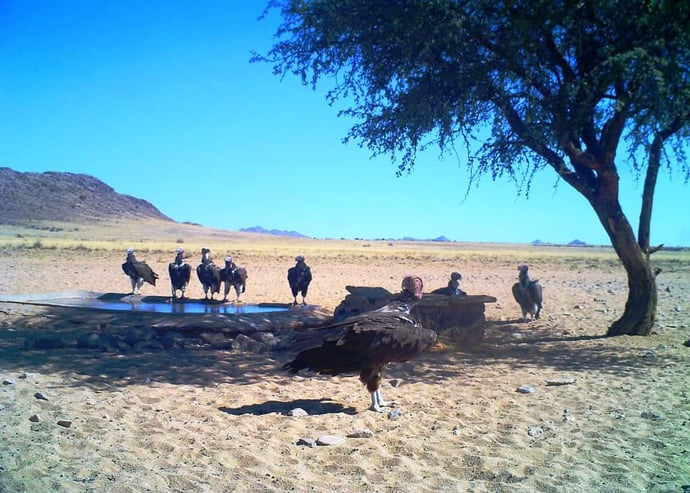 We have also observed African White Backed Vultures in the last week, 6 of them among the LFV's.”

The Gondwana Canyon Park with an area of 1,260 km² and the first piece of land acquired in 1995, this park is the largest and oldest nature reserve of the Gondwana Collection.

By now it is seen as ‘Little Etosha’: nowhere else in southern Namibia are animals found in similar numbers and diversity: species which once used to roam the area are finally back again - like springbok, Oryx antelope, hartebeest, blue wildebeest, ostrich, plains and mountain zebra, kudu and klipspringer.

Explore Gondwana Canyon Park on a hiking trip or a scenic drive. And visit our Canyon Information Centre at the Canyon Roadhouse.