How does one know that the Namib is the oldest desert on earth? And that the ostrich originates in Namibia? The answer to both questions is the same and it is revealed by the fossilised dunes of the Namib, or rather, UNDERNEATH the Namib Desert. Largely covered by the sand sea of the ‘young’ Namib, the ancient sandstone layers become visible only here and there. One of the most beautiful sites - apart from the Tsondab Canyon close to Solitaire, which is closed to the public – is found in Gondwana Namib Park, some 30 km south of Solitaire. There the russet sandstone, known as Tsondab sandstone, has been exposed and cut into by an ancient river. Guests of Namib Desert Lodge spend the night right at the foot of the fossilised dunes or at the camping site with views of the dunes-turned-into-stone.

These former dunes were already there about 20 million years ago. The sand compacted into sandstone during more humid phases 16 to 8 million years ago. But desert conditions prevailed in many parts of today’s Namib even during ‘humid’ periods. That is the reason why experts regard the Namib as the oldest desert on earth. 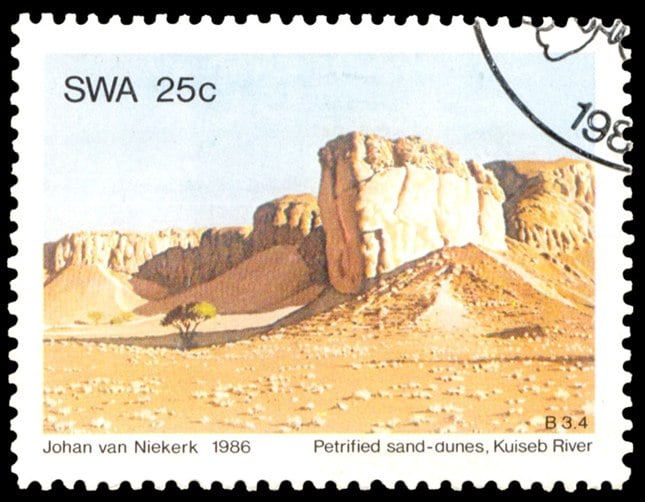 The stretch of sand sea which is 80 km wide and now extends from Walvis Bay to Lüderitz was formed much later. The sand, by the way, is erosional debris from the Drakensberg Mountains. It was washed into the Atlantic Ocean by the Gariep/Orange River and deposited on the sea floor and along the western coastline. Constant south-westerly winds carried the sand into the interior and over millions of years swept it into huge fields of sand and dunes.

The fossilised dunes answer the question about the origin of the ostrich only when you take the time to stroll about and scrutinize the ground. You will find that here the Tsondab sandstone is extremely rich in plant and animal fossils. Roots have left their traces, for example, and tunnels of ants, termites, beetles and spiders are discernible. Even spider webs have been preserved – a rarity! A word of warning: collecting of fossils is strictly prohibited.

Furthermore, the fossil remains of rodents and reptiles were found, as well as those of animals which remotely resemble aardvark (anteater), giraffe or elephant. Based on these finds scientists were able to piece together a rather comprehensive picture of the landscape of that time – it did not look much different from today. 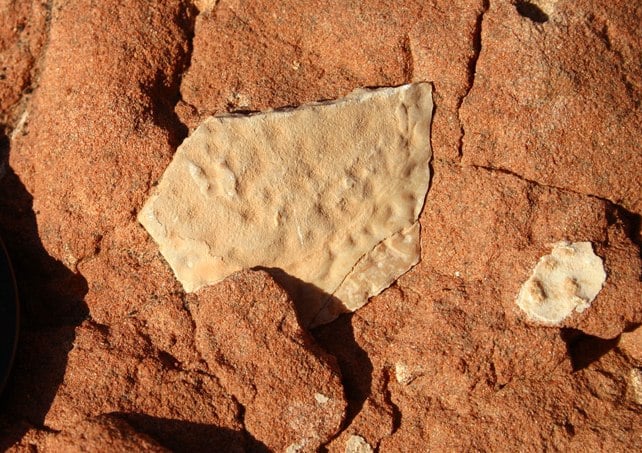 The most intriguing fossils contained in Tsondab Sandstone are fragments of large eggshells. They look similar to ostrich eggs, as we know them, and there are several variations which differ in thickness and in the pore structure on the outside. This suggests that there were different types of ostrich-like birds. Since similar shells are always present in other layers of similar age as well, the different types cannot have existed alongside one another at the same time. Instead, a sequence of different species becomes apparent.

The oldest shells are from eggs which were laid about 16 million years ago. Their initial thickness of 4 mm decreased over the ages; today’s shells are 2.5 to 3 mm. The primeval eggs were also much larger – they weighed over 2 kg and had a volume of up to 1.7 litres. The equivalent today is about 1.5 kg and 1 litre. In Gondwana Namib Park some fossil shells have been discovered which do not seem to resemble any of the types known so far. They now have to be examined by experts.

The layers of Tsondab Sandstone thus contain the phylogenetic tree of today’s Ostrich. On the basis of the eggshells its line can be traced back to an early ancestor that existed 16 million years ago. It may have resembled a giant bird which occurred on the island of Madagascar at that time. Therefore it is plausible that the Ostrich originates in Africa and spread to Eurasia only at a later stage.

The fascinating story about the origin of the ostrich can be learnt from the book 'Passage through Time - The Fossils of Namibia', written by geologist Gabi Schneider and beautifully illustrated with drawings by artist Christine Marais.