I had one more destination on this journey, Owambo, the Owamboland of old, where traditional homesteads, shebeens, oshanas (ponds), makalani palms, mahangu fields and shebeen after shebeen, characterise the landscape, and where groups are still ruled by kings. The attractive Etosha Safari Lodge, outside Anderson Gate and overlooking an expanse of mopane woodland, was my overnight stop en-route. A bonus to the beauty is Etosha Camp’s Okambashu restaurant. Now this is a foot-stamping, warm and vibey venue if there ever was one. 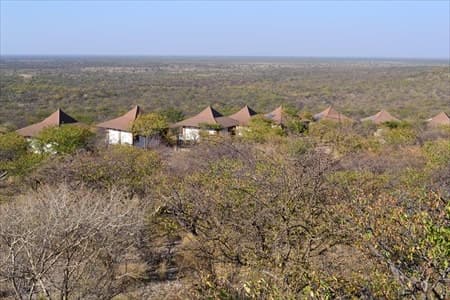 Shebeens were once illegal or informal bars where people met to catch up on news. In the town in pre-independence days they often had a political agenda. Today, they are legal and are dotted throughout the country, often also selling basic groceries and in some areas, simple dishes. The Okambashu restaurant at Etosha Safari Camp (and Lodge guests are welcome to dine there) uses the shebeen theme to provide colour and character to the restaurant setting. Baskets, signage, posters and shebeen bric-a-brac bring humour to the wacky restaurant setting, another innovative idea from the Gondwana Collection.

The restaurant also provided a perfect introduction to the north-central regions or Owambo where we were headed next, where shebeens with names like Down Corruption Bar, New Flower, Havana and Morning Star line the main roads. It’s a short hop and skip from Etosha – via King Nehale Gate – to Owambo, which provides an alternate route to north-western Namibia (&all the main roads are tarred!) or to the Kavango and Caprivi. Home to more than half the Namibian population, it is an area that is not on the tourist route (as yet) and is mostly unexplored by travellers. Yet, it is interesting and different from anything in the rest of Namibia and has a character entirely of its own. Growing towns like Ondangwa and Oshakati are surrounded by rural areas, and people still live as they did many years ago, dependent on their mahangu crops, their cattle or goats, and fish from the oshanas.

A low-lying area, Owambo is part of the Cuvelai Basin, and its floodplains are fed by water from Angola, which filters down, eventually filling up the Etosha Pan. This year, although at the time of our visit the mahangu fields were already swathes of dry, bleached stalks and the oshanas were fast drying up, people were still fishing in the mud for catfish using their woven funnelled-shaped traps.

Drought and floods are well-known to the people here and life continued as always with smiles, laughter and friendship, something we discovered chatting to people alongside the road, at the meat market and outside the shebeens.

Overnighting in Ondangwa, we decided to spend the next day driving off the main route in search of the mysterious Lake Oponona. But, that’s a story for another day.