Bartholomeu Dias - Watery grave at the Cape of Storms

Defying gale-force winds and the spray of the thundering surf, the stone cross firmly stands on a rocky promontory which juts some 50 metres into the Atlantic Ocean southwest of Lüderitz. It is a monument to Bartholomeu Dias, the Portuguese seafarer who was the first European to sail around the southern tip of Africa and thereby pioneered the way to opening up the sea route to India.

Lisbon in August 1487. With two caravels and a supply vessel 37-year-old Bartholomeu Dias sets sail for a top-secret expedition. King John II of Portugal has instructed him to sail down the West African coast and find out whether the continent ends somewhere in the south and whether it is possible to sail around it and continue to the east - more specifically, to India.

Portugal, the naval power, has been searching for the sea route to the east for decades. Its quest is not driven by mere curiosity or an urge for discovery but by economic motives. Spices from India are much sought after in Europe, but they are outrageously expensive. The spice trade is in the hands of Indian, Persian, Arab, Turkish and Venetian merchants, and the Osman Empire is imposing high customs duties. If it were possible to sail to India, the monopoly of the merchants along the overland spice route would be broken.

In 1481 Dias had taken part in an expedition to the coast of Guinea. Now his task is to continue where fellow countryman Diego Cão left off in 1486. Cão had sailed as far south as present-day Namibia and erected a stone cross at Cape Cross north of Swakopmund. Dias with his three ships pushes on beyond that point, to Walvis Bay, where he anchors the supply ship and continues to the bay of Lüderitz. He names it Angra Pequeña (the little bay) and puts up a padrão, a stone pillar with Portugal’s coat of arms. 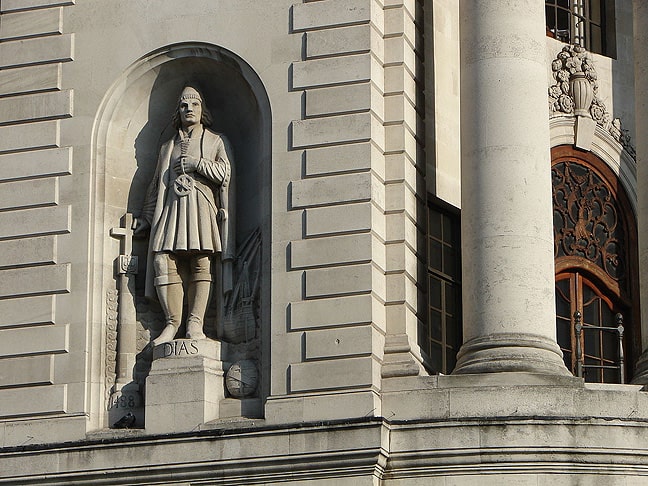 On the next stage of the journey the two caravels were swept off far to the south by storms. The coastline disappeared from sight. Dias turned east. When day after day passed without land coming into view Dias changed to a northerly course and indeed returned to the African coast. He replenished his water supplies in present-day Mossel Bay and continued further east. On 12 March 1488 he erected another stone pillar at Cape Padrone, east of what was to become Port Elizabeth. At the mouth of the Great Fish River, where the coast clearly points into a north-easterly direction, Dias is finally certain that he has sailed around the tip of Africa: this is the sea route to India!

But the crews of both ships have been suffering from scurvy for weeks and mutiny is in the air. With a heavy heart Dias turns back. Thus it is not him but his successor Vasco da Gama who goes down in history as the explorer who discovered the sea route to India.

On the return journey Dias discovered the cape which King John renamed the Cape of Good Hope because of the high expectations he had for the sea route to India. Dias had called it cabo tormentoso, the Cape of Storms – in a strange premonition, perhaps, that it would ultimately be his undoing. On 1 May 1488 he erected his last padrão near Cape Point on the Indian Ocean side of the peninsula. He arrived back in Lisbon at the end of that year, more than 16 months after he set sail for his expedition.

After his successful return King John II appointed him the highest administrator of the royal trade and tax authority. It remains a mystery why John’s successor, King Manuel I, chose Vasco da Gama instead of Bartholomeu Dias to lead the first expedition to India in 1497. Dias commanded four ships of a fleet of 13 which sailed southwest across the Atlantic in 1500 and took possession of Brazil. Re-crossing the Atlantic further south, four ships were lost in a storm. On 29 May 1500 Dias and his crew found their watery grave near his Cape of Storms.