What a pleasure! For the first time in three years, the more than 100 managers of Gondwana Collection Namibia were able to meet for a workshop to exchange personal experiences and get up to date.

The management meeting took place from 8 to 10 June 2022 at Damara Mopane Lodge and was excellently organised by the People Team (Human Resources Department) as the 'Flourish Forum'. A name that not only expresses Gondwana's joy at the resurgence of tourism, but also appeals to the motivation of every single member of the Gondwana family to make the touristic high season from July to October a success. 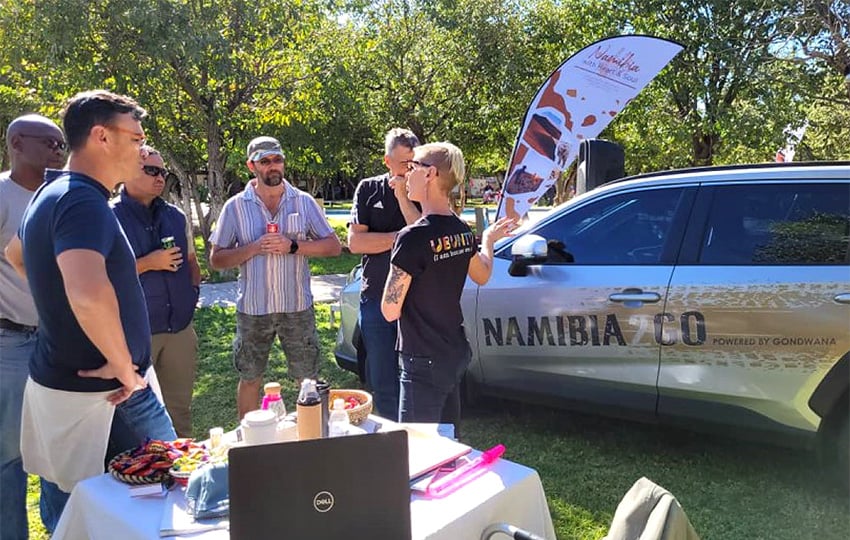 Optimistic about the future

Gondwana Collection Namibia did not lay off a single employee during the difficult years of the Corona pandemic. Although there were some resignations in the face of reduced salaries, the tourism company and its Gondwana family are well prepared to resume full operations.

Training and educational programmes continued to take place over the past two years, and new products such as Etosha King Nehale and the Go2 Traveller Transfers were introduced during this time. 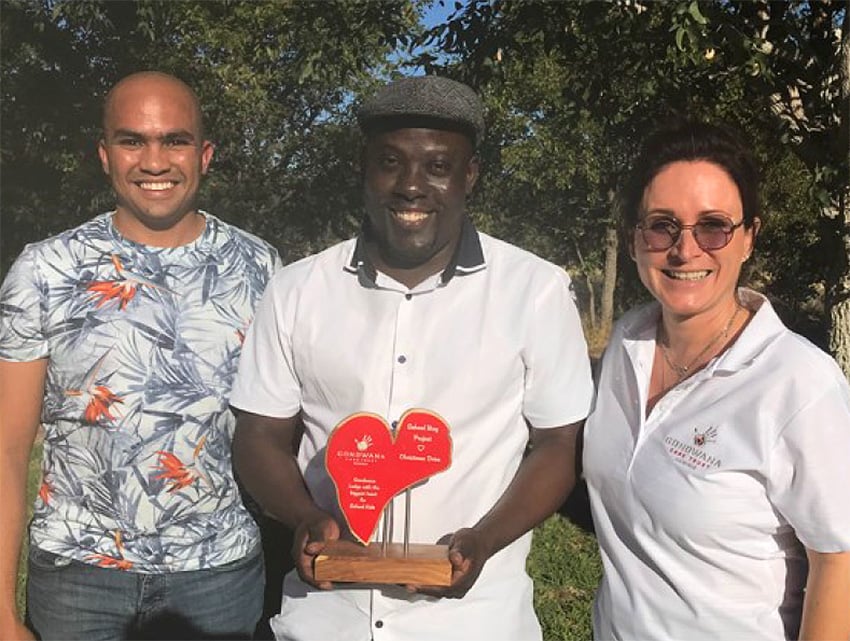 The manager of Chobe River Camp, Mathias Ndana (centre) received a very special award from Quintin Hartung (left) and Dgini Visser of the Gondwana Care Trust. In 2021, his lodge team attracted the most sponsors for the Back to School Christmas project.

The Gondwana Care Trust continued to fulfil its social responsibilities, serving 8000 meals a day to those in need in 2021 through the MealForTwo project. The Back-to-School Christmas Bag project, which provides underprivileged children with reusable bags filled with stationery and cosmetics for the coming school, also continued.

Although 17 lodges of Gondwana Collection Namibia have already been awarded the highest seal of approval by Eco Awards Namibia, Gondwana presented internal awards at the 'Flourish Forum' and acknowledged lodges that have particularly distinguished themselves with new ideas and projects in terms of environmental protection and social commitment. 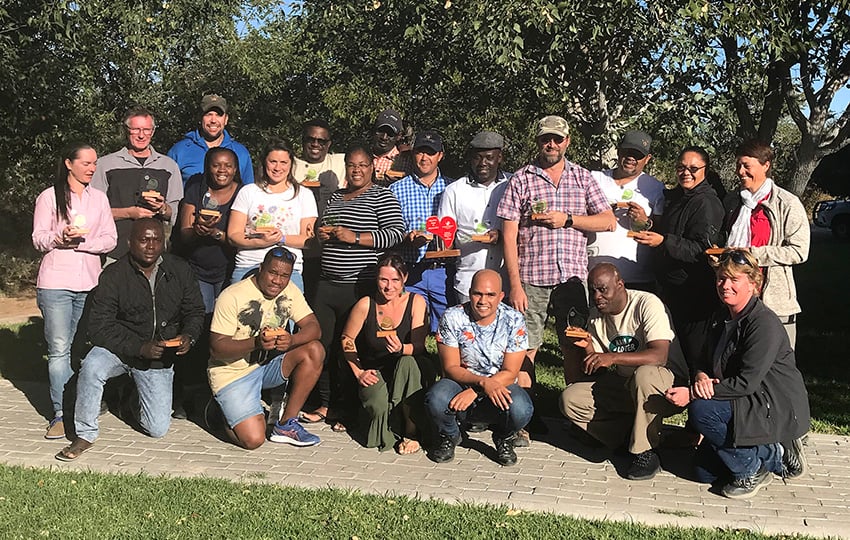 The lodge and collection managers after receiving their internal sustainability awards.

On Thursday morning, the lawn around the swimming pool at Damara Mopane Lodge resembled a large fairground. The 'Flourish Forum' gave the various departments of the Gondwana Travel Centre in Windhoek the opportunity to present their work to their colleagues. 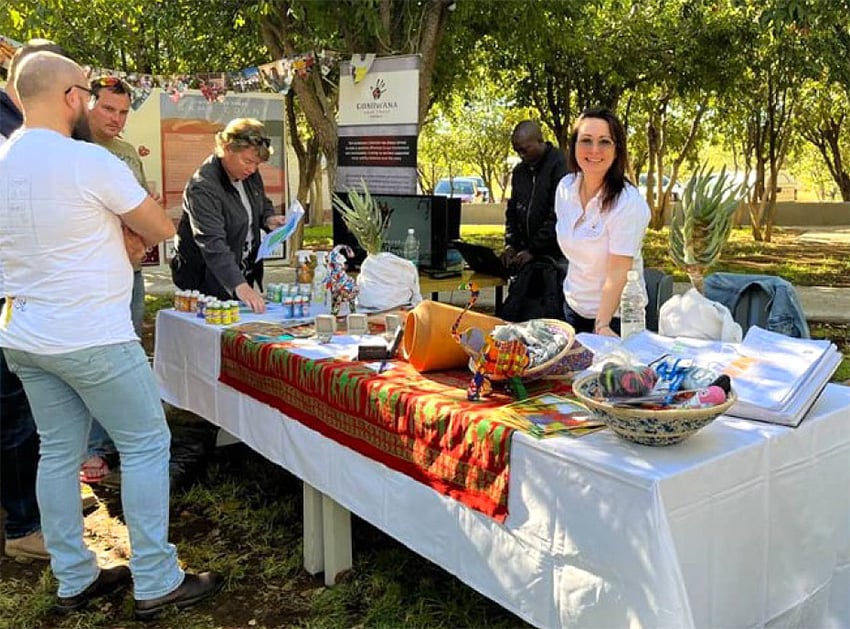 There was a lively exchange at the colourful stalls, a whole morning of questions and answers, games and also some delicacies. It was a fair of inspiration, a complete success! Next year, the lodges will run stalls and present their work to colleagues. 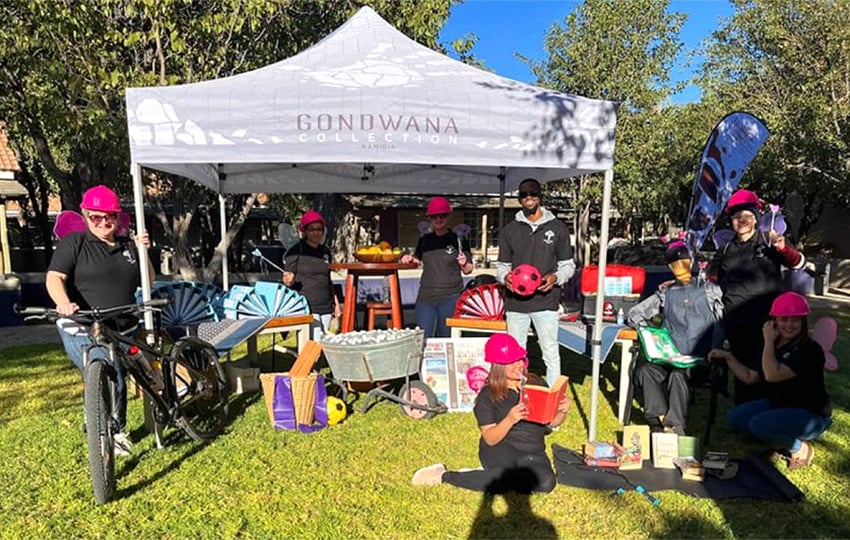 Beer festival in honour of a deserving employee

For 12 years, he and his partner had run a beer garden in Germany before the two of them returned to Namibia and took over as partners and managers of Namib Desert Lodge in 2005. Since then, Jörg Fischer has been an integral part of Gondwana and, for 12 years, contributed significantly to the development of the Namib Desert Collection. Afterwards, he applied his craftsmanship skills at the Namibia2Go car rental.

Jörg Fischer was sent into retirement in all honour with a beer festival, which brought the 'Flourish Forum' to a beautiful close.