Where the Namib Desert meets the Atlantic Ocean

On the 8th of February during our month road trip in Namibia, Daniele and I went with our 4x4 to explore where the Southern Namib Desert meets the Atlantic Ocean and reached the impressive landmark of Sandwich Harbour.

We met Ben the owner of Sand Waves in front of the Flamingo Villas in Walvis Bay for lunch time. Beautiful weather, clear sky.

After getting to know each other and had a brief for the day we turned on the engines and started our 4x4 adventure. 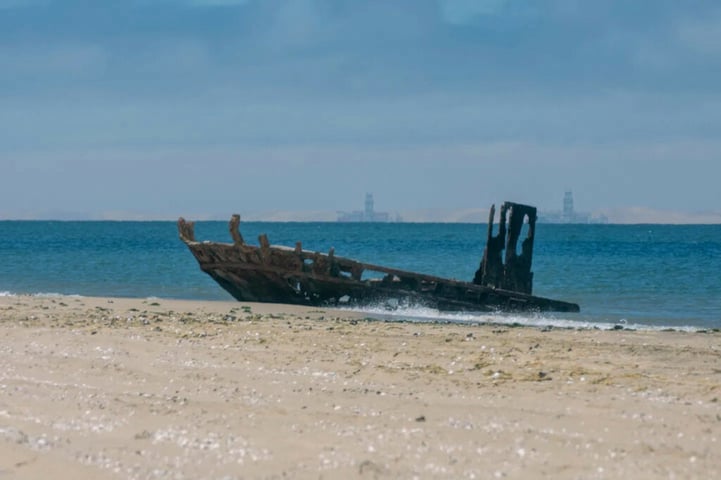 Our journey starts crossing all the salt flats, where lesser and greater flamingos flock in large numbers to pools along the Walvis Bay lagoon.

Salt Works Southwest of the lagoon is this 3500-hectare saltpan complex, which currently supplies over 90% of South Africa’s salt. As with the one in Swakopmund, these pans concentrate salt from seawater with the aid of evaporation. They also act as a rich feeding ground for prawns and larval fish.

The lesser flamingo filters algae and diatoms (microscopic organisms) from the water by sucking in and vigorously expelling water from its bill. The small particles are caught on fine hairlike protrusions, which line the inside of the mandibles. The suction is created by the thick fleshy tongue, which rests in a groove in the lower mandible and pumps back and forth like a piston. It has been estimated that a million lesser flamingos can consume over 180 tonnes of algae and diatoms daily.

While lesser flamingos obtain food by filtration, the greater flamingo supplements its algae diet with small molluscs, crustaceans and other organic particles from the mud. When feeding, it will rotate in a circle while stamping its feet in an effort to scare up a tasty potential meal.

The shallow and sheltered 45,000-hectare lagoon, southwest of Walvis Bay and west of the Kuiseb River mouth, attracts a range of coastal water birds in addition to enormous flocks of lesser and greater flamingos. It also supports chestnut banded plovers and curlew sandpipers, as well as the rare Damara tern.

After crossing the lagoon we started driving crossing the peninsula of Pelican point towards the lighthouse, our first stop.

The lighthouse, main landmark, is not situated at the edge of Pelican Point as you would expect. This is because the peninsula comprising a narrow strip of sand which extends into the sea in a northerly direction for about nine kilometres and protects the bay from the Atlantic Ocean, has grown considerably since the beacon was erected. As a result of sea currents, wind and periodic floods of the Kuiseb river vast amounts of soil were deposited on Pelican Point over the years, resulting in the sandbank now extending almost two kilometres beyond the current position of the lighthouse. 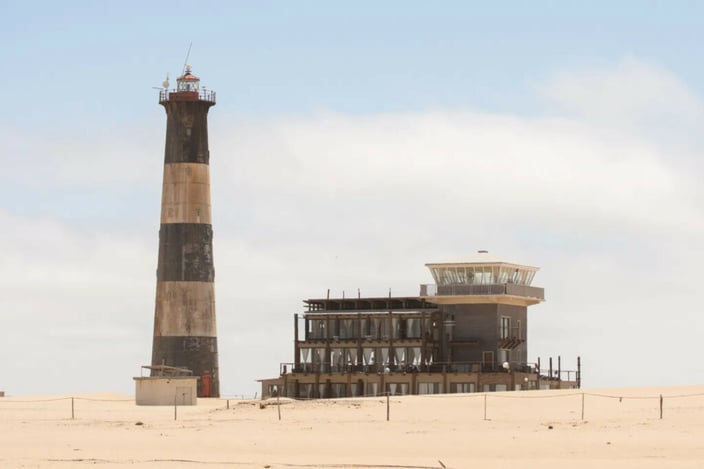 In this magical piece of land you will find hundreds of seals surfing the ocean waves, or just their basking in the sun, spot the dolphin’s, whales and mola-mola, hearing the distinctive call of the jackal roaming close by the lodge, observing their playful nature. Witness spectacular flocks of damara-terns, cormorants and flamingo’s flying or feeding in the more tranquil waters of the lagoon. Follow fishing vessels, and catamaran`s, to and from the Walvis Bay harbor presenting perfect photo opportunities on both misty and sunny days.

How to be delighted in Swakopmund