The stewardship of the Skeleton Coast

One of the world’s last wilderness areas lies sprawled against Namibia’s north-western boundary. Edged by the icy Atlantic, the desert sands stretch along the coast and into the hinterland, part of one of the oldest deserts on the planet. 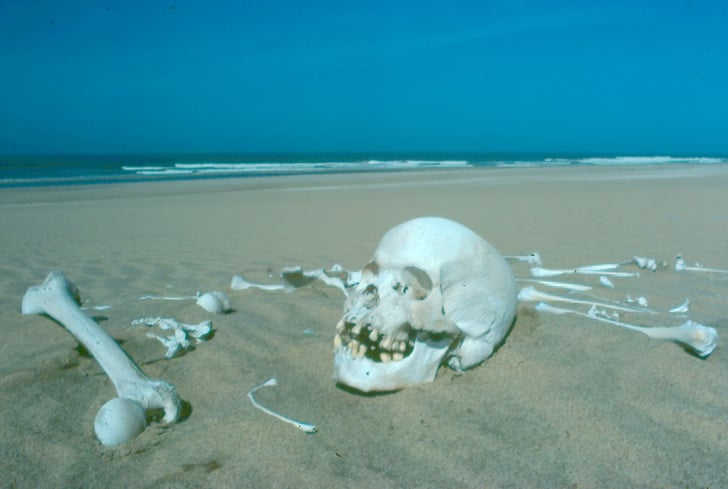 The Skeleton Coast is the famed no-man’s land that has fuelled prospectors’ search for legendary riches and hidden wealth and has lured explorers and adventurers. It has a fragile and transient natural beauty that can be seen in the tenacity of a plant growing on a rock face, a lizard or beetle’s ingenious means to survive in the desert, the changing face of sand-dunes, the chilly coastal fog hovering over the sea or the fleeting light that briefly turns the land into a sensuous feast of colour and texture as the sun sets for the day. 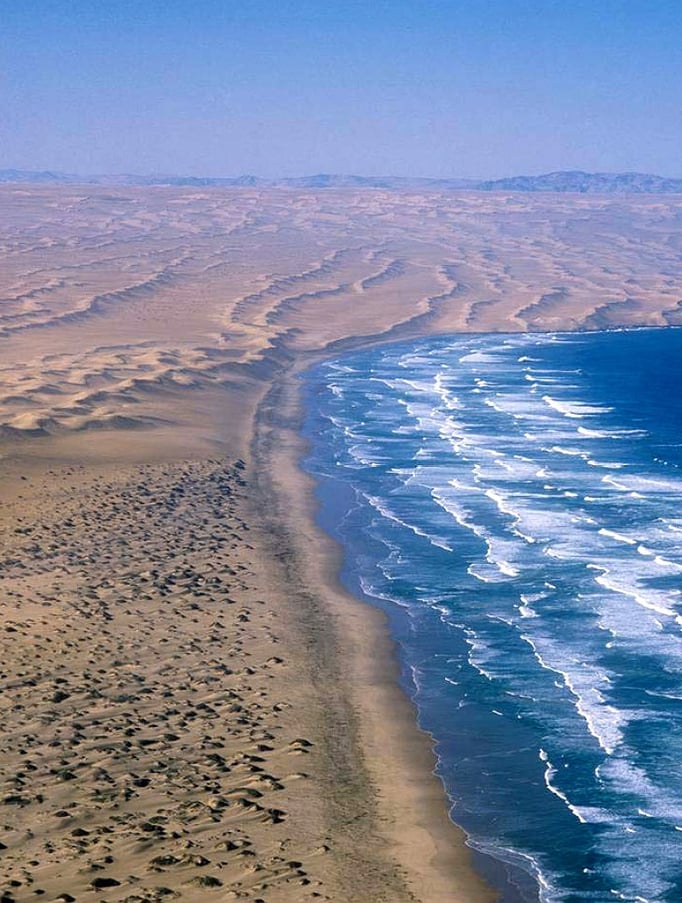 The area referred to as the Skeleton Coast runs from Cape Cross in the south to the Kunene River in the north, bordering Angola. It was first called the Kaokoveld Coast until the name Skeleton Coast was coined in 1933 by veteran Namibian journalist, Sam Davis, an apt name for an area that is strewn with whale and seal bones, flotsam and jetsam and has a history of ships wrecked along its treacherous coast. Davis reported on the disappearance of Swiss pilot, Carl Nauer, who supposedly crashed along the desert coast while flying from Cape Town to London, saying that Nauer’s bones might one day be found along the Skeleton Coast. It was a name that encapsulated the dramatic desert coastline and the name stuck.

Abandoned rusting mining machinery adds to the air of desolation. Prospecting hasn’t proved viable over the years and prospectors moved on to greener pastures. Crisscrossing vehicle tracks and ugly scars in the earth remain from diamond dreams. 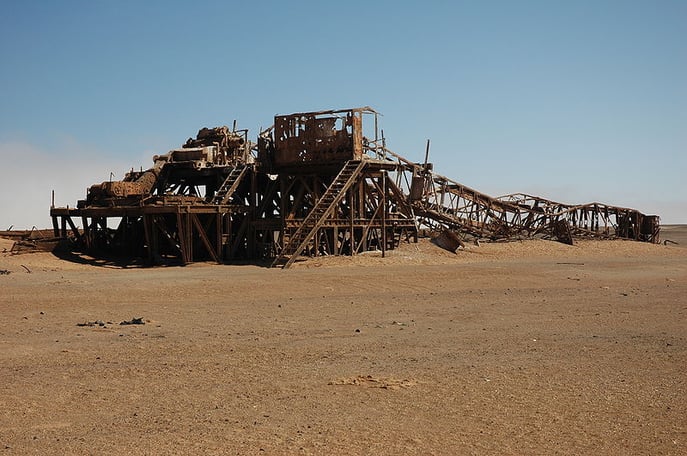 Although nomadic Strandlopers are believed to have travelled along this coast for centuries, the first historical record of seafarers approaching the inhospitable coast is from the renowned Portuguese navigator, Diogo Cão. Cão, on his second trip down the African coast in search of a route to the East, erected a cross or padrão at the place which became known as Cape Cross, in January 1486. This was to have been his last journey and the caravels returned home without him. He is thought to have perished in the desert.

Nearly three hundred years passed before Captain Messum recorded seeing Cão’s cross in the mid-1800s while searching the coast for guano deposits and looking for fabled bays. He is said to have gone ashore at Cape Cross and explored towards Brandberg. Thirty years later, in 1879, Captain WB Warren of Swallow, an English cruiser, noticed the cross. Swallow accompanied the Christina to unload supplies for the Dorslandtrekkers. They were eventually forced to offload at Walvis Bay, unable to find a suitable landing place along the desolate coast. The German gunboat Wolf found its way to Cape Cross in 1884, with wooden noticeboards proclaiming protection of the Reich, and a few years later, in 1893, Captain Becker of the Falke saw Cão’s leaning cross and took it aboard. It made its way to different museums over the years and can now be seen in the Deutsches Historisches Museum in Berlin. 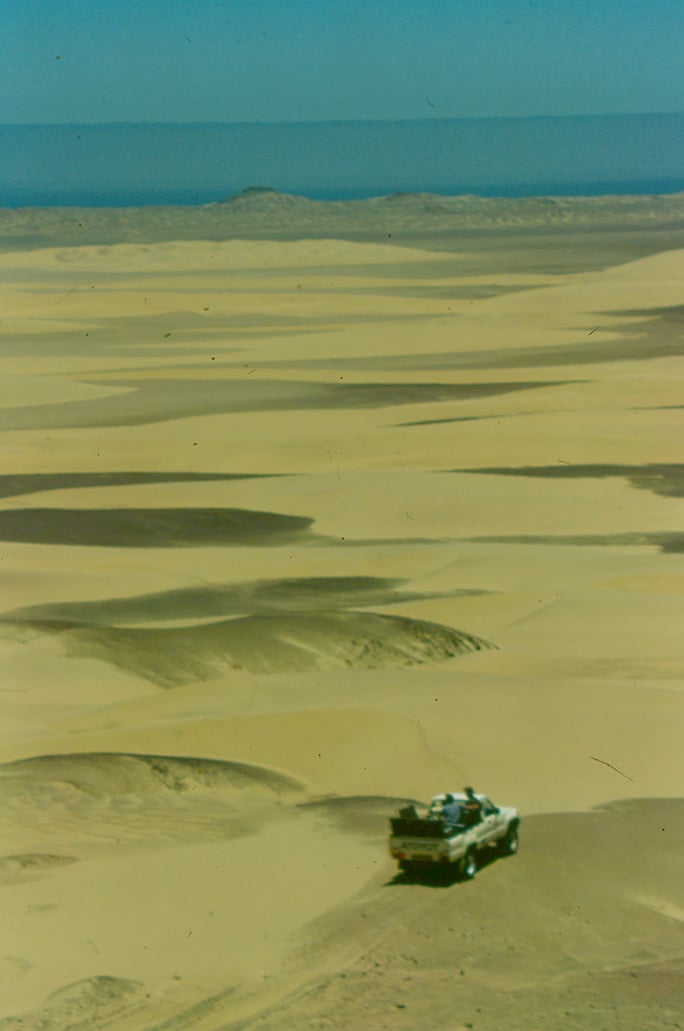 The intrepid explorers who traveled from the interior braved the harsh elements, lack of water and difficult terrain, often narrowly avoiding a tragic end. The first to undertake a large-scale expedition of the area was geologist, Georg Hartmann, on behalf of the South West Africa Company in the years between 1894 and 1900, looking for locations to establish a harbor and for guano deposits.

The loneliest stretch of coast is a graveyard of shipwrecks that quickly disintegrate into the sand and sea, providing temporary roosting sites for cormorants. The ‘Coast of Hell’, a name dubbed by writer, Lawrence Green, is known for its dense sea mist, gale-force winds, currents, swell, reefs and shoals. One of the better known stories is that of the Dunedin Star, a British cargo liner that struck a shoal in November 1942. The rescue operation involving two convoys, several ships and a Ventura bomber proved as dramatic as the shipwreck itself, having a domino effect of disaster when the tug boat Sir Charles Elliott ran aground and the Ventura bomber became bogged down in the sand.

Even today, with modern technology, those caught in a flash flood, an impenetrable mist, a saltpan or a sandstorm will testify to the power of the desert. 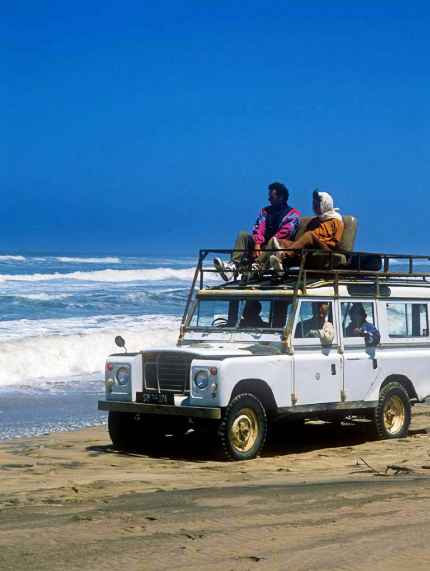 It has been realised over the years that the Skeleton Coast is home to a wealth of desert-adapted flora and fauna that have developed ingenious survival mechanisms, depending on the life-giving coastal fog that blows in from the Atlantic Ocean. Lichens, welwitschia and lithops live in the ancient landscape where desert elephant roam the river-courses and gemsbok stand atop sienna dunes seemingly defying the gods.

It has also been found that this desert environment has a delicate fragility and balance that is easily disturbed. Vehicle tracks persist, scarring gravel plains for decades, while lichen is destroyed when vehicles are driven across it, and take as long as 100 years to recover.  Fortunately, the Skeleton Coast Park was proclaimed in 1971, reaching from the Ugab River to the Kunene, a thin belt 30-40 km wide and 500 km long, with an angling campsite and restcamp at Torra and Terrace Bay, respectively, and limited access into its northern reaches. It also forms part of the proposed Namib-Skeleton Coast National Park, stretching along the entire Namibian coastline from the Orange to the Kunene.

In 1992, at the Rio Earth Summit, Namibia’s founding president, San Nujoma, recognised that ‘... the Namib Desert is Namibia’s unique stewardship...’, and that the future of this fragile desert ecosystem lies in our hands.