The healing waters of Ai-Ais: The early days

At the southern end of the Fish River Canyon, a mineral-rich hot spring encircled by rugged mountains has attracted people for centuries. It was known from the earliest times by the Nama who went there when sick to be healed by the rejuvenating waters, but Stone Age people had probably known of its existence thousands of years before. /Ai-/Ais is the Nama word for ‘very hot’ and although the clicks have been dropped, the descriptive name has been retained. Groundwater heated up in the Earth’s crust rises to the surface at about 60?C in passages created by the deep fault systems found in the canyon. 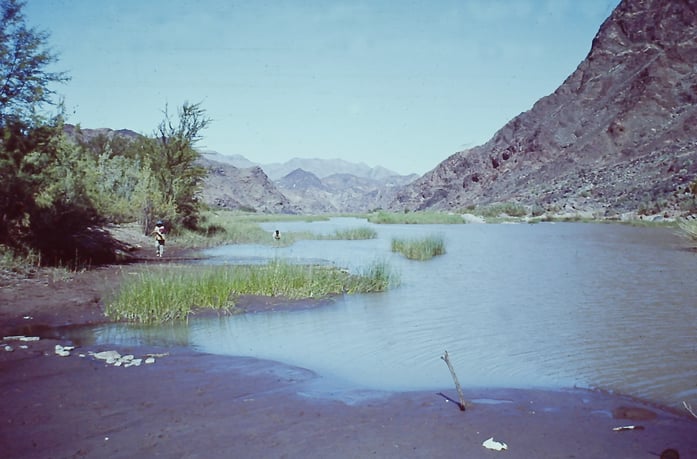 If the rocky entrance road down to Ai-Ais is daunting today, it was even more dramatic for those who travelled to the healing waters in bygone days, first travelling by ox-wagon, then donkey-cart and eventually cars and trucks that had to be routinely stopped to cool down and for their radiator water to be replenished.

Well-known missionary, Tobias Fenchel, was told “You must go to Ai-Ais” when he exhausted himself and become sick while building the Keetmanshoop church in 1890. He travelled by ox-wagon for his Badereise (bath journey) and stayed for several weeks, the warm waters granting him some relief. And although people must have sporadically visited the hotspring over the years, they started to routinely travel there for extended holidays from the 1940s. They trekked by donkey cart and built rietskerm (reed) shelters, channelling the hot water into clay depressions for baths, believing that they would live longer if they spent a few weeks bathing in the famous waters. Smaller more mobile carts were hooked onto the back of the larger donkey carts for hunting expeditions. 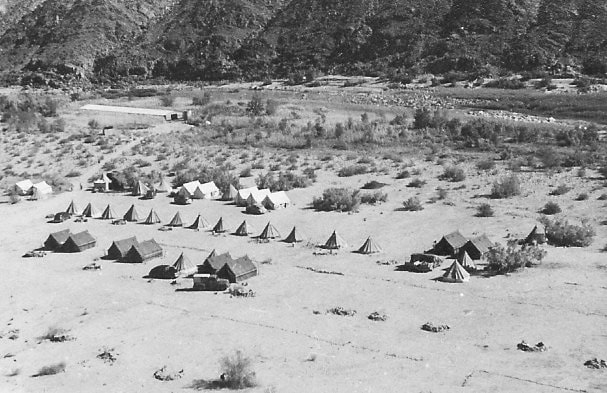 It was in the 50s however, that the holiday resort – managed by a kommandant - started to resemble a well-laid out army camp with rows of white tents. People from all walks of life – doctors, missionaries, farmers and teachers – travelled from surrounding towns and sheep farms. Some travelled all the way from the Richtersveld in the Northern Cape, from places like O’okiep and Springbok, stopping at the Orange River en-route, and some came from as far afield as Malmesbury. They spent several weeks of the winter at Ai-Ais where a pool had now been built amidst the Phragmites reeds and corrugated iron change rooms had been erected. Workers and house-maids were brought along to help with the cooking and cleaning, a beer depot supplied liquid nourishment and a small shop stocked cans of food and tobacco. Ai-Ais salt was even sold and taken home to be used for the rest of the year when everyday life resumed.

Life fell into a relaxed rhythm at Ai-Ais. Pieter de Waal described the languid Ai-Ais routine and the colourful characters that assembled there in Die Suidwester Vakansie-Byvoegsel (holiday supplement) in December 1950. In the mornings, the ooms and tannies (uncles and aunts) walked to the change rooms and the women would emerge dressed in gowns and towels so as not to catch cold on their way to the pool. Here they would gather, donning their large boerekappies (farmer caps) from which only their noses were visible, and swap information, reporting on their aches and pains – the old and the new, if and how they were recuperating, and how many cups of healing water they drank in the day. They had heard that Oom Jaap Ekstein from Karas, for example, believed that drinking the muddy rather than the clear water helped him (and he drank sixteen glasses a day!) while others were of the opinion that packing the hot mud on their bodies had beneficial health benefits.

All the chatter ceased from 11am when it was designated relaxing time and a deathly silence descended on the camp. At lunchtime, the clatter of pots could be heard and delicious aromas began to waft over the tents while the karakoelvleis (karakul meat) and pampoen (pumpkin) sprinkled with cinnamon simmered on the fires. It was then rest-time again until 4pm when the holidaymakers exhibited a burst of energy and would play jukskei, take another bath, congregate for an hour of prayer, eat and then begin to recount stories around the fires in the evenings as the sun dipped behind the mountains and a heaven of glittering stars appeared. The stories, sometimes funny and sometimes tragic, ceased at 10pm when all ears were tuned to the radio and an announcer’s voice crackled over the radio waves from Johannesburg. The fires from the workers flickered in the distance and you could make out the ‘gedoem-doeke-doem’ from an old guitar. 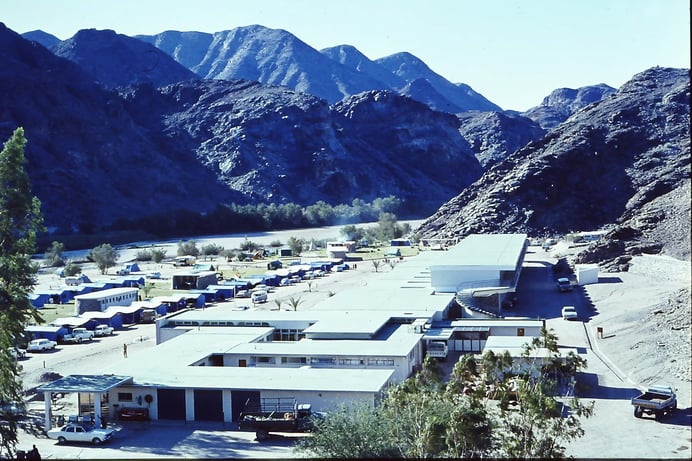 These memorable days at Ai-Ais were recorded on sepia photographs and pasted in photo albums to be passed on through the generations. Ai-Ais continued to gain popularity over the years as a holiday resort, attracting more and more people from far and wide. In the early 1970s the next stage of development would begin when chalets and a reception area were constructed, and then, later on, it would be rebuilt after floods and renovated and refurbished to keep up with the times. Throughout all the changes of the decades, holiday snaps show children playing happily and contented folk floating in the warm, healing waters of Ai-Ais.