For centuries the Ngandjera and Kwaluudhi have occupied the western regions of the area formerly known as Ovamboland.  In the past the coiffures worn by their girls and women were of such stunning beauty that they were known far beyond their tribal areas. The Ngandjera were also known as blacksmiths and as traders of iron products. With the exception of the Kwanyama, women of the western and southern OvaWambo groups all used ox sinews for lengthening their hair. The differences that existed merely applied to the specific structures of headdresses. Especially the headdresses of Ngandjera and Kwaluudhi women were very similar.

Already at the age of ca twelve years young girls started to prepare their hair for later headdresses. For this purpose they covered their heads with pasta made of finely ground tree bark of the omutyuula-tree (Acacia reficiens) and oil of the fruit of the oshipeke-tree (Ximenia caffra). The headdress was known as onyangha. 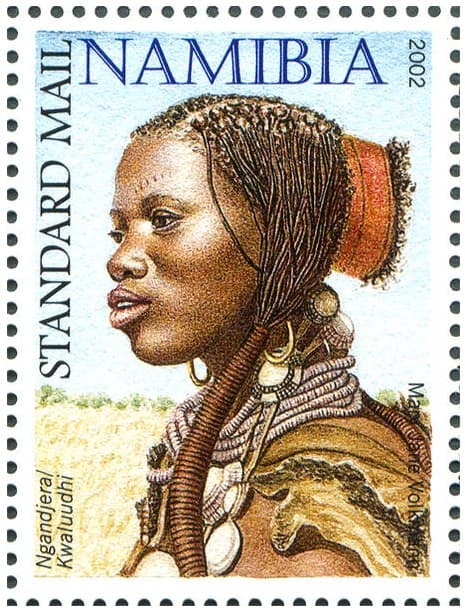 Shortly afterwards the pasta was removed and, in order to straighten the hair, the fruit pips of the wild date (Phyllogeiton discolor) were attached to the hair by means of ox sinews. The headdress was referred to as omulenda.

Once the girls had reached the age of ca sixteen years they were called omufuko (pl. aafuko) and entitled to participate in the ohango initiation ceremony. After removing the fruit pips of the previous headdress the existing sinews were lengthened with additional sinews, which were suspending down over the back. Just before Kwaluudhi girls entered the ohango ceremony, their sinew strands were converted into at least four arched, hornlike structures, which were wrapped with red-coloured palm leaf strips. The colouring was achieved by leaving the palm leaf strips for some time in a mixture containing finely ground particles of the root of a half-rotten Rhodesian Teak, which had coloured the mixture red. The "horns", known as oshipando (pl. iipando), were dangling over the shoulders. Ngandjera girls instead left their sinew strands hanging loosely and a special hairpiece, the so-called oshikoma, was fastened on the back of their heads. It consisted of a thick bushel of hair, which was kept in position by red palm leaf strips, which were wrapped around it. In order to increase hair growth, the hair bushel was sometimes covered with the pasta of finely ground tree bark and oil. Some girls also attached ivory buttons to the back of the head, which were worn as pendants. 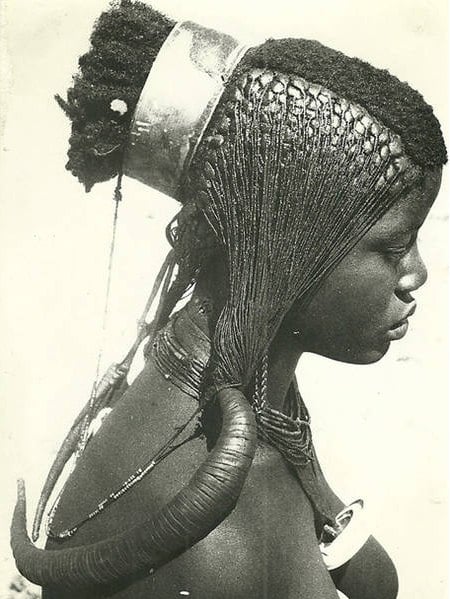 Once the Ngandjera girls were adorned with the oshikoma and the Kwaluudhi girls had the iipando made, the ohango ceremony could proceed. According to historical sources the term "ohango" can be translated as "time of suffering" or "to suffer" as it was regarded as a fitness and pregnancy test for the girls. In the olden times the ohango ceremony lasted at least four days. During this time the aafuko-girls had to sit squeezed together tightly in blazing temperatures in a palisaded enclosure. The only food they were allowed to consume were two drops of corn juice, which they were given on the fourth day. Apparently the ceremony was formerly of such harsh nature that some girls succumbed. However, during the 1960s, it only lasted two days und was no longer accompanied by the extreme harshness of the old days. Apparently in those years the ceremony did no longer take place in the Ngandjera and Kwaluudhi areas, but in the neighbouring Ombalantu-area.

After the ohango was over, the girls were regarded marriageable. The Ngandjera girls converted their long hanging sinew strands into two "horns", which were also known as iipando. The oshikoma and the iipando were worn by married women for many years.

As a result of the increasing activities of missionaries, migrant labour and the influences of the Administration, the old dress pattern gradually disappeared and already during the 1960s very little was left of it. The oshikoma and iipando headdress of Ngandjera women was still worn during the 1970s in the form of wigs. The palm leaves had been replaced by shiny, red plastic band.