Namibia Map with Routes and Stories

Here is a hot tip for all Namibia fans: the new road map 'Gondwana’s Classic Routes', fresh from the printers. This map features fascinating routes plus recommended accommodation and many exciting stories about interesting places. At the same time it is also an ordinary road map with all the essential information of the official Namibia road map by Prof. Uwe Jäschke and the Roads Authority of Namibia, which is sold by book stores and souvenir shops.

On the map which has now been published by the Gondwana Collection routes for exploring the country’s south and north have been highlighted. The routes are laid out in manageable daily segments with Gondwana’s lodges and campsites marked as overnight stops. Additional accommodation establishments recommended for the north are Mushara on the eastern fringe of Etosha National Park and Waterberg Wilderness on the south-eastern slope of Waterberg Mountain. These are places where Gondwana does not offer any accommodation but which lend themselves as a destination along the route. Pictures and brief descriptions of the lodges on the side of the map help with the choices and increase anticipation. 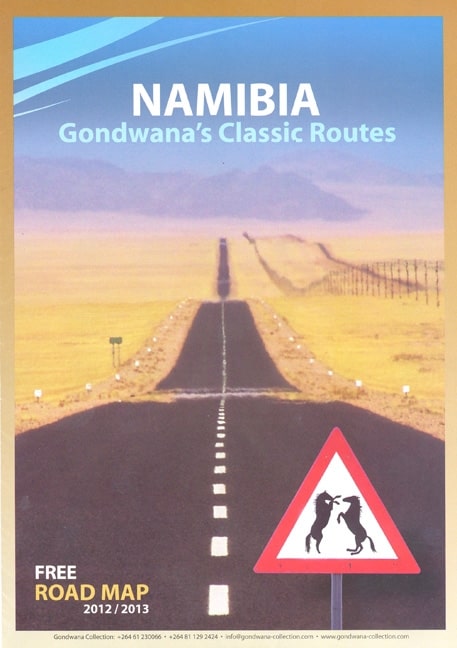 The 40 numbered dots which mark particularly interesting places and sites are a special feature of this map. They include grand sights like Sossusvlei or the Fish River Canyon but also places which have a fascinating story. These places are described with a few lines and a picture on the reverse of the map. Many of the stories are taken from the 'Gondwana History' series of books.

The road map Gondwana’s Classic Routes is available free of charge in English, German and Afrikaans – from the Windhoek office and all the lodges of Gondwana, from Mushara and Waterberg Wilderness.