When you pass 'Martin Luther' just outside Swakopmund and have heard the story of the road locomotive you will probably chuckle spontaneously. But is the story that is told about the monstrous steam engine in fact correct? Was the whole idea really that crazy?

The discrepancies already start with the name. According to historians the famous words "here I stand, I cannot help it", which Martin Luther is supposed to have uttered in 1521 after his interrogation by the Imperial Diet in Worms were never spoken. The derisive name for the vehicle, which got stuck 1.5 km outside Swakopmund and was abandoned there, is therefore on shaky ground. The time of naming is also wrong: The joke about 'Martin Luther' was already doing the rounds before the steam engine had even driven its first few metres in the Namib...

But back to the start. As more and more settlers arrived in the country at the end of the 19th century, the volume of goods increased as well. Ox wagons were the only mode of transportation for heavy loads. However, almost 100 km of desert had to be negotiated on the way from the coast into the interior. There was nothing to feed on for the oxen and they were worn out completely. Many oxen died and the route was lined by their skeletons. The surviving animals needed months to recover from the ordeal. Therefore only three return trips per year could be made from the coast to Windhoek. It was still very early days for automobiles and plans for a railway line remained shelved because of the costs.

In this situation senior lieutenant Edmund Troost had the idea to import a traction engine. His steam ox, as he jokingly called it, was supposed to drive from Swakopmund via Nonidas and Goanikontes to meet the ox wagons at Heigamgab and save them half the trip through the desert. "The route up to almost 2 km out of Swakopmund was (...) hard, of a rocky nature", Troost stated. He also felt that enough water for the steam engine was available along the route. At his own expense he shipped the vehicle from Germany after obtaining the government’s assurance that public goods would be transported with his vehicle.

However, even the vehicle’s arrival in 1896 started with a glitch: It could only be off-loaded in Walvis Bay and the departure to Swakopmund was delayed by business in Cape Town and unrest among the country’s Nama and Herero population until the contract with the engine driver had expired. As Troost reported later on, the nickname 'Martin Luther' had already been coined at that stage. First an American gold hunter, and after him a Boer, tried to drive the vehicle. The deep sand became a gruelling obstacle: The behemoth got stuck every 50 metres and shovelling it clear was a tedious process. Labourers simply stayed away, water had to be obtained up to 30 km away. Three months passed before the steam ox finally huffed into Swakopmund. 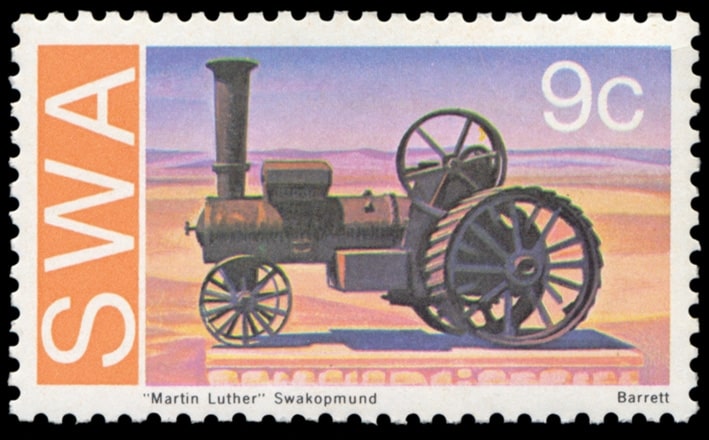 But there was no end to the problems. The engine had to be stoked for three hours before the vehicle was able to move. Troost lamented that at times it was operated for only three hours per day because the engine driver insisted on his breakfast and lunch break. In retrospect he also said that the 2-metre tow bar to the wagons proved too short, causing them to swing off heavily to the sides on the uneven surface. A 10-metre tow bar would also have been an advantage when crossing sandy riverbeds because at least the vehicle and the wagons would not have gotten stuck together.

The last blow for the steam ox already came after less than ten transports. Some 1.5 km out of Swakopmund several pipes melted in the boiler because apparently there was not enough water in the steam system. Repairs were not worth the effort since in the meantime governor Theodor Leutwein had received confirmation from Germany that a narrow-gauge railway line was going to be built from Swakopmund into the interior..