Kaokoland rightly rings of romance and adventure. A gravel artery runs northwards like a yellow brick road into an intriguing new world. Kaokoland is home to vast dramatic landscapes, exotic Himba people, desert-adapted elephants, and in the far north, Epupa, wherein a belt of makalani palms the Kunene River exuberantly tumbles down the craggy rocks.

Exploring this more remote region is a journey that elicits an excitement that is palpable. And I have the good fortune of traversing it in Gondwana style and spirit. My journey begins at the green oasis of Damara Mopane Lodge, east of Khorixas, with its nourishing food gardens, and heads westwards following the loveliness of the Huab River valley until the road veers north. As the landscape transforms into the spectacular scenery around Palmwag Lodge, Camping2Go and Campsite, I have the distinct sensation that I am crossing an invisible boundary. Red table-topped mountains dominate the landscape and the rugged plains are punctuated by the green of mopane trees, stout shepherd trees, and rod-like euphorbias. Giraffes eye me curiously from the roadside and the gigantic footprints of elephants on walkabout pock the sand. 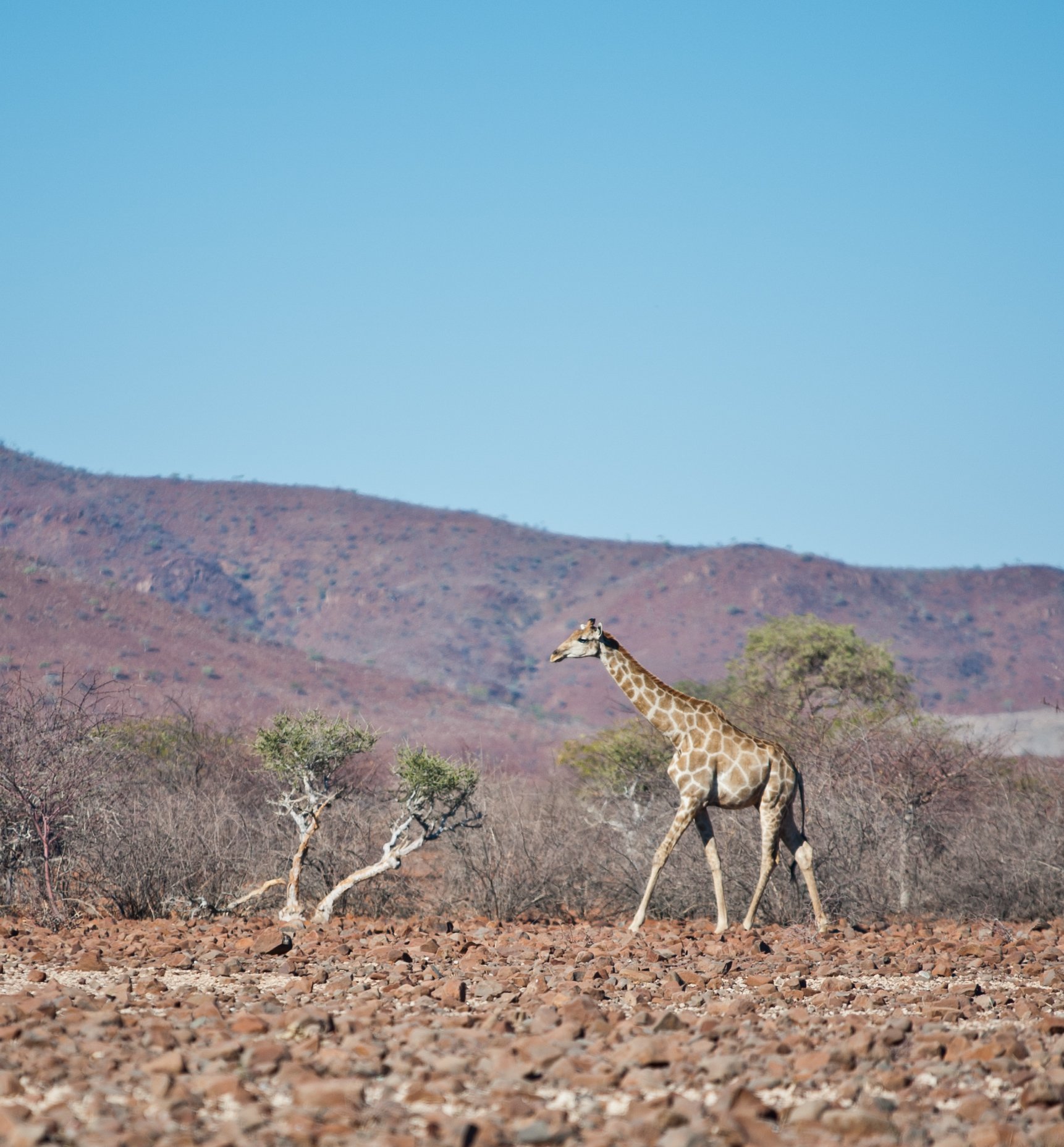 Soon after the veterinary checkpoint, the sign for Palmwag comes into view, and then the lodge itself positioned next to a tributary of the Uniab River lined with swaying makalani palms and riverine vegetation. The Uniab’s underground water attracts an array of wildlife and one elephant in particular called ‘Jimbo’, who has adopted the lodge grounds as home.

Feeling the earth underfoot at Palmwag

Palmwag collaborates with its neighboring conservancies, the Ministry of Environment and Tourism, and Save the Rhino Trust to safeguard the 582 000-hectare Palmwag Concession, a vast conservation area adjoining the lodge. A highlight of a stay at the lodge is the opportunity to go rhino tracking in the nearby conservancy with the rhino rangers. To deter poachers, the majority of the rhinos in the conservancy have been dehorned. I’m apprehensive when I wake before dawn, and shower to rid my body of any lingering scents that could upset the black rhinos, known to be among the most belligerent large animals with their poor eyesight and sharp sense of smell. My heart continues to thud like a beating drum as the day brightens and the rangers, spotting a female rhino in the distance, stop the vehicle to investigate. When we receive the all-clear, we follow them on foot to a spot where we have a good view of the rhino from a safe distance. After watching her snack on the vegetation, we quietly retreat and return to the vehicle where the rangers present us with information about how they identify and keep detailed records of each rhino. My heart calms and the sun shines as if commending them on their conservation efforts, and I ponder the logic of decimating a species for horns that are little more than the substance of hair or fingernails, but inexplicably command a price higher than gold. As we start the vehicle and leave, I throw a blessing to the wind that they will still roam these wild expanses in years to come, so that our grandchildren will also have the chance to marvel at the magnificence of a rhino cow on a sunny Namibian day.

In the afternoon, I join a guided walk around the lodge to feel the good Palmwag earth underfoot before lapping up the pink and purple colours of the sunset as they deepen and soften and then give a final bow, leaving the stage to the first stars that twinkle above. 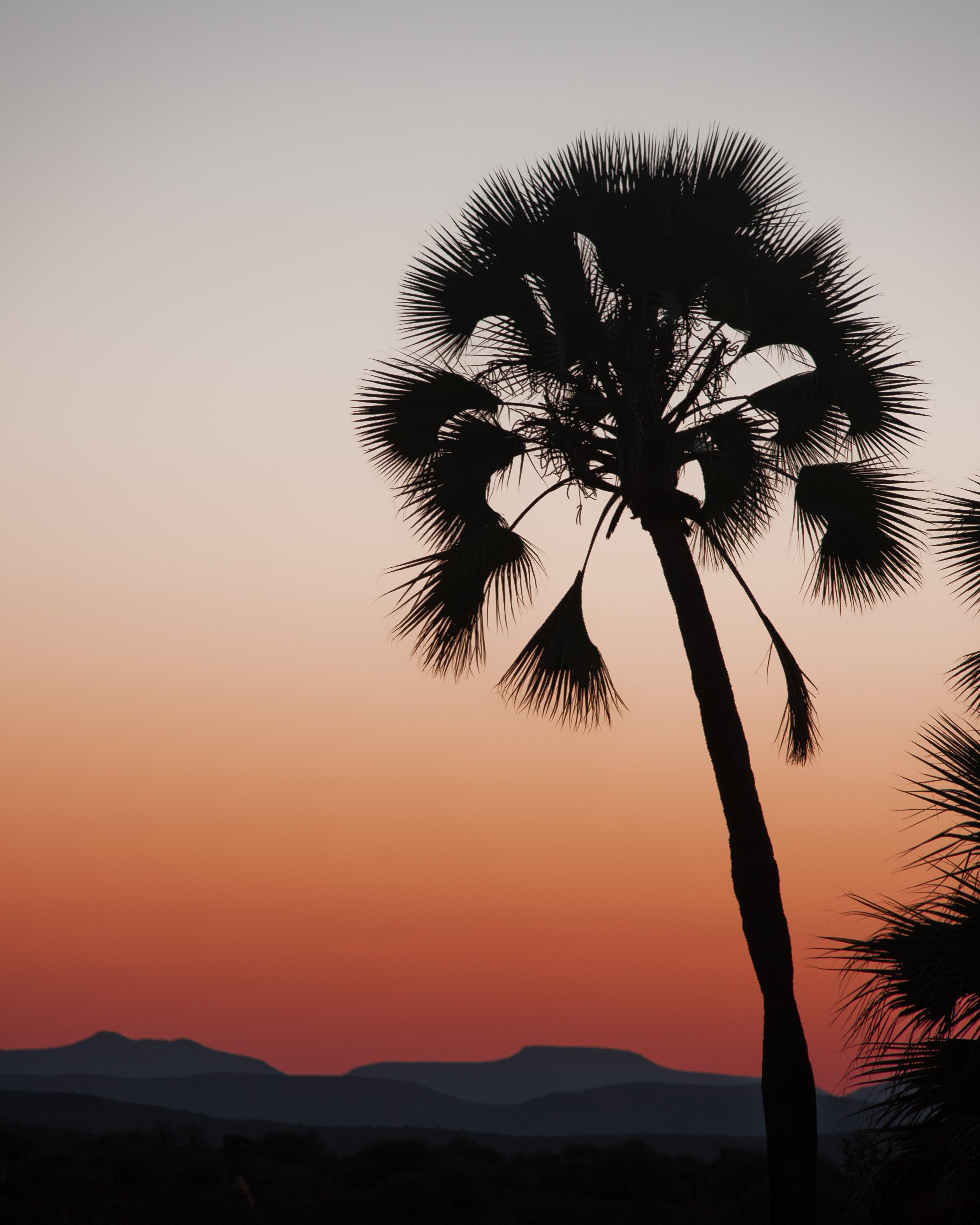 Although it is always tempting to linger, Epupa is calling, so in the morning, I take the rollercoaster drive northwards towards Sesfontein and continue on the slow-going Joubert Pass to Opuwo. The town is a frontier territory where the visitor is in for a surprising cultural experience as Himba, Zemba, Hakahona, and a bevy of Herero women in their intriguing traditional dress mix with their more conventionally-attired contemporaries on the dusty streets. It is further indication that I have entered the Kaokoland realm where the unusual and extraordinary are considered the norm. I travel further into this new and fascinating world as I drive to Epupa on the far northern border. Baobabs along the route add their regal presence and eventually, a belt of makalani palms reveals its beauty as I descend to the Kunene River and the magic of this small African settlement.

My base is Omarunga Epupa-Falls Camp, a relaxed retreat of wood, canvas and thatch on the riverbank that exudes Epupa charm. The soft song of the falls accompanies the calls of the rosy-faced lovebirds and the mourning doves flitting between the trees. The lodge’s sunset excursion to a viewpoint overlooking the falls is the cherry on the top of the rich and delicious Kaokoland delight. The golden colours glimmer and dance as we raise glasses to the beauty of the vista – and our good luck at being there.

High up on my wish-list is a visit to a Himba village and the lodge kindly organizes a trip to a nearby Himba homestead with a Kaokoland guide. He enlightens me on the customs and traditions of the Himba. It is a privilege to visit one of the last semi-nomadic desert-dwelling people in Africa, as is a visit undertaken in such a respectful manner. My understanding of beauty receives an awakening as I am introduced to the striking Himba women with their red patina and unusual adornments. We ask each other questions about our very different lives. “How many children do you have?” “Are you married?” And we gently touch each other’s hair and laugh.

It tugs on my heartstrings to leave this peaceful village and return to the busier world. I retrace my steps to Opuwo, giving rides to Himba women who flag me down along the way, and then I join the tar road to travel eastwards through the culturally-rich Owambo communities. My next destination is Etosha King Nehale on the northern periphery of Etosha National Park where an entirely different and exciting experience awaits me. Aah, but that is a story for another day.