Having previously stayed at two of the Gondwana lodges in the vicinity of the canyon (the wacky Roadhouse and the Lodge), I hadn’t as yet experienced the Village. This was my chance.

Each lodge has its own character. The Roadhouse has its frontier-like atmosphere; the Lodge, its century-old farmhouse reception-restaurant area and bungalows nestled elegantly amongst the boulders; and the Village pays tribute to the early Nama people of the area and the history of the South.

A pile of stones referred to as a Haitsi Aibeb lies at the Village entrance in deference to the Nama deity of old. Haitsi Aibebs are visible in many parts of Namibia, usually adjacent to ancient paths or in the vicinity of watering holes, and are held in great respect. Travellers would stop, place a stone, twig, portion of venison, honey or tobacco and kneel down in prayer as they asked for favourable conditions and good hunting. Upon leaving, it was forbidden to look back. So, it’s best to pay your respects, ask politely for protection for your journey and move on!

I was drawn from my bungalow and my laptop by laughter as a donkey cart filled with children and luggage passed by on the path between the bungalows. I followed it to the front of the lodge. Usually used to transport a group’s luggage to the bungalows, it was now being used to transport a family the few kilometres from Village to Lodge. I snapped the happy faces of the party. 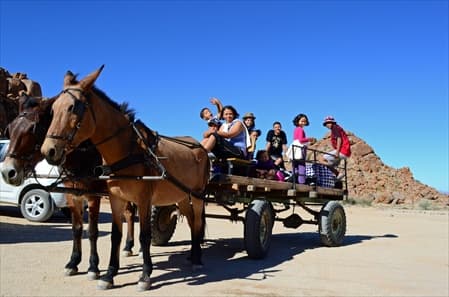 This was a different kind of lodge. Favoured by large groups, the 42-roomed lodge is built between a rocky mountain and granite boulders. The stone-clad bungalows are laid out in a circle within an amphitheatre of rock. The sprawling thatch-roofed interior, which is reception area, restaurant, souvenir shop, bar and lounge is lined with murals of Nama scenes. These range from a large mural in the entrance depicting life during the golden years of the mission stations to smaller renditions of various Nama traditions, dome-shaped grass dwellings (matjieshuise) and historic figures. The bungalows also contain paintings of Nama scenes and people who featured in the history of the south. Patchwork designs on the bedding and springbok skin mats hint of the traditional Nama skills, while the Cape Dutch style of the bungalows would have been introduced by Nama groups who travelled up from the Cape.

An ox-wagon with a century of adventures, experiences and hopes ingrained in its weathered timbers is positioned behind the buffet area and a horse cart stands amidst granite boulders and fireplaces in the bar. There is many a story at this lodge, stories that fill history books, bookshelves and memories. Gondwana is ensuring that many of these are recorded in their weekly newspaper columns and Gondwana History series, before they are lost to the past.

The experience reminded me that the land doesn’t only hold a wealth of flora and fauna but the rich history of the people who made it their home.