Fire & Ice team up for the Cape Epic

Two passionate mountain bikers from opposite sides of the globe, separated by 10 000km, team up for the legendary Absa Cape Epic. Piet Swiegers, the 48-year-old Namibian Veteran cross-country mountain-bike champion from Aus, in Namibia’s arid south-western corner, will join 55-year-old Swedish Masters mountain-bike champion, Atle Hansen, from Hölö, Sweden, to cycle the Cape Epic on the 13-20 March 2016. And, if past achievement is anything to go by, the team will provide stiff competition to other riders in their category. 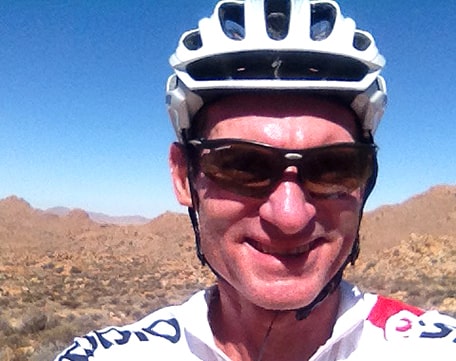 Atle received a surprising email on the 23rd December from Piet inviting him to ride with him in the Cape Epic, after Piet’s previous partner had to withdraw suddenly from the race. Atle was deep in winter hibernation and had to quickly change pace to get into top shape.

While Piet has been training in the southern Namibia temperatures of around 30?C, Atle has had a completely different experience. His training has been slightly more uncomfortable at temperatures of minus 15-18?C. He reported: “It’s cold as Hell. It’s almost impossible to ride outside, my feet go white from the cold even in the special shoes I wear that have battery-operated heated soles – and two pairs of wool socks!” 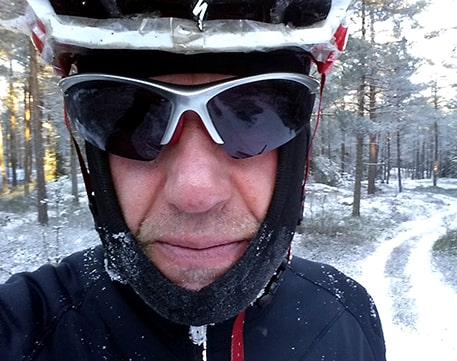 One of Namibia’s top ten cyclists, Piet Swiegers came fifth in the World Veteran Cross Country race held in Pietermaritzberg in 2013, and fifth again in the Veterans race in the Rainbow Challenge XC Marathon held in Pietermaritzberg in 2014. His training comprises a 6-8hour weekly regime on the network of mountain bike trails he has created at Gondwana’s Klein-Aus Vista Lodge, a family run lodge in the rugged hills of Aus. He also initiated the Klein-Aus Vista Mountain Bike Challenge, which takes place annually in April/May, adding a fascinating 3-day-stage race, mostly on single track, to the MTB circuit. In preparation for the Cape Epic, Piet has been training 10-12 hours per week since December and will start to take it easier from the beginning of March. 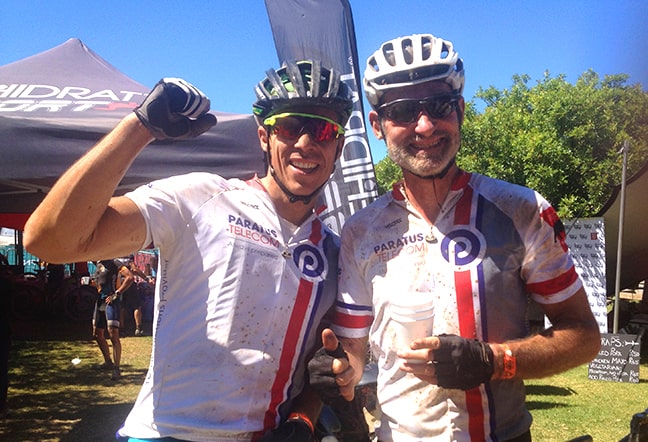 Piet Swiegers (r) after the W2W Race in South Africa with his partner Ian Grassow.

His teammate, Atle Hansen, is a well-known cyclist on the European circuit who spends around 700-750 hours a year on a bike. Hansencame fifth in the World Masters Cross Country race held in Pietermaritzberg in 2013 and in 2014 came in second in the Masters race in the Rainbow Challenge XC Marathon. This is where the two cyclists met, while staying at the same lodge. 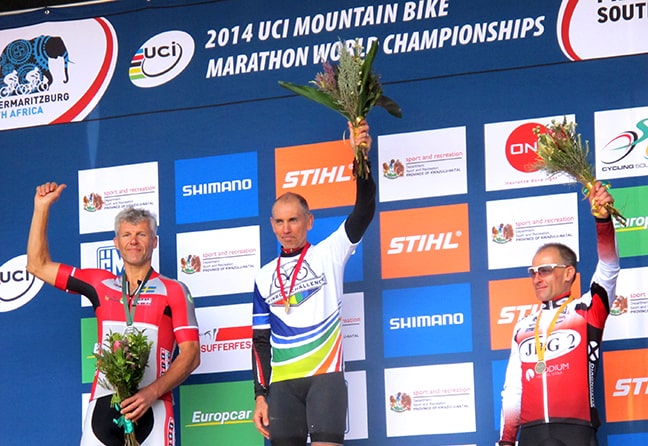 Atle will join Piet in Windhoek on the 4th March where they will train for the day before travelling to Sossusvlei, for a day’s riding to the dunes, heading back to Klein-Aus Vista to continue the rest of their final preparation on the Klein-Aus tracks. The ‘Klein-Aus MTB team’, as they call themselves, will depart on the 10thMarch for Cape Town to partake in the Absa Cape Epic Prologue a few days later on the slopes of Table Mountain. This 21km event incorporates a cross country course and a steep climb. Team Klein-Aus MTB aims to secure a start in Group B for the next day’s Stage 1 event.

The team’s intensive training programme will provide excellent preparation for the 13thAbsa Cape Epic, against 650 other teams. This gruelling 8-day event, attracting local and international mountain bikers, leads the amateur and professional cyclists through 800km of unspoilt scenery and 15 000m of accumulated climbing, over some of the Western Cape’s magnificent mountain passes. The route this year takes cyclists through the hilly Tulbagh area, with rugged ascents likened to sharks’ teeth, and over the old wagon trail in the Witzenberg Mountain Range and the Bainskloof Pass to Wellington. During the following days, five steep climbs lead cyclists towards Stellenbosch and wine god Bacchus’s garden with a view from the vineyards towards False Bay and Table Mountain, climbing Meerendal’s ‘Stairway to Heaven’ before reaching the Cape Epic finish in Durbanville. Participants spend at least six hours per day in the saddle. 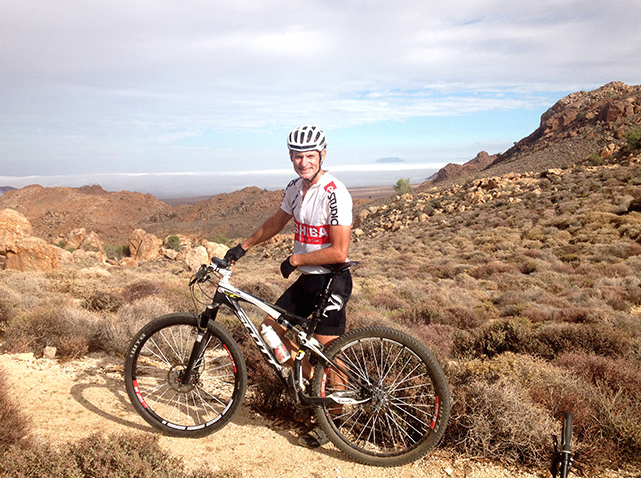 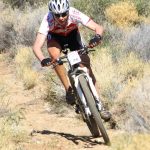