A swarm of honeybees makes its way into the hive – with yellow pollen pants! It is an astonishing sight – incredible in every sense of the word, especially because this is in one of Namibia’s most arid regions. Welcome to Kaokoland – a true wilderness that is home to the Himbas, the world’s last semi-nomadic people. 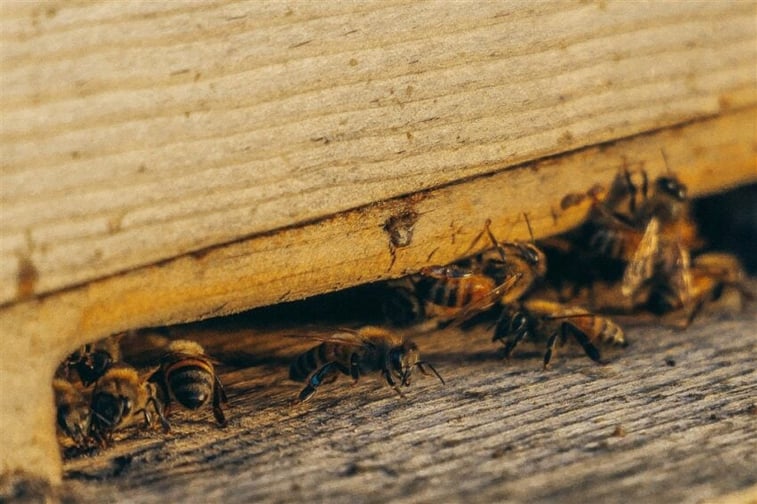 When honeybees moved into campsite number 6 at Omarunga Epupa-Falls Camp, we thought it was a miracle, since the vegetation in the immediate surrounds is very limited. A beekeeper carefully relocated the bees to a spot nearby that would benefit both bee and camper. The tiny creatures that play a huge role in the ecosystem adjusted very well and when they returned to their new hive covered in pollen, it felt like Christmas all over again.

I am always keen on a holiday away from the crowds, so a friend and I hit the dirt road to Omarunga Epupa-Falls Camp situated on the Namibia–Angola border. As we made our way up, down and around several hills and through many mostly dry ephemeral rivers in the rugged landscape dotted with mopane trees, we finally caught a glimpse of the green oasis. Surrounded by makalani palm trees and lush shrubs and grass on the banks of the perennial Kunene River, Omarunga Epupa-Falls Camp invites travellers to kick up their feet and relax. With so many hammocks between the tented chalets, we had no other choice! Of course, you can also opt for the campsite if you are equipped for camping. 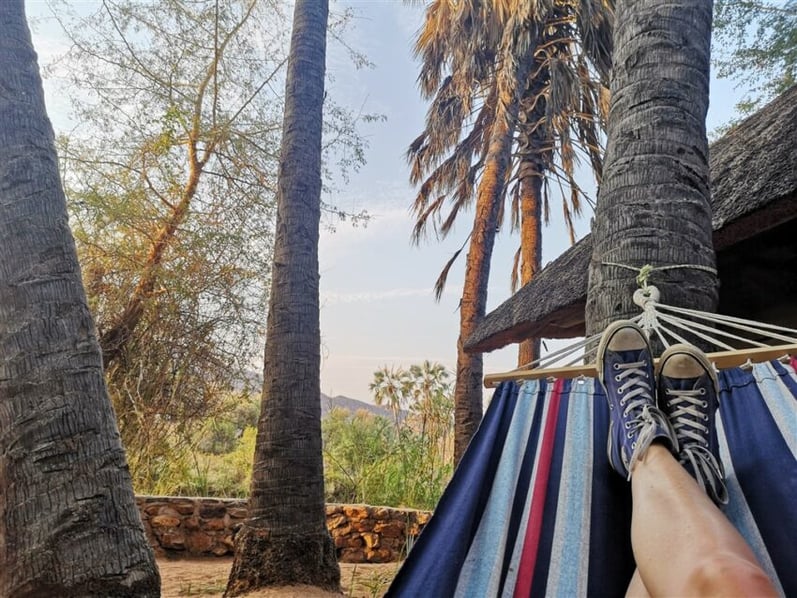 If you love exploring your surrounds by participating in activities, then you will be excited to know that there is a lot on offer. Is culture your thing? Then a guided Himba village tour beckons at the top of the list. The well-known people covered in the distinctive ochre colour welcome visitors accompanied by guides, as guides speak their language – Herero – and are familiar with the cultural do’s and don’ts. 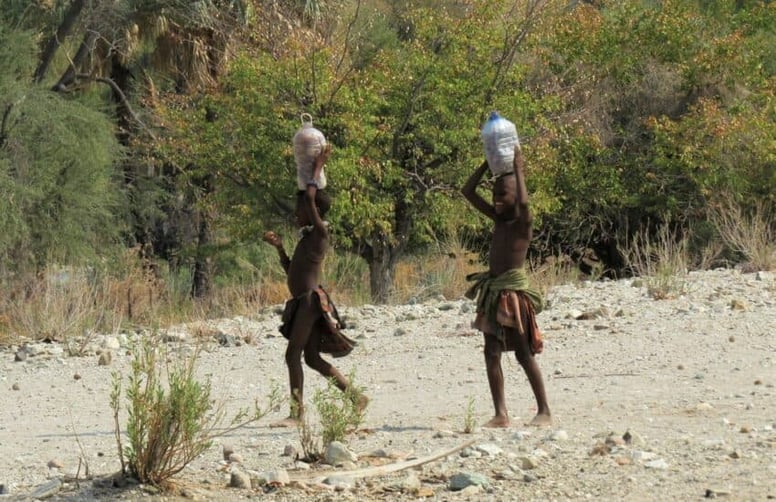 A true wilderness that is home to the Himbas © Annelien Robberts

On our visit, they invited us into one of their huts where they introduced us to their accessories and cosmetics. We could smell and try on their perfume, as well as the ochre mixture that they put on their skin to protect themselves from the sun and from insects. My friend Astrid tried on the crown that women wear after they get married. Speaking of which, the chief of the village was surprised to learn that Astrid and I, both in our 20s, were unmarried and travelling unaccompanied by men.

After talking with them (thanks to our interpreter) and asking our questions while sitting around the fire, we went to their market where they sell arts and crafts – one of their main sources of livelihood. At the end of the visit we showed our gratitude by giving them gifts that the children happily fetched on behalf of their parents. A little boy picked up the bag of mealie meal, and after a few uncertain steps back and forward on the same spot, he regained his composure and carried the bag for a few steps where one of the older kids took over.

Back at the lodge we enjoyed a lovely lunch. Michael, the chef, knows his craft and there is never a lack of delicious meals. Despite the harsh environment and the difficulty in transporting goods here, we realised that this truly is the land of milk and honey. We lazed next to the big swimming pool until it was time for our river rafting expedition. The guides have a great sense of humour and supplied hours of fun on the water.

At every rapid, my kayak partner and I kept hitting the rocks and I was in utter disbelief. Especially when deciding that we would go in a kayak together, everyone protested, saying that the two of us were the fittest and therefore had the most advantage. The third time we got stuck on the rocks, I heard him chuckling from behind, “It is funny how you are not able to do anything in the front when I determine which direction we go in at the back. I just see your paddle left, right and centre.” In between the laughter, the guides pointed out some birds of interest. This is the only place in the world where you can see the Cinderella Waxbill. The Rufous-tailed Palm Thrush is also a rare indigenous bird. Such sightings are therefore very exciting, but unfortunately I did not have the privilege to snap these two birds on this trip. Aside from fast fingers, you also need some luck. 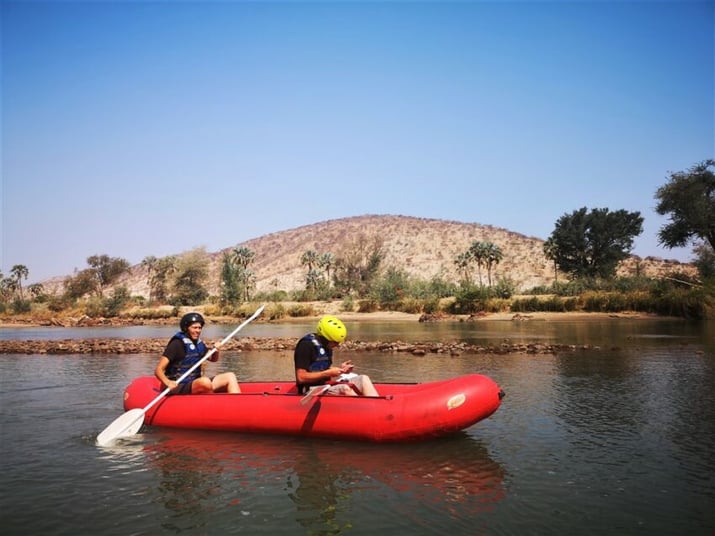 Later in the afternoon we booked a guided nature walk where we learned all sorts of interesting facts about the animals and the vegetation in the area. Our guide stopped in a dry riverbed and pointed while calmly saying, “snake.” Before we could start running or jump out of the way, we saw that it was just a snake trail left behind in the sand. He determined the direction that the snake went in by looking at the dried leaves surrounding the trail. We agreed to walk in the opposite direction, upon which he laughed and shook his head. If you are a local, you know that there is no major danger.

The highlight at the end of every day is the sundowner at the viewpoint over the magnificent Epupa Falls. “Epupa” means foam in Herero, a reference to the foam that results from the falling water. As we sipped on our cold beers, the harsh landscapes were doused in pastel colours – a soul-cleansing experience that is also ideal for sunset photos. 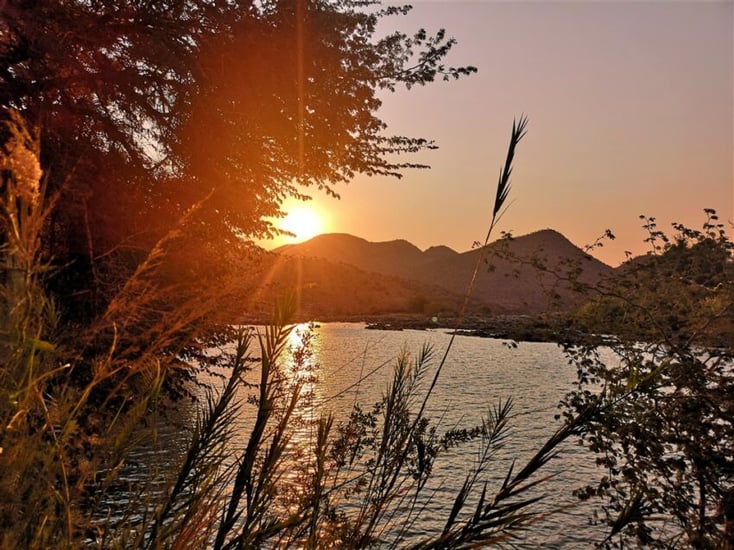 As a descendant of the Dorsland Trekkers, this region is of particular interest to me. Just a few kilometres to the west, my ancestors crossed the Kunene River with their ox wagons and horses when they moved from Angola to Namibia. “Dorsland” means “thirst land”, an aptly named historic trek through tough conditions in the rugged landscape, relentless sun, lack of fresh drinking water, and malaria. When people find out that I am a Dorsland Trekker descendant, it immediately feels like a compliment, as it will usually be followed by comments like “Oh wow, so you must be tough.” Even though it was not me seated in the back of that ox wagon, fighting off crocodiles to make it to the other side of the river without enough drinking water or easily accessible malaria medicine, I will gladly accept it.

Those bygone years are still commemorated annually when descendants of this group of resilient people get together near Swartbooisdrif. Although they needed hair on their teeth to survive then, today this is the land of milk and honey. Even more so because honeybees have decided this. After all, mankind’s existence depends on them. Therefore, paradise is wherever there is a bustling hive of bees. Christmas is never over in the north-western corner of Namibia. Come and discover the gifts yourself!

First published in the January 2020 edition of Michelangelo

Off the beaten track in Namibia

What makes Damaraland worth a visit?

Author – Annelien Robberts is an avid wordsmith who turns her pen to all things travel, culture, and lifestyle. She was born in a small town called Otjiwarongo and grew up on a farm nearby. Creativity, nature and animals make her happy.