They are hated, admired, condemned and underrated. Few people have been able to observe them in the wild for any length of time, and even less people know that the sounds they make are more like the chirping of birds than the barking of dogs. Most people regard them as vicious and bloodthirsty predators which devour their hapless prey alive. This is the common perception of African wild dogs, also known as Cape hunting dogs or painted dogs. 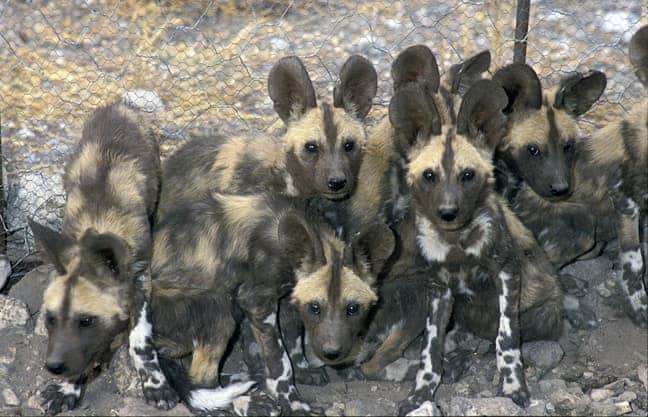 These colourful animals are among the most endangered mammals in southern Africa. They are fast and tireless runners and extremely skilful hunters, but traps, poison and bullets have diminished them to the verge of extinction. Farmers have pursued them mercilessly. Until just a few years ago wild dogs (Lycaon pictus) were still classified as problem animals in Namibia even though hardly any of them were left. They have since been proclaimed a protected species and may no longer be killed without very good reason.

The long-legged carnivores with the round ears used to occur all over Namibia. These days, wild dogs are only found in the Caprivi and Kavango as well as northern Otjozondjupa.

An attempt was made 25 years ago to reintroduce wild dogs to Namibia’s most famous game reserve. The deciding factor were seven pups which had been found in a cave in the Mangetti area of the Kavango region after the adult members of their pack had been poisoned and caught in gin traps. The pups were taken to Okaukuejo in Etosha National Park and initially Dr Frans Joubert, the vet who was stationed there at the time, took care of them. 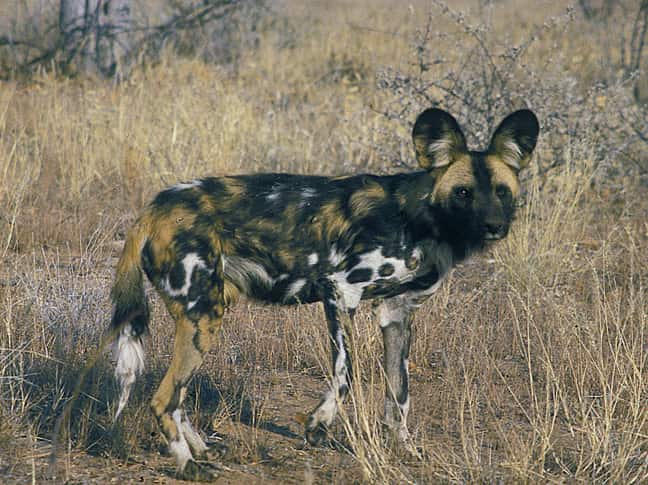 Flip Stander, now a world-famous expert on lions and other predators, was asked to prepare the wild dogs for their eventual release. He set up camp with them in a two-hectare enclosure with a high fence, near the Okawao waterhole in the western reaches of Etosha National Park. There the small painted dogs heard the many strange sounds of the bush and the wind carried the scent of antelope, black rhino, elephant and predators that visited the nearby waterhole. Sometimes they even caught a glimpse of these strange animals when they passed the enclosure at close range.

To prevent the pups from growing up all by themselves, Stander contacted De Wildt, a breeding station for rare animal species, near Pretoria in South Africa. De Wildt sent him an adult and a juvenile pair of wild dogs. The four newcomers were put into a five-hectare enclosure adjacent to that with the pups.

After a few days Stander decided to join the two groups and they bonded surprisingly well. The two older females immediately regurgitated pieces of meat for the pups. Several days later fierce fighting flared up between the adults and the juveniles. The hierarchy was sorted out and a pack was formed.

Stander continued to prepare the wild dogs for their life in freedom by letting them hunt for their own food. Springbok were released in the enclosure and the wild dogs soon knew how to catch their prey.

After several months the wild dogs were released. It was the first time in many years that this species once again roamed Etosha National Park. Stander and his colleagues were thrilled when the pack caught a springbok on its second day of freedom. Elation turned into disappointment, however. In many ways the animals were able to rely on instinct, Stander had helped to prepare them, but there was one thing he was unable to teach them: the necessary fear of lions. Lions killed one wild dog after the other because the wild dogs were unaware that the king of the beasts spelt danger for them. Only one member of the pack survived because nature conservation officials darted him in the nick of time and put him in a cage. Since then no attempt has ever been made again to reintroduce African wild dogs to Etosha National Park.