A road trip to The Delight Swakopmund in Namibia

As an intern at Gondwana and as a Namibian who loves to travel in my beautiful country, I did not hesitate to join my colleague Odile on a trip to Swakopmund in order to experience The Delight Swakopmund Hotel for the first time, and of course to get an exclusive sneak-peak at the behind the scene of the Gondwana videos.

On Friday morning 18 October 2019 we got the Namibia2Go Toyota Hilux ready, picked up two film crew members and left Windhoek at 11:00. I hadn’t been to the coast since December 2018, so my excitement level was high. Maybe the fact that we had a chance to escape the hot, dry inland for a few days also contributed to this joy. We arrived in Swakopmund at 15:30 and after a serious debate about why Chinese take-out was worse than KFC, a decision was made. After check-in we all ate dinner alone and had a free evening to explore Swakopmund.

On entering The Delight Swakopmund, I was warmly welcomed by the staff and was actually pleasantly surprised at how modern, stylish, and colourful the hotel was from the inside. We checked in at reception, received a shot of iced tea (or so I was told) and the receptionist joked that all of the rooms were booked but we could camp in the backyard. Filled with humour and fresh energy after a seemingly never-ending drive, we received our keys, and again I was surprised at how spacious the yard was with a safe parking lot considering that there were so many rooms. 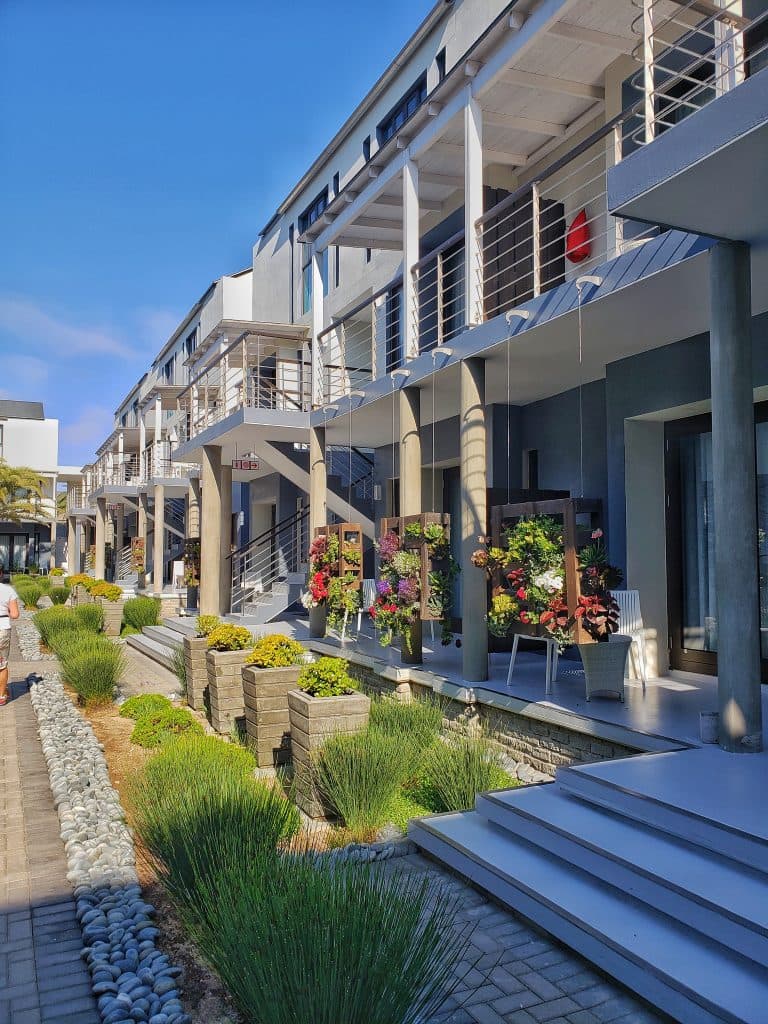 My suitcase was carried up to my room for me, which upon entering, I found was just as modern, with its blue, green and red simple yet stylish interior. I explored my spacious room and bathroom and found very easy instructions and guidelines on how to use all the appliances, such as the Nespresso coffee machine. 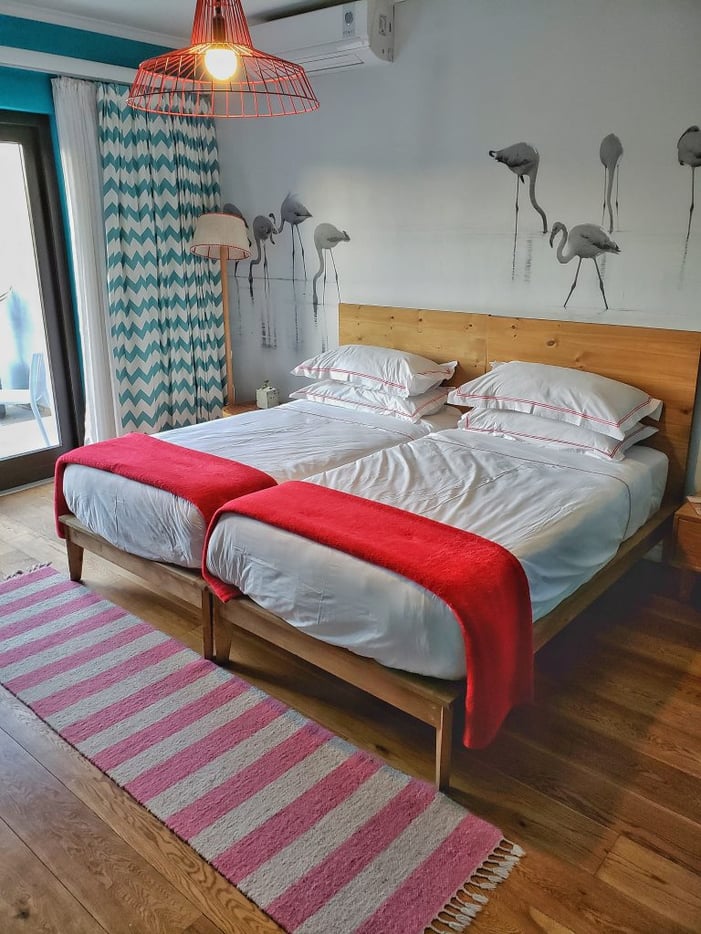 Excited to sleep in a hotel room (which is a luxury for me, as it doesn’t happen very often) I freshened up and went for a sundowner and dinner with a friend in the beautiful town of Swakopmund. Later that evening before bed I enjoyed a glass of red wine at the bar, which was served by a very experienced, easy-to-chat-to bartender and I couldn’t help but wonder how many stories of heartbreak, adventure and hilarious conversations he had experienced in his life so far.

On Saturday I woke up at 07:00, after a “delightful” sleep in my enormous, comfortable bed, made myself coffee and sat on the balcony to watch Swakopmund slowly waking up, all misty and refreshing. It was more than welcoming in our hot Namibia. The thought of breakfast and my curiosity for the design of the rest of the hotel sent me to the breakfast location on the first floor.

As I entered the room, a group of guests was chatting over scrambled eggs, the chef behind the counter was flipping an omelette and a friendly server, Anna, greeted me then guided me to an open table and poured fresh hot coffee into a cup. What more could one want? Well, the film crew went all out and enjoyed oysters and champagne for breakfast, which is a known highlight, but I preferred my croissant with a variety of cheeses, eggs, and tomato, and a fresh orange juice. 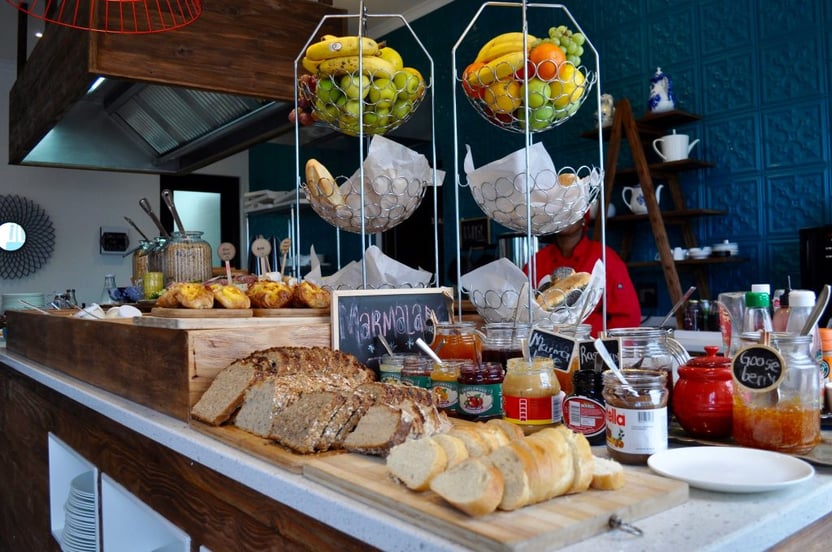 At 11:00, an adorable four-year-old girl arrived and we started shooting a video about how she received a waffle from the kitchen for breakfast. For me, being behind the scenes at a video shoot was a new experience and allowed me insight into all the considerations, preparations and steps that come along with it. The girl was beyond thrilled and motivated to receive her waffle with ice-cream and so the shoot went quickly and without problems.

After a short break the team drove to the well-known Swakopmund Mole and while Odile and I spoiled ourselves with iced coffee, the film crew took photographs of the area. After that activity was ticked off our to-do list, we waited for Oom Niels, our next video protagonist, and experienced and filmed how fresh snoek was brought in by a small boat and later how it was cleaned and prepared with coarse salt. The fish was packed away for the next day, which would be the highlight of the video shoot. More photographs were taken of the old bridge behind Tiger Reef to recreate old black-and-white photographs and once it became a bit chilly we decided to call it a day and went back to the hotel where a hot shower was waiting for me.

On Sunday morning I could barely open my eyes when the alarm went off at 05:30 and I could definitely not think of breakfast yet, but I got up, enjoyed my last wonderful coffee on the balcony, packed my suitcase, and checked out at reception. Once all members were in the Namibia2Go car, we left Swakopmund at 06:00 and headed to Walvis Bay to meet Oom Niels and his wife at their house. Following them out of Walvis Bay we drove all the way past the lagoon and the pink salt pans and up to Pelican Point, where I had never been before. On our way we saw a handful of jackals, one with her small but very curious puppies right next to our car, a lot of flamingos, pelicans, seals and even a few playful dolphins in the background.

We stopped at an old, rusted shipwreck on the beach at Pelican Point and set up the filming equipment, cameras, microphones, as well as the fireplace, a table laden with bread and potatoes, plates and more for the video. I then watched from a distance (as I was constantly walking into cameras and tripping over cables) how this video was shot, while Oom Niels, also known as The Barefoot Chef, demonstrated and explained how he traditionally braaied the snoek on the coals in the open, beautiful nature, surrounded by small waves washing up on the beach, which was covered by thousands of dried out crabs, shells and starfish. The sun was not in the mood to come out, so it was a little overcast, but our moods were joyful due to the spectacular and unique scenery and by the time we were finished, some sunrays peeked out.

Once the snoek was done and bread with apricot jam and potatoes were beautifully presented alongside Oom Niels’s impressive collection of stones, we were allowed to taste it. Our mouths were watering just watching him prepare it and I also hadn’t eaten freshly prepared fish in a while, so the entire team could have probably eaten three of them. The garlic, butter and lemon juice covered snoek was as delicious and softly braaied as anyone reading this can imagine and was perfectly complemented by the apricot jam sandwiches. Oom Niels’s son then brought a group of schoolgirls, who were encouraged to collect the rubbish along the beach and once they all met at the filming scene they were invited to join the late lunch consisting of more snoek, sandwiches and potatoes. Safe to say, there were no leftovers. 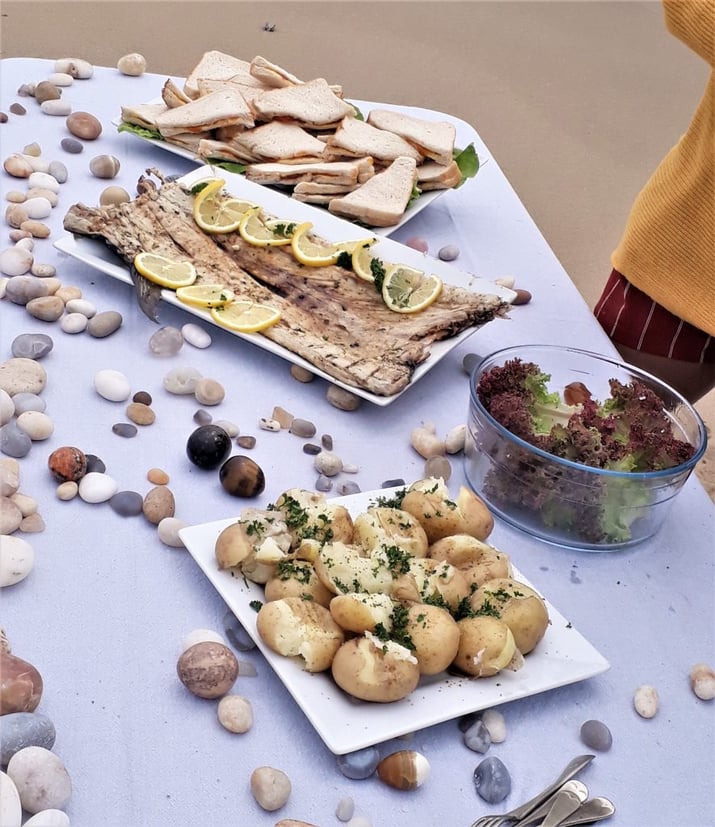 We packed up quickly and concluded our farewells as the rugby was about to start and many were eager to get home in time to watch. The team paid a visit to Levo charters in Walvis Bay to take one last shot of the harbour before we settled into the car for the long drive to Swakopmund and then back to Windhoek.

Before I end my story, can I quickly mention how we decided on a quick pit stop in Usakos to buy biltong and regretted it immediately, as we were almost roasted by the sun and incredibly hot and strong desert wind, walking back to the car. The air conditioner was turned up to the highest level, we were equipped with cold drinks, biltong, and good road-trip music and some very sleepy team members decided to take a nap as we made our way back to the dry inland, towards Windhoek, wishing we could have spent just one more day at The Delight Swakopmund Hotel.

So, what are you waiting for... it’s your turn to delight yourself with a stay at The Delight Swakopmund.

Author –  Hi! I am Elke, a born and raised German-Namibian. I love to travel around and explore different cultures and places, but my home country always magically draws me back home again. Oh, and if it involves food, count me in on the adventure. 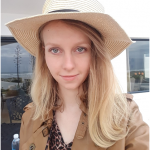 Why Customer Service Awareness in Namibia is important 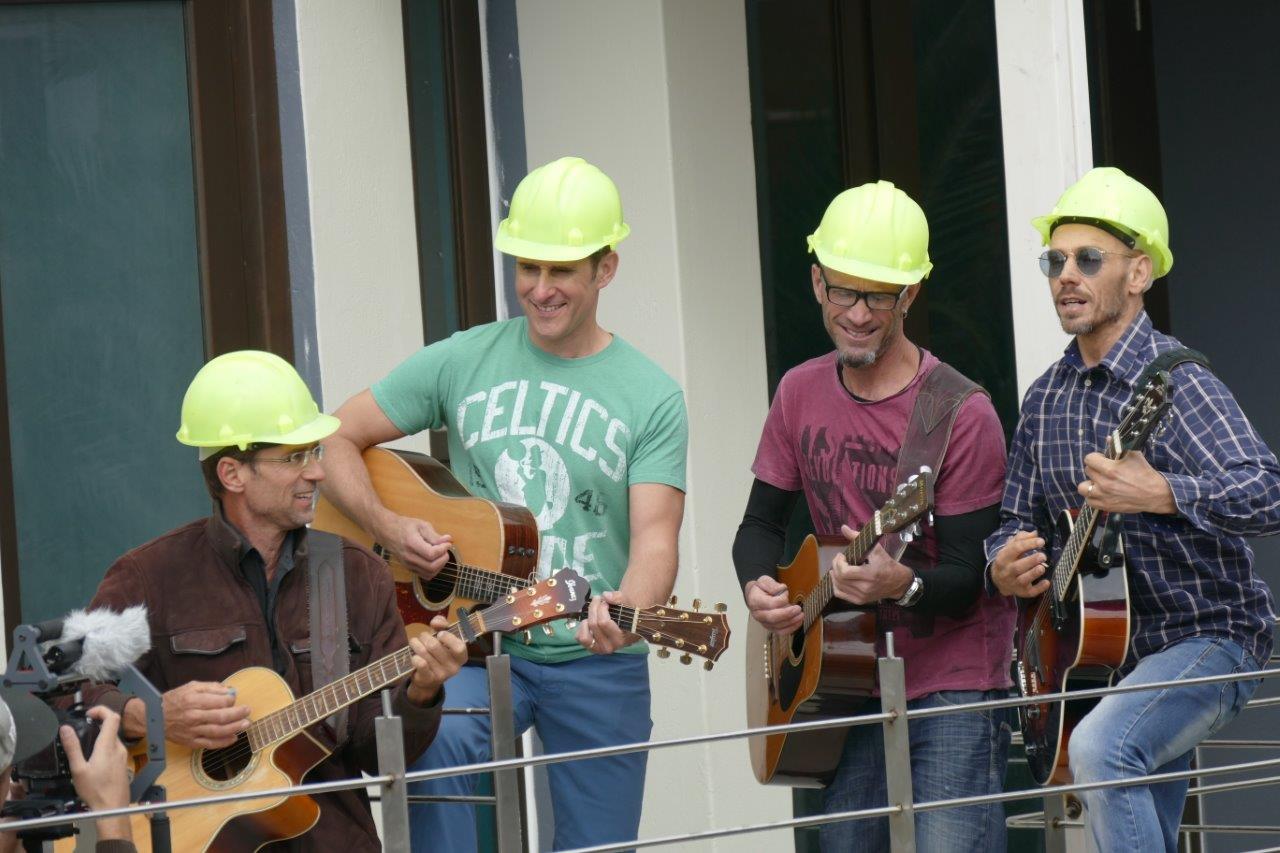